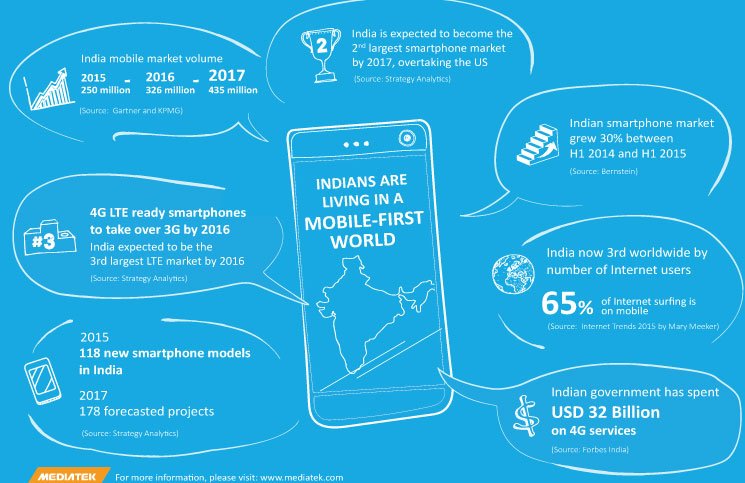 Yesterday, Mediatek announced its partnership with Micromax to supply their chipsets to the later in their smartphones. Micromax will use Mediateks chipsets in their mid to high-end smartphone’s. An Infographic also came our way, which reveals some interesting facts about India’s mobile phone culture. The most prominent one that caught our eye is that India is the third largest consumer of Internet. 65% of it coming from mobile phones. No wonder most app builders and marketer’s are scrambling to have a digital foot print in a big manner.

Another interest fact that gets highlighted in this infographic is that the mobile phone market will grow to 435 million by 2017. Almost doubling itself up in when compared to 2015. More and more smartphone models will be launched as we go ahead, too. Sulabh Purihttp://www.gadgetbridge.com
Sulabh Puri is the Editor In Chief of GadgetBridge.com. A content specialist, he started his career young and it has been a rewarding 15 years for him. Before heading Gadget Bridge, he was the Editor of Times of India (TOI) Technology and GadgetsNow.com. He has also led TOI’s international edit arm as the Editorial Head of Business Insider India and Tech Radar India. He has also worked with various media houses such as the India Today Group and Cybermedia. He loves everything ‘gadgety’ and enjoys tinkering with new tech toys and automobiles. A graduate in commerce from Delhi University, he is also an adept graphic designer. When he is not working, he can be found in the kitchen, cooking mouth-watering chocolate cakes and croissants.
Facebook
Twitter
WhatsApp
Linkedin
ReddIt
Email
Previous article
Samsung launches the latest Galaxy Tab S2, the world’s slimmest tablet
Next article
Sony to bring its three new next-generation smartphones Xperia Z5 Premium, Z5 Compact and Xperia Z3 soon to India