BookMyShow Stream will be offering over 600 movie titles and 72,000+ hours of content 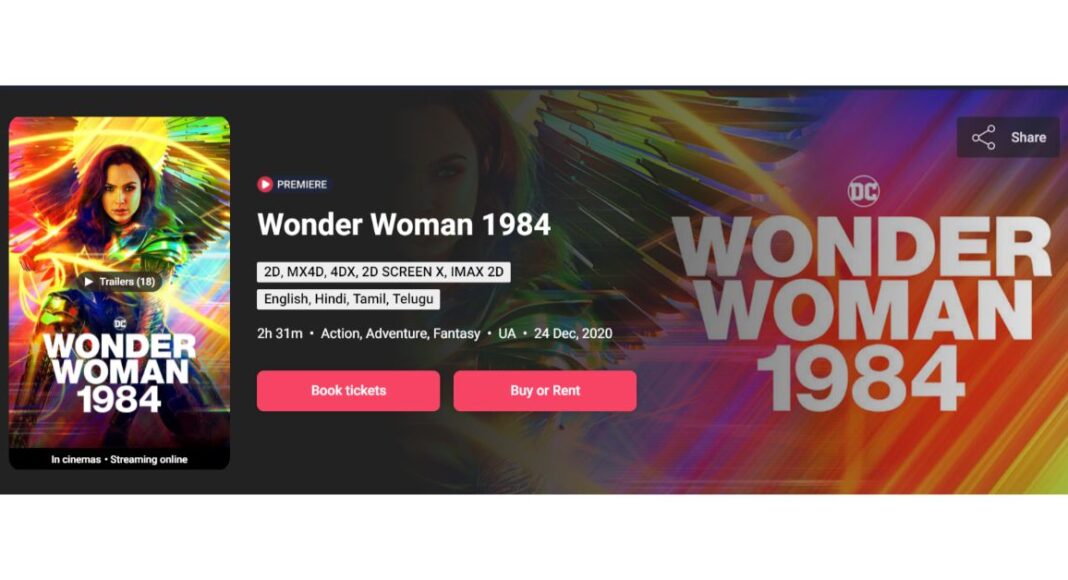 The online ticket booking website BookMyShow has announced the launch of its own video streaming platform. The in-house online streaming platform namely BookMyShow Stream will allow the users to buy or rent the movies they want to see. Additionally, it will also include the recent blockbusters which are still running in the theatres without having to go to the theatres. Movies such as Tenet and Wonder Woman 1984 will be available to be streamed via  Apple TV and Google Play in India. To offer the service the company has partnered with Sony Pictures, Warner Brothers, and Universal Pictures for international content and with major Indian production houses namely Viacom18, Shemaroo, Rajshri Productions, Divo, and Sillymonks to offer Indian content.

BookMyShow has launched BookMyShow Stream that is its in-house new video-on-demand streaming platform. This new online ticketing platform will be offering more than 600 movie titles along with 72,000+ hours of content viewing. The users will be able to buy or rent from a curated catalog of exclusive titles, including the best of classics, award-winning movies, select premiers, and never-seen-before festival favourites. Due to the COVID-19 pandemic, the entertainment business has been hugely affected and till the cinema halls become fully functional the BookMyShow Stream video-on-demand streaming service will also allow the users to buy and rent recent blockbusters that are still running in the cinemas.

The new video-on-demand streaming platform by BookMyShow will feature multiple marquee premieres every Friday. Movies such as  Tenet, Wonder Woman 1984, Yes God Yes, The Craft: Legacy will be available on rent or purchase on Apple TV and Google Play, BookMyShow website, Android TV, Fire Stick, and Chromecast for streaming in India. If a user buys a movie then it can be watched anytime but if they choose to rent it then not only will it cost you less but you have access to the movie for only 30 days and once the playback begins you have to finish it within two days. One can rent  Wonder Woman 1984 at Rs 549 and can be bought at Rs 799.

As per the listing, all the movies will be viewable in HD quality.  You can watch them online on any platform, including your phone, laptop, desktop or TV. It will offer services like Friday Premieres, Exclusives, World Cinema, Missed in Theatres, Festival Favourites along with multiple titles.

Komila Singhhttp://www.gadgetbridge.com
Komila is one of the most spirited tech writers at Gadget Bridge. Always up for a new challenge, she is an expert at dissecting technology and getting to its core. She loves to tinker with new mobile phones, tablets and headphones.
Facebook
Twitter
WhatsApp
Linkedin
ReddIt
Email
Previous articleGoogle Fit app to roll out the ability to measure heart rate and respiration on Pixel phones using cameras
Next article10 gadgets to keep your home clean