OnePlus 7 vs Samsung Galaxy A80: Comparison 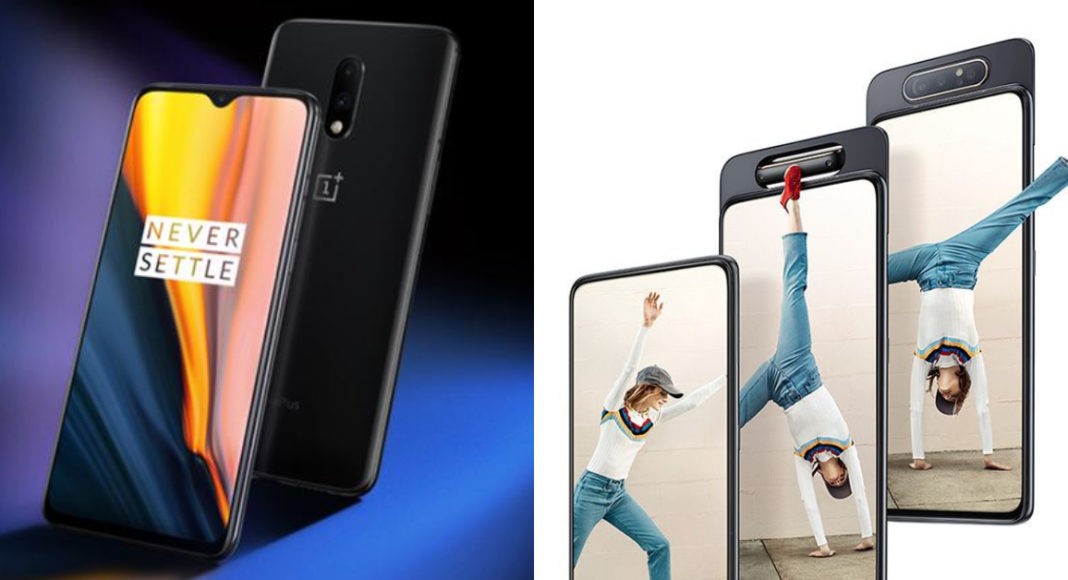 After months of teases, renders and leaks, the OnePlus 7-series has finally launched. While OnePlus 7 Pro is the more talked about smartphone right now, but the OnePlus 7 is the true successor of the OnePlus 6T.

It is priced slightly higher than its predecessor and has specifications higher than it. Some of the highlights of the OnePlus 7 includes a Snapdragon 855 SoC, up to 8GB of RAM and UFS 3.0 storage. The OnePlus 7 is priced at the Rs 35,000 – Rs 40,000 price point and in this range some of the most spec-filled smartphones.

One of them is the newly launched Samsung Galaxy A80 which comes with a rotating camera setup. Here, we are comparing the two newly launched smartphones with some of the most advanced and new features – the OnePlus 7 and the Galaxy A80. Read on to find more about them:

Samsung Galaxy A80:  Android 9.0 Pie is skinned with Samsung’s One UI

On comparing these two smartphones, we find out that both come with technology and features unlike the other. Both of them have a unique selling point which is their main strength. So, whatever device the user chooses he won’t be wrong in his choice as they both are good and specifications filled smartphones.

Aman Singhhttps://www.gadgetbridge.com/
Aman Kumar Singh has a Masters in Journalism and Mass Communication. He is a journalist, a photographer, a writer, a gamer, a movie addict and has a love for reading (everything). It’s his love of reading that has brought him knowledge in various fields including technology and gadgets. Talking about which, he loves to tweak and play with gadgets, new and old. And when he finds time, if he finds time, he can be seen playing video games or taking a new gadget for a test run.
Facebook
Twitter
WhatsApp
Linkedin
ReddIt
Email
Previous article
OnePlus 7 Pro vs Samsung Galaxy S10: Comparison
Next article
Compare: OnePlus 7 Pro and OnePlus 6T