Realme Narzo 10 and Narzo 10A to finally get launched on May 11 in India. 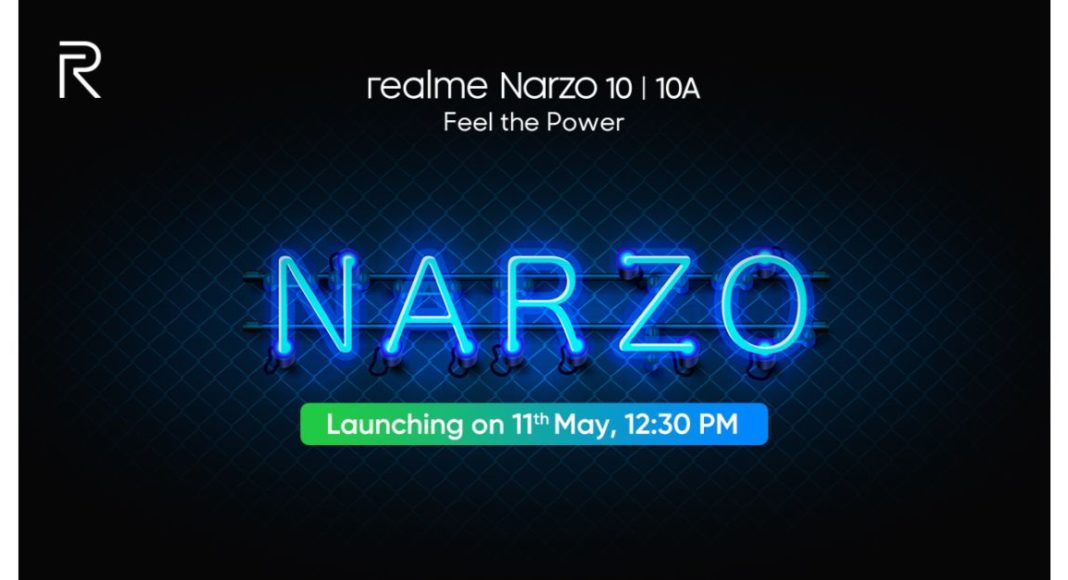 The Chinese smartphone company Realme has officially announced the final launch date of its upcoming Nazo series in India. As decided the company will launch its all-new range of smartphones next week on May 11. The new series will include Narzo 10 and Narzo 10A smartphones. Previously the company has delayed the launch of its new product due to coronavirus lockdown but now that the government has given relations to the e-commerce platforms to start the sale of smartphones the company will be unveiling the new devices via online launch event.

In the beginning, the company had scheduled the launch of its new Narzo series on March 26 how it got cancelled after the government imposed lockdown in the country for 21 days. Then again Realme decided to introduce the series after the lockdown on April 21 but due to extended lockdown, the company had to cancel the launch event again. Now the Narzo series is confirmed to get launched on May 11. To announce this the company has also shared a poster to reveal the official launch date for Realme Narzo 10 and Narzo 10 A. It will be unveiled via an online launch event that will begin at 12.30 noon in the. The event has already been recorded and will be live-streamed across all its social media channels including YouTube.

Get ready to #FeelThePower.
Unleashing the bold and the unique, #realmeNarzo10 and #realmeNarzo10A!
Launching at 12:30 PM, 11th May on our official channels.
Know more: https://t.co/hQGc0tJYkA pic.twitter.com/BiPjOCI5fs

According to a tipster, the Realme Narzo 10 is expected to be priced at Rs 15,000. The device is said to be a rebranded variant of Realme 6i that was introduced in Myanmar months back with a price tag of  MMK 249,900 that translated to Rs 13,600. Whereas Realme Narzo 10A is also said to be the rebranded model of Realme C3 that arrived in Thailand with few changes in the hardware. Realme C3 is priced at THB 3,999 that is translated to Rs 9,400 for the 3GB RAM with 32GB storage.

According to some previous leaks Realme, Narzo 10 is supposed to feature a 6.5-inch HD+display with 720×1,600 pixels of resolution. It is expected to be powered by a MediaTek Helio G80 processor with up to 4GB of RAM. he smartphone is confirmed to come with a quad rear camera setup including a 48-megapixel sensor. There will be a 16-megapixel selfie camera and a 5,000mAh battery.

While on the other hand Realme Narzo 10A is most likely to be powered by MediaTek Helio G70 chipset. It is expected to feature a  6.5-inch HD+ display and a 5,000mAh battery support. It is said to feature a triple rear camera setup along with a 12-megapixel main sensor. The smartphone is suggested to sport a rear fingerprint sensor for security.

Komila Singhhttp://www.gadgetbridge.com
Komila is one of the most spirited tech writers at Gadget Bridge. Always up for a new challenge, she is an expert at dissecting technology and getting to its core. She loves to tinker with new mobile phones, tablets and headphones.
Facebook
Twitter
WhatsApp
Linkedin
ReddIt
Email
Previous article
Xiaomi to launch Mi 10, Mi Box and Mi True Wireless Earphones 2 Today: Here is how to watch the event live
Next article
Vivo Y30 with quad rear cameras and 5,000mAh battery launched: Specifications and other details