HomeOther TechAppsDating then and now: Tinder reveals what all has changed

Dating then and now: Tinder reveals what all has changed 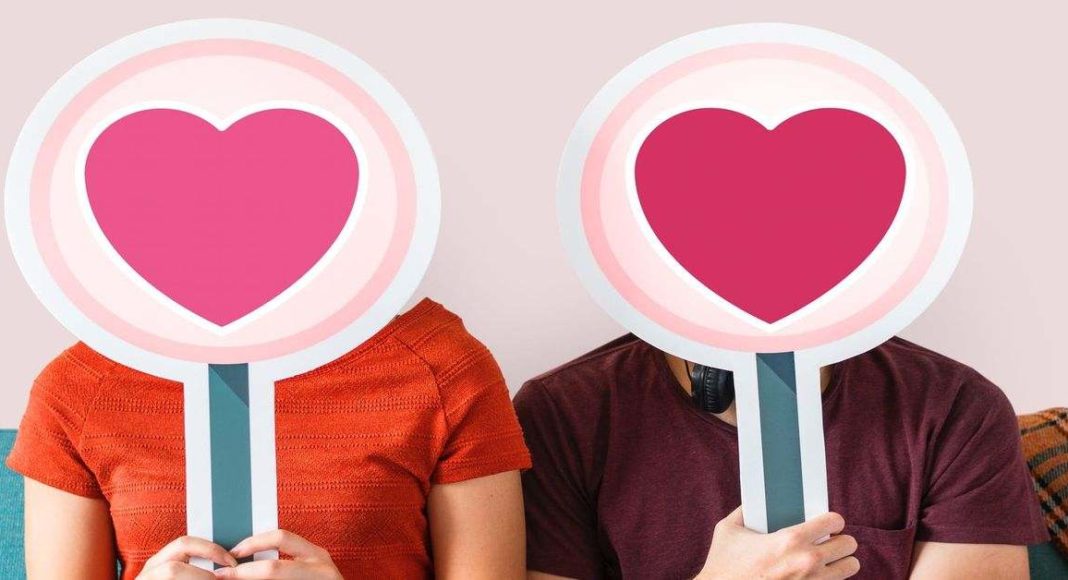 Three date rule, play hard to get, men should pay, dress your best: We all have heard this dating advice at some point in our lives. These dating rules are taught to us by our friends, siblings or even our favourite movie characters.

But then, dating in today’s world is nothing like what it was when these so-called rules were made. Asking someone out over a WhatsApp text no longer raises eyebrows. It is actually the only acceptable way to do it now. So the question arises whether these rules even apply in today’s day and age. And how many people even follow them?

Dating app Tinder has attempted to answer our questions by conducting a survey among its Indian users and we have to admit, the insights are very interesting.

To begin with, around 85% of Indians think that the profile picture is the biggest turn-on factor when they are looking at someone’s profile on an online dating website or an app. To be more specific, 86% of the men who were a part of the survey said that the profile picture is the most important thing while 83% of women agreed. However, we should point out that 86% of women voted for hobbies and 87% said education was the most important criteria. As far as common interests go, more number of men take them into consideration while looking for a partner online. 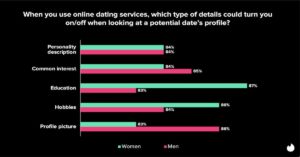 When asked about who should organise the first date, 50% of the participants said that it doesn’t matter. 28% said that they would want to be the ones who arrange the date and 22% believe that the other person should take the initiative. 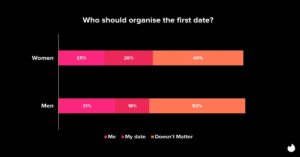 A big change in dating pattern was revealed by the survey. While most of us have grown listening to people tell us not to text our potential partner too soon after the first date, 71% of the participants said they would do so within a day of the meeting. 16% said that they would wait for the next day and 7% said that they wouldn’t contact their date via a text message at all. 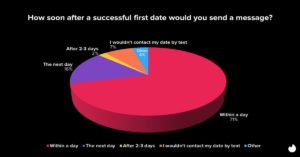 The survey even asked who should actually send the first text message after a good first date. And seems like Indian youth doesn’t care about this too, as 45% of the participants said that it really doesn’t matter who texts first. 30% said that they would text their date if the first meeting is good enough and 25% said that they would wait to get the text. 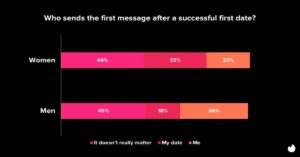 Coming to the second date, Indian youth seems to be ditching gender roles as 48% think that it doesn’t matter who arranges for the second date. 30% of the participants said that they would want to be the ones who do it, while 22% would expect their date to do it. 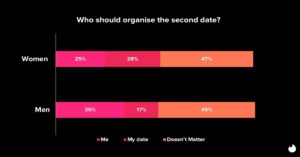 And gone are the days when people told each other through common friends that they like each other. Now, 48% said that they would do it themselves with a cute message on WhatsApp. A phone call and a face to face conversation followed and means like a handwritten love note didn’t have too many takers. 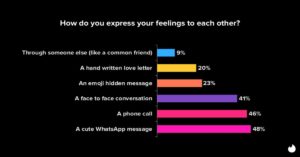 Another key finding of the survey is that among the new dating behaviour, like ghosting or benching, playing it cool is the one that is the most common with Indian singles. Messaging but not meeting, sexting, and disappearing suddenly follow. 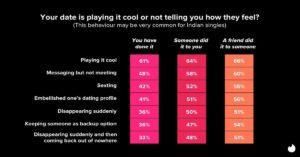 Tinder has mentioned that the survey was conducted on 1,500 Indian singles from seven cities, across the 18-34 age group who own a smartphone.

Avani Baggahttp://www.gadgetbridge.com
Avani has an immense love for reading, travelling and food, but not necessarily in the same order. Avani almost started pursuing law, but life had other (better) plans for her and she chose to be a writer instead (luckily!) She previously covered technology at Times Internet and wrote about smartphones, mobile apps and tech startups. When she’s not writing, you’ll be able to find her in book stores or catching up on her social life.
Facebook
Twitter
WhatsApp
Linkedin
ReddIt
Email
Previous articleMoto G7 Power price, availability date in India revealed
Next articleXiaomi Mi Mix 3 5G variant to launch on February 24 at Mobile World Congress 2019