Here is an easy way.

Google has always impressed us with the improved security in the upgraded versions of Android smartphones and tablets. So now, no more intruders can gain access to an Android device even after formatting it. This is possible due to the Google FRP lock and it’s available mostly in the Samsung and LG device models.

It prevents any fraudulent activity from being performed on your device. However, it creates a problem for the real owner if he forgets the Google credential or purchases a formatted used phone. If that’s the case with you too, then you have to know the trick to bypass Google account. Here, you are going to know it using an FRP bypass tool.

Part 1: How to Bypass FRP

Wondering how to bypass FRP lock? Well, many people like you are looking for a solution. Earlier, it was too tough to break the FRP security in Android devices. And guess now? It has become a lot easier due to the existence of the FRP bypass tool.

Gone were the days when bypassing Google FRP was a next to impossible task. It has now been simplified with the introduction of Dr.Fone – Screen Unlock (Android), a Android lock screen removal tool. This tool comes with the potential to break the 4 types of screen locks – PIN, Password, Pattern, and Fingerprints. No more you will need the PIN or Google account to bypass the FRP lock. Even someone with no technical background can use this Android lock screen removal software.

Steps to Use Dr.Fone – Screen Unlock for Android to Bypass FRP Samsung

If you have bought a second-hand device Samsung device, which still contains the previous owner’s Google account, bypass it with Dr. Fone – Screen Unlock (Android) conveniently. Especially in the case of  S7/S8 devices, the methods are pretty helpful when you don’t know about the OS version. You can go through the steps below to find out how to do it:

Step 1: Power Off the Device

Before proceeding with the Samsung FRP bypass, you have to download the Dr.Fone – Screen Unlock on your PC. Next, connect your locked Samsung device to it. Make sure your Samsung device is turned off. Now, you have to press and hold three buttons together – “Volume Up”, “Bixby”, and “Power” buttons. As soon as the Samsung logo appears on the screen, release the keys immediately. 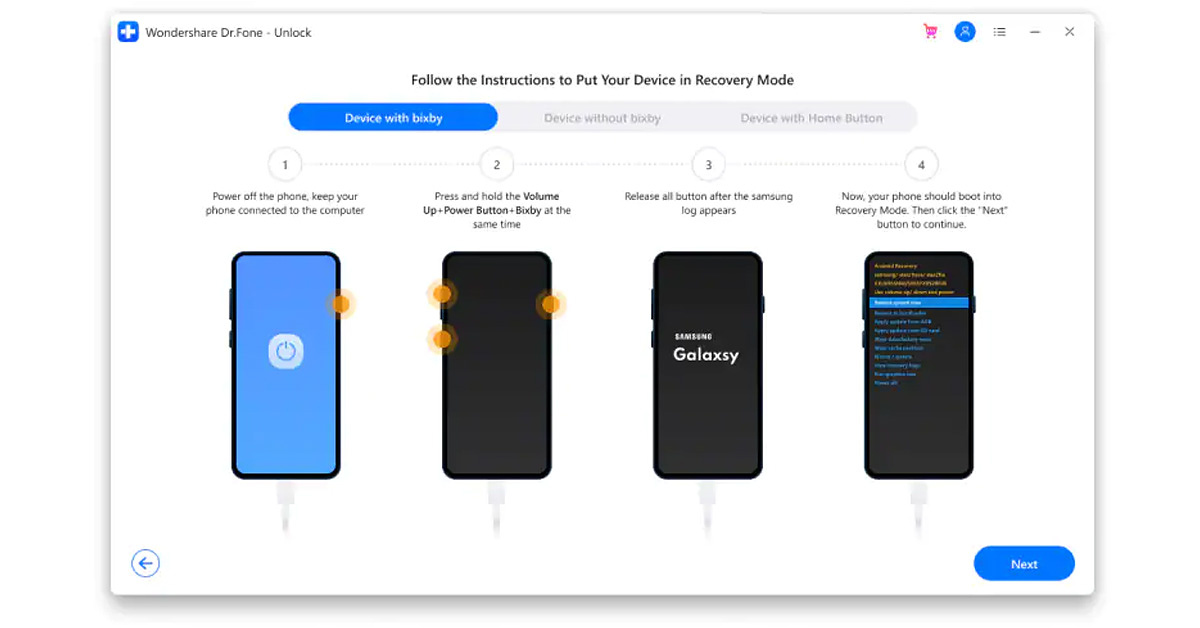 Now, your device will start booting in the recovery mode after you release the keys. Just click on the “Next” button and move on to the next step. The tool will display your device’s OS version in a big numerical size. To bypass the Google account verification lock, you need to pick the system version of your phone. Once identified, you can use the Dr.Fone “Unlock Android Screen and FRP” feature to bypass the FRP lock. 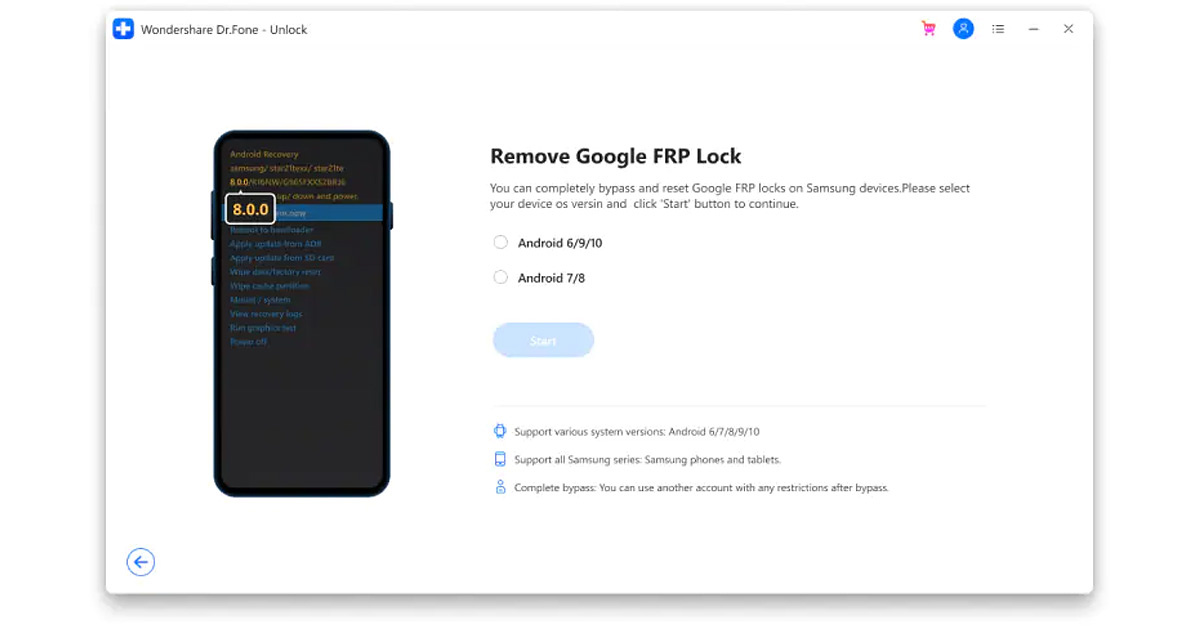 Part 2: Is There Any Risk Related to this FRP Bypass tool?

In short, no! If you’re hesitant about trying out this software, there’s nothing to fear. However, we know whenever a person tries something new, the risk is always there but don’t let it stop you from doing what’s right.

Dr.Fone – Screen Unlock (Android) is completely safe and promises to be a useful tool for breaking free from your phone maker’s restrictions. It is available for both iOS and Android smartphones. It’s a completely risk-free solution to remove the screen lock or bypass the FRP lock. Lost your Google account or forgotten the PIN code? Don’t worry! Let Dr.Fone handle it alone.

So, there you have it. In this post, we’ve demonstrated a way to bypass the Google account verification lock that is free and easy to implement. And we’ve done so in a way that doesn’t rely on any dodgy ADB commands or nefarious software.

Dr. Fone – Screen Unlock is a trustworthy unlocking application, which bypasses FRP lock without any hassle. While there have been other ways to bypass the security prompt implemented by Google, this method is the most reliable way to do so with zero damage to your phone.

But a simple tip to remember is that you should take a backup of your device data to avoid any problems in the future. For more tutorials, keep reading our blogs, and appreciate by sharing.