Home Reviews Asus ROG Phone 2 Review: Any gamer would love to have this...

Asus ROG Phone 2 Review: Any gamer would love to have this smartphone!

Is Asus ROG Phone 2 the perfect gaming smartphone for you? 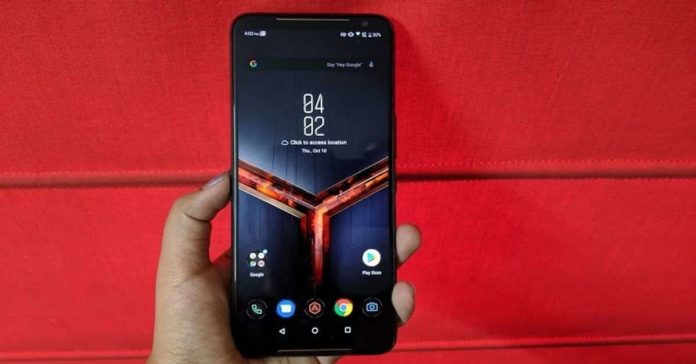 Asus recently got its gaming-centric ROG Phone 2 to India. Available at a starting price of Rs 37,999, the device has a number of features that are aimed at gamers and is powered by Snapdragon 855+ SoC and houses a 6,000mAh battery. On paper, it sounds like quite a performer and we spent a few days with it to know how it is like to use. Read the rest of our review of Asus ROG Phone 2 to find out more about it:

Asus has always kept the products in its ROG range aimed at gamers. Most products in the ROG range look swanky and have been designed in a way that makes gaming a great experience. Asus ROG 2 smartphone is no exception to this rule. The back panel of the smartphone has the ROG logo and an exposed air vent that has orange highlights running along it. If we compare it to its predecessor, there are a number of changes in the design. To begin with, the Asus ROG Phone 2 is more sleek and tamed than the first device in the series. Most of its elements look more subtle than its predecessor’s and it is also darker in shade when compared.

It is also worth mentioning that the new gaming handset is bigger in size than the Asus ROG Phone and at 240g, it is heavier in weight too. The right edge of the smartphone houses the power and volume buttons and the company’s AirTrigger system while the left side has the SIM tray, a port for attaching accessories as well as an additional Type-C charging port. The bottom edge of the handset has a 3.5mm headphone jack and a charging port too. 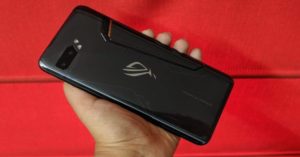 The front panel of the handset is dominated by its 6.59-inch AMOLED full HD+ display that has a refresh rate of 120Hz, HDR-10 and according to the company, the Delta E average of the smartphone is less than 1. The screen of Asus ROG Phone 2 is protected with a layer of Corning Gorilla Glass 6 on top. It is worth noticing that unlike most other smartphones that have been launched recently, Asus ROG Phone 2’s top and bottom bezel is thicker than the ones on the side.

Asus has added 3D vapour chamber system in the device to keep it cool during long sessions of gaming and besides this, there is a new dual vibration system too. The company has also said that the smartphone has four Wi-Fi antennas for best recpetion.

In our opinion, the Asus ROG Phone has truly been designed for gamers. Asus has paid great attention to details when it comes to the design of the smartphone. Each aspect of the design that has been tweaked by the company will make gaming a better experience for users. For instance, because the device has two charging ports, users will face no problem attaching headphones to the phone and charging it at the same time.

Coming to the display of the smartphone, it is another highlight of Asus ROG Phone 2. The colours are vivid and bright, and remain consistent at various viewing angles. While the handset is primarily aimed at gamers, it will also be liked a lot by those who love watching videos. It is great for watching 4K and HDR content. We spent hours watching videos on it and never felt like keeping the phone down, because the experience was so immersive and captivating. Besides this, a feature that we found to useful is that one can choose which icons they want in the status bar. 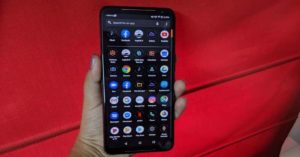 It is also worth noticing that in the settings of the smartphone, you can choose between 60Hz, 90Hz, and 120Hz refresh rates for the display. However, the sunlight readability of the device could definitely be better. We didn’t find it easy to use the handset even for basic stuff under the direct sunlight. But then, rest everything about the screen of the Asus ROG Phone 2 is superb. We would still call it one among the device’s best features.

Before speaking about the performance of the device, we’ll talk about the specifications of the Asus ROG Phone 2. Powered by the Qualcomm Snapdragon 855+ SoC processor, the handset comes with up to 12GB of RAM and 512GB of internal storage. The smartphone runs ROG UI based on Android 9.0 Pie and houses a massive 6,000mAh battery that has support for 30W fast charging technology.  The Asus ROG Phone 2 sports a dual rear camera setup that comprises of a 48MP primary sensor and a 13MP wide-angle sensor that offers a 125-degree field of view. For selfies and video calls, there is a 24MP front shooter. The mobile comes with an in-display fingerprint sensor and also has facial recognition.

Coming to the software of the Asus ROG phone 2, there are a number of customizations that Asus has made. To begin with, there are two themes that you can choose from: One is the ROG theme and the other one is closer to the regular Android theme found in most smartphones. Asus has also added a performance mode to the device called the X Mode. Although there isn’t too much bloatware in the device, you will find a few apps like Asus Data Transfer app and Armoury Crate besides the usual suite of Google apps. Asphalt 9: Legends was pre-installed too. One very useful feature for gamers is Game Genie. It enables the user to perform a number of functions like configuring AirTriggers, running live-streams on various social media platforms and lets you keep a track of useful information like framerate and system temperature in real-time. If you are a hard-core gamer, chances are there are a number of features of Game Genie that you will find useful. 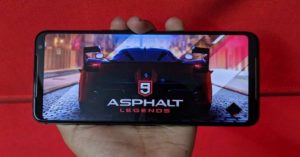 Now, let’s talk about the performance of the smartphone. With Qualcomm‘s Snapdragon 855+ SoC, one can rightly expect the handset to be an excellent performer. And we have to say that Asus ROG Phone 2 did meet our expectations. No matter how heavy our usage was, the handset could handle anything. With a refresh rate of 120Hz, the smartphone was super-quick in performing any and every function. The heaviest of apps launched instantly and no matter how many tasks we performed together, it was a cakewalk for the smartphone to handle it.

Needless to say, gaming is the best aspect of the smartphone. We have to say that it is definitely among the best smartphones that one can consider buying if gaming is a priority for them. We played numerous levels of heavy games like Asphalt 9: Legends on the device and the performance of Asus ROG Phone was simply flawless. Even if we played games for hours at a stretch, we noticed no lag in the performance of the device. While it did warm up a bit after prolonged gaming, it only took 5-10 minutes to get back to normal when we took a break.

As we mentioned earlier, the handset has a number of modes and features that are dedicated for gaming including the X Mode, Game Genie and Armoury Crate. On pressing a Red coloured icon on the Home Screen, you will be taken to Game Lobby. Here, you will have the option of enabling ‘No Calls’, ‘No Alerts’, ‘X Mode’ and ‘Clear Memory’. You can pick the ones that you like before you begin gaming. The Game Genie can be accessed here by swiping right from the top edge of the phone while you are in this section. It will show you shortcuts to perform various functions like ‘Speed Up’, ‘AirTriggers’, ‘Lock Touch’, ‘Record’ and more. There are a lot of features that you will find useful if you are a gamer. Like we said earlier, we played numerous levels of graphic-hungry games like Asphalt 9: Legends and we did not experience any lag even once. In fact, due to lack of calls and alerts in the mode, our experience was only enhanced.

Another aspect of the smartphone that is worth talking about is its 6,000mA battery. Even with very heavy usage involving hours of gaming, browsing social media apps, using the device for photography and navigation and watching shows on Netflix, the smartphone’s battery easily lasts a day and a half. Battery life is an aspect of the Asus ROG Phone 2 that you cannot be disappointed with no matter how heavy your usage is. With the 18W charger that we got with the handset, it took a little less than two hours to be charged from 0 to 100%.

The call quality of the device was good too. We didn’t encounter any problem with it during our time with the smartphone. We had no trouble receiving or making phone calls even from areas like basements.

Now, let’s move on to talk about the cameras of the Asus ROG Phone 2. The handset has a 48MP Sony IMX586 sensor as its primary lens coupled with a 13MP wide-angle sensor. On the front, there is a 24MP selfie camera. The performance of the cameras of the smartphone, unlike most of its other aspects, was not very consistent.

However, we cannot say that we were impressed by the low-light photography of the device. The images lacked clarity and were at times grainy too. However, enabling the Night mode did improve them.

Coming to the selfie camera, it also managed to do a good job in well-lit areas, but its performance in dimly lit areas wasn’t as good.

To conclude, we would say that at a price of Rs 37,999 (and discount of additional 10% on various bank cards), Asus ROG Phone 2 is great buy. You would not regret buying this smartphone simply because it is such a good performer. It has an amazingly smooth performance and the battery lasts really long no matter how heavy the usage is.

The display is another aspect of the device that is very good. The only one aspect that doesn’t match up to the rest is the camera. Although in well-lit conditions it performs well, its performance in dimly-lit conditions wasn’t as great. But if you can live with that, we can’t recommend a better gaming smartphone to you. If you like gaming, Asus ROG Phone 2 is one of the best handsets we can suggest you to buy.

The e-commerce website Flipkart is hosting Daily Trivia Quiz. Every day it brings a bunch of new questions for its users. By answering them...
Read more
Mobiles

Last month Garena announced its 2021 esports plans for Free Fire in India. This year it will be hosting 4 tournaments across two pro...
Read more