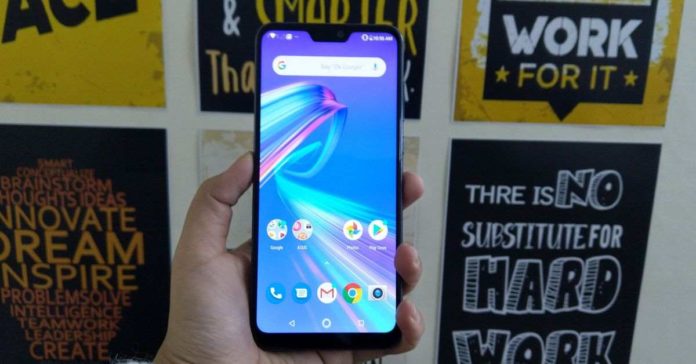 Let’s start with the design of the smartphone. Asus Zenfone Max Pro M2 looks more premium than its predecessor and its good looks show that the company has invested thought and time into its design. The new offering from Asus is available in two colour options – Blue and Titanium, and the one that we got for review was dressed in Titanium. Asus Zenfone Max Pro M2’s back panel is laminated and has a glossy finish. This, in fact, is primarily what makes the smartphone look so premium. It does attract more fingerprint smudges than its predecessor, but then that can’t really be compared as Asus Zenfone Max Pro M1 mobile came with a metal back panel. The back panel of Asus Zenfone Max Pro M2 houses the vertically stacked dual rear cameras in a module that also includes the LED flash. The fingerprint sensor of the device is placed in the centre and right beneath it lies the Asus branding. The front is dominated by a 6.26-inch display that has a notch on the top and is protected by Corning Gorilla Glass 6. 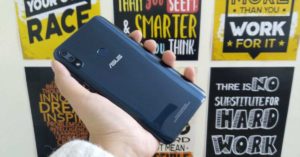 Asus has claimed that Zenfone Max Pro M2 is the first smartphone in the price segment to come with Corning Gorilla Glass 6. Coming back to the display, it is outlined by thin bezels on the sides and the top, and has a slightly broader chin at the bottom. It is worth noticing that Asus Zenfone Max Pro M2’s earpiece is not placed inside the notch, but instead, it lies more towards the top part of the frame. The company has done this in order to decrease the size of the notch.

Asus Zenfone Max Pro M2 has plastic side edges that house the power and volume buttons on the right and SIM tray on the left. The bottom edge has the microUSB port, the primary microphone, the 3.5mm headphone jack and the speaker grille. The secondary microphone is placed on the top.

There are a number of the things that we liked about the design of the device. Firstly, it is extremely comfortable to use the smartphone with one hand. The power and volume buttons and the fingerprint sensor are all placed well and are easy to reach. During our time with the smartphone, the fingerprint scanner worked really well. 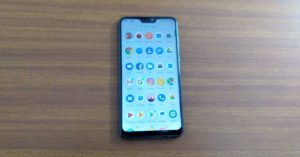 Coming to the 6.3-inch Full-HD+ display of the smartphone, it is another aspect that we really liked. The screen produced very sharp and clear images with accurate colours. When we tried looking at the screen from different angles, the colours did not lose their consistency. The sunlight readability was not a problem either. We spent long hours playing games and watching YouTube videos on the device and we loved every bit of it.

Before we start talking about the performance of the device, we’ll take a minute to shed some light on its specifications. Asus Zenfone Max Pro M2 is powered by an octa-core Qualcomm Snapdragon 660 processor clubbed with either 3GB/4GB/6GB of RAM. It comes in two storage models – 32GB and 64GB. The one in this review is with 4GB RAM. On the camera front, Asus Zenfone Max Pro M2 sports a dual rear camera setup with 12MP and 5MP sensors. For selfies and video calls, there is a 13MP sensor on the front panel. The key highlight of the Android 8.1 Oreo-based smartphone is its massive 5,000mAh battery. 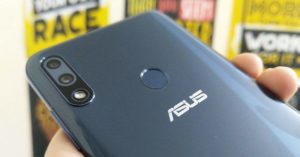 We always give some extra marks to smartphones that come with a stock Android experience. And Asus Zenfone Max Pro M2 is one of them. We love how the software had no bloatware at all and came without any customizations, which can at times make the experience laggy. The smartphone had Google’s entire suite of apps, and Facebook, Messenger and Instagram – which can’t really be counted as extra apps since most of us use it on a daily basis. Other than this, the Sound Recorder, FM Radio and Calculator apps are from Asus. So, they are really as few as they can be.

During our time with the smartphone, we did not encounter any lag in its performance. The apps launched very quickly and we had no trouble switching between them. There were no delays in the smartphone’s performance when we multitasked on it and we found the experience with the UI to be pretty smooth. However, there was one small thing that we missed in this smartphone. In a lot of smartphones that come with notches, there is an option of running the apps in full-screen mode. In Asus Zenfone Max Pro M2, some apps ran in full screen, but when we tried to use the others, the area on either side of the notch blacked out. It’s negligible, but you’ll miss it if you have used the functionality in a previous device. Furthermore, there isn’t an option of ‘removing’ the notch using software adjustments, so you would really just have to live with it. 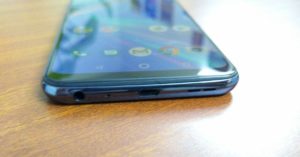 Most games ran on the device very smoothly. The lighter ones didn’t cause any trouble at all, and even the heavier ones like Asphalt 9 Legends ran reasonably well. If you play a heavy game on the device for around 30 minutes or so, it might start getting slightly warm. But this doesn’t apply to games that come without very heavy graphics. As we mentioned earlier, we watched a number of videos on YouTube during our time with the smartphone. The experience was really good. The images depicted were sharp and clear. The Zenfone Max Pro M2’s speaker can be very loud, too. Clubbed together, they make the video watching experience extremely good.

The battery life of the smartphone was definitely among the key highlights. After usage that involved browsing the internet, listening to music, playing games, watching videos and using Google Maps for straight two hours, the smartphone was still left with over 50% charge by the end of the day. In fact, we only charged it once in two days. However, fast charging is not supported on the device and it takes almost two hours to charge it fully. 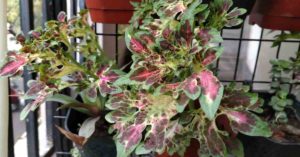 Coming to the cameras of Asus Zenfone Max Pro M2, they also did a good job. The camera app was very simple to use and comes with quick access buttons for shooting modes and beautification along with depth effect. There are a number of filters present on the app that can be used on the images too. In the December update, Asus has said that the camera app will also get AI enhancements; and EIS and Bokeh effect for the selfie camera. 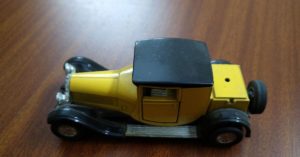 We liked the performance of the cameras. The images were detailed and the colours were accurate. The photos taken retained clarity even when they were viewed on a laptop. While the pictures taken in well-lit areas were very good, the ones taken in dimly lit areas were reasonable. Selfies taken by the front-facing snapper were decent too, but they became much better as soon as we enabled the Beautification mode. 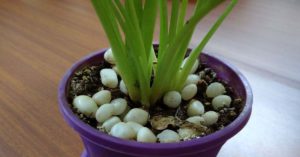 For some reason, we couldn’t run the Antutu benchmark test on this device. In Geekbench, Asus Zenfone Max Pro M2 scored 1,474 and 5,539 in the single and multi-core scores. Putting it at the top lot of the category.

At the given price, it is surely one amongst the best devices that are available. It has a beautiful design, a good display, and smooth performance. The battery is undoubtedly the best feature of Asus Zenfone Max Pro M2 and the cameras work reasonably well too. We see no reason to not recommend it.

You certainly would not regret spending your money on Asus Zenfone Max Pro M2. The smartphone does give a strong competition to the Realme handsets available in the budget range, but our vote goes to Asus Zenfone Max Pro M2 since it comes with stock Android.  With it, you can expect to get timely Android updates and security patches. So your device will stay updated at all times.