Looking to buy an affordable smartwatch? 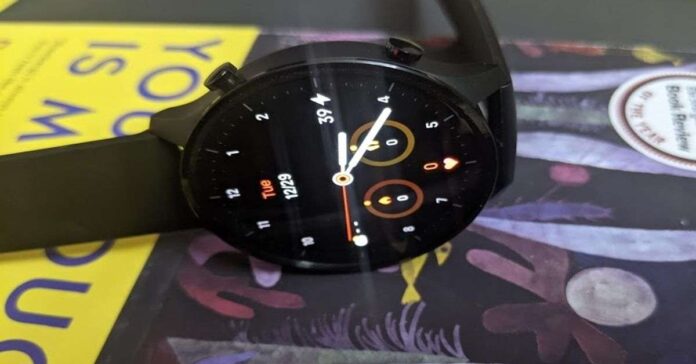 Chinese technology company Xiaomi recently launched its first ever smartwatch in India – Mi Watch Revolve – at a price of Rs 10,999. Since it’s the company’s first ever offering in India in this category, we were very excited to know if it’s as good as its specifications like AMOLED display and 420mAh battery make it seem. We spent quite some time with the smartwatch and read our Mi Watch Revolve review to know more about it:

Speaking of the design of the Mi Watch Revolve first, there were some things that we liked and some things that could have been better. The smartwatch comes with a circular display that has a black-coloured bezel running around it. The display of the watch is embedded in a metallic dial that has two buttons protruding out on the right side. While the button on the top is the Power key, the other one is for shortcuts. It is worth noticing that Xiaomi‘s offering has a 46mm case so it may look a little chunky to some. We personally liked it because it meant a bigger display for the smartwatch – something that’s always a plus because that means it puts less strain on our eyes. 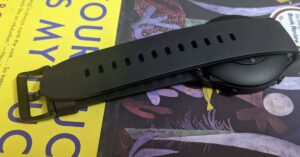 Coming to the display of Mi Watch Revolve, the smartwatch comes with a 1.39-inch AMOLED screen, and because of its big size, it has more elements on it than most other smartwatches. The screen of the watch is protected by a layer of Corning’s Gorilla Glass 3. The colours on the display of the smartwatch are bright and the icons are sharp and clear. The display is definitely one among the positive points of the device and it also responses well to touch. 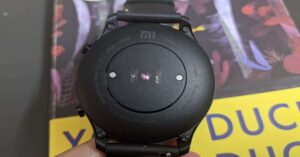 Flip the watch over and you will see the heart rate sensor of the Mi Watch Revolve on the back of its dial. The smartwatch is available in Midnight Black and Chrome Silver colour options and we got the former one for review. According to the company, the straps of the watch are 22mm wide and are made of a rubber-like material that was rather uncomfortable. This was biggest con in terms of the design, but then on the upside, you can change the straps of the smartwatch in case you encounter a problem. We particularly found it hard to sleep with the watch on because of its uncomfortable straps and because it was slightly big in size. It takes a bit of getting used to.

The Mi Watch Revolve comes with GPS and GLONASS, which basically means that you can track your footsteps even when the device is not paired to your smartphone. We think that this is a very useful feature, especially in case the battery of your smartphone runs out. The smartwatch weighs 60g when the straps are attached to it and 40g when they are not. It packs a 420mAh battery and is water resistant up to 5ATM. For connectivity, the device comes with Bluetooth 5 LE. It also has an in-built compass which is useful for outdoor activities.

Mi Watch Revolve is compatible with Android 4.4 or iOS 10 and above. Since we use an Android smartphone, we had to download the Xiaomi Wear App to pair our watch to our handset. Another downside of the watch is that while it notifies the user about new messages and incoming calls on their smartphone, it doesn’t have the ability of letting them reply to these. This is quite a thing to consider if you are thinking of buying the smartwatch. Mi Watch Revolve also comes with the Find Phone feature and using this, you can make your smartphone ring loudly. This proves to be useful in situations where you think you have lost your smartphone. 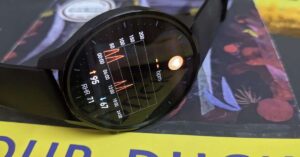 Coming to the performance of Mi Watch Revolve, it worked accurately in terms of counting our steps and the number of times we stood up. Although no smartwatch or fitness tracker can be completely accurate in terms of counting the steps or movement, Xiaomi’s offering does a fairly good job of it. We actually counted our steps every day and then compared our count to the one on the smartwatch, and we never saw too much of a difference between the two numbers, so that’s definitely a plus. However, we couldn’t do the same for distance, as during the time we were using the smartwatch, we were still avoiding the outdoors because of the ongoing pandemic. The device also recorded our BPM and stress level at all times. According to the company, the stress level is calculated on the Mi Revolve smartwatch by recording the heart rate variability and comparing it to the activity intensity data. Sleep tracking is available on the device and it gets segregated in various phases like Deep Sleep, Light Sleep and Awake. 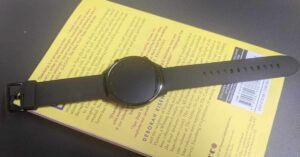 The smartwatch can also record ‘Energy Levels’ and for this, it takes into account a number of other aspects like how much the user has slept, exercised, and how much their stress level has been. There were times when it correctly guessed that we were ‘Exhausted’ or had ‘Moderate’ levels of energy. Although such aspects of a smartwatch can never be taken too seriously, this was surprisingly correct most of the times.

We were notified timely of all the activity on our smartphone that we had opted on the app to be shown on the watch. There wasn’t a noticeable lag during our time with the smartwatch.

Now, let’s talk about the battery of the smartwatch. We would have to be a little vague here and say that the duration of the battery lasts according to how many tasks you make the smartwatch do. If you have only a few notifications synced to the watch and disable the always-on display you can easily get two weeks of battery from the device. Even with a lot of notifications and always-on display enabled, the difference between the duration that the battery lasted was not considerable. So we also consider that to be a big positive.

The pros of Mi Watch Revolve outweigh its cons. We liked the display of the device although some may find it a little chunky. The straps are uncomfortable, but can be changed. The battery life is one of the best aspects of the smartwatch and is also reasonably accurate in terms of counting steps. However, the inability to reply to calls and messages might be a downer for a lot of people. Nonetheless, at this price point, Mi Watch Revolve is a very good buy.