There are hits as well as misses... 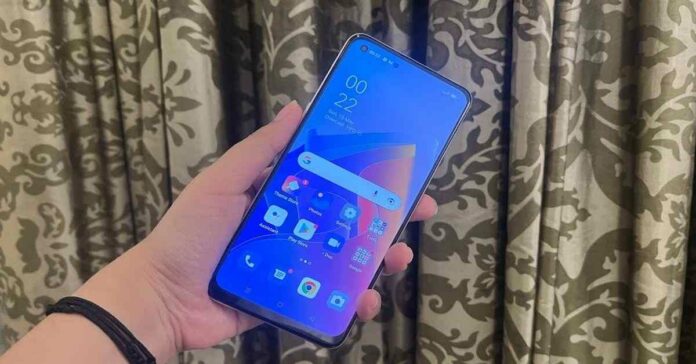 The Oppo F21 Pro is the latest smartphone by the company in the Indian smartphone market and it comes in two versions – one supporting 5G and the other a regular 4G model. The device is priced at Rs 22,999 and comes with an impressive set of specifications. Read the rest of our Oppo F21 Pro review to find out more about its pros and cons:

It’s a good thing that we are talking about the design of the Oppo F21 Pro first, because it is so very different from other phones available in the market. The smartphone sports a leatherback design on its back panel and is available in Rainbow Spectrum, Cosmic Black and Sunset Orange colours. The handset that we got for review was dressed in Orange. The colours, as well as the texture of the back panel, make the Oppo F21 Pro stand out of the crowd. The surface of the smartphone does not only look premium and unique, but it also doesn’t catch fingerprint marks or smudges unlike phones with glossy or glass finish. The back of the device also houses its rectangular camera module and the Oppo branding. 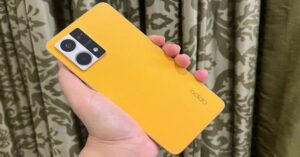 While the right edge of Oppo F21 Pro houses the Power button, the left one has the Volume Rocker keys and the SIM tray sandwiched on it. The Type-C port, speaker grill, 3.5mm headphone jack, and the microphone are placed on the bottom, and the top edge has the secondary microphone.

Flip over and you will see the front panel of the device dominated by the 6.4-inch screen outlined by thin bezels and a rather thick chin. The screen has the fingerprint scanner embedded in it and also houses a punch-hole selfie camera on the top left. The earpiece is placed discreetly on the top of the screen. In a nutshell, we would say that the design of the Oppo F21 Pro is very unique and we are really impressed by it. 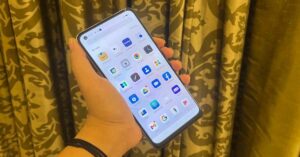 Moving on, the smartphone sports a 6.4-inch FHD+ AMOLED display that has a refresh rate of 90Hz. It also has WideVine L1 certification and can support HDR10 content. The colours showcased on the screen were vibrant and they stayed consistent at different viewing angles. Even the brightness was apt and the sunlight readability was decent. The images projected were also sharp and clear at all times and we really enjoyed watching video content on YouTube and Netflix. During our time with the device, we didn’t encounter any issues with the display of Oppo F21 Pro. It is definitely among the good aspects of the smartphone.

Before we talk about the performance of Oppo F21 Pro, let’s take a minute to discuss the rest of its specifications. The 4G model of the smartphone is powered by Snapdragon 680 SoC coupled with 8GB of LPDDR4x RAM and 128GB of built-in UFS 2,2 storage. The device houses a 4,500mAh battery and has support for SuperVOOC charging. It runs Android 12 with ColorOS baked on top and sports a triple rear camera setup with a 64MP primary sensor, a 2MP micro lens surrounded by Orbit Light, and a 2MP depth lens. The Orbit Light indicates to the user about notifications and also acts as a fill light for low-light shots. The 5G model on the other hand comes with a 6.4-inch full-HD+ AMOLED display with a 60Hz refresh rate and is powered by an octa-core Qualcomm Snapdragon 695 processor. It also comes with a triple rear camera setup but has a 2MP macro lens instead of the microsensor on the 4G model. For selfies and video calls, there is a 32MP front snapper. 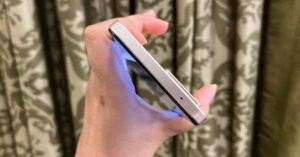 Oppo F21 Pro runs Android 12 skinned with ColorOS 12, and the software comes with a number of useful customizations like Air Gestures and an in-built Screen Translator. But then, there is bloatware too. You’ll find quite a few preloaded apps including Amazon, Snapchat, Dailyhunt, Josh, and Hot Apps which sends suggestions for other app downloads, Share Chat, Facebook, etc.

Coming to the performance, it was decent. The smartphone can perform most day-to-day functions with ease, and it took some multitasking well. Just don’t overdo it. And sometimes, apps took a while to load, which we found to be strange considering the kind of RAM and storage the device has. Gaming was decent too. Playing most of the lighter games like Alto’s Odyssey on the handset was no problem at all. It was with the high-graphic ones like Asphalt 9: Legends that the gaming performance suffered a bit. The fingerprint sensor of Oppo F21 Pro mostly worked well, but there were times when it didn’t unlock with our moist fingers. 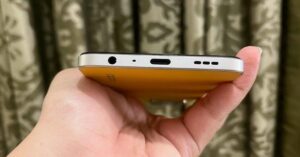 The battery of the handset was among its best features and whatever we did with our device, we easily got more than a day with the 4,500mAh cell. What makes it even better is that the battery goes from 0 to full while charging in just 90mins.

Oppo F21 Pro comes with a triple rear camera setup, as we had mentioned earlier. The primary 64MP lens gave us some good shots during the day and in well-lit settings. There was sharpness in the images, but there were times when the colours appeared to be a little too saturated. If you like your photos to be very vibrant, you may not mind it. You can also try clicking pictures with the ExtraHD mode enabled, which would basically scale the image to 108MP resolution, according to the company. 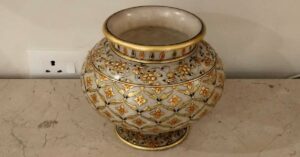 With the microlens, you can zoom in to the smallest of objects around you and click some amazing shots of them, provided you can keep your hands stable. Using the ring light does make the picture better, but not phenomenally. There is also a monochrome sensor on the device, in case you are fond of B&W pictures.

But all of these weren’t as big an issue as low-light photography was. With some amount of light, the images turned out decent. They had some details and sharpness, but the colours weren’t that accurate. But with no light, the quality of the image really drops and even the Night Mode doesn’t solve the problem.

The selfie camera, on the other hand, did not disappoint us. We got some really nice-looking self-shots with the colours and sharpness just right.

The design, display and battery of the Oppo F21 Pro are definitely its pros, but the performance and cameras could have been better. We are hoping in the next software update they become better. It can be the right buy for you if you want a very unique looking smartphone and are not that heavy on usage. Starting at 22,999 the Oppo F21 Pro seems to be a very decent buy in the mid-segment, especially for people who want to flaunt their smartphones.

- Advertisment -
The Oppo F21 Pro is the latest smartphone by the company in the Indian smartphone market and it comes in two versions - one supporting 5G and the other a regular 4G model. The device is priced at Rs 22,999 and comes with an...Oppo F21 Pro review: Full marks for style, but can the performance catch up?