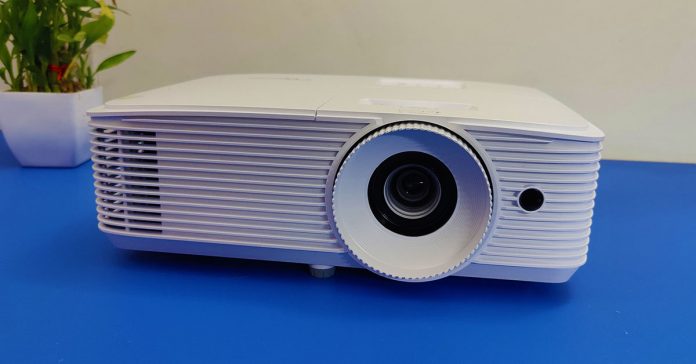 The demand for good televisions and projectors in India has surged, as more indoor entertainment options were needed during the last year and a half. People are stuck indoors thanks to the pandemic and many looked to buy bigger, better screens to watch TV channels, Netflix or just play console games. Optoma is a brand that has got some good to great projectors under its belt, serving the needs of entertainment seekers. We got our hands on the latest Optoma HD30HDR projector to understand how well the latest 4K projector is. This is our Optoma HD30HDR projector review and what we feel about it.

When it comes to the design of the Optoma HD30HDR projector, it looks like the rest of the pack. With a large lens and lamp upfront, all the relevant keys can be found on the top and a couple of ports located on the back panel. These include 2 HDMI, 1 USB and 1 audio port. Dressed in sparkling white the front also has the IR receiver to be managed by its remote. There is a rotating zoom dial on top as well, here you can find the Optoma branding too. 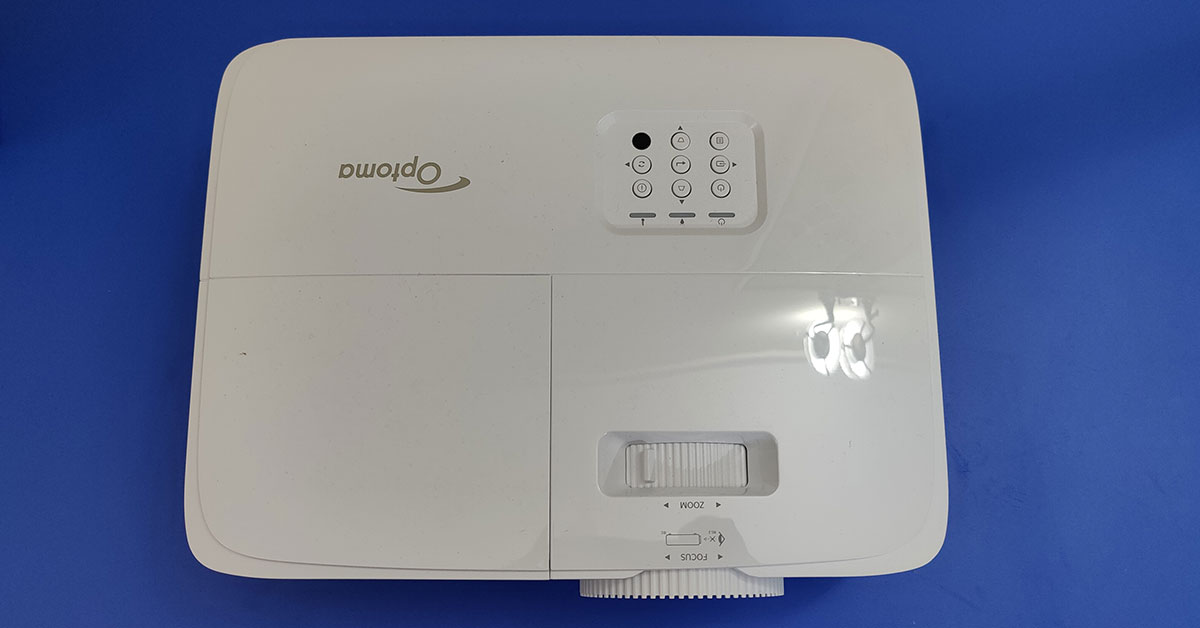 Beneath the Optoma HD30HDR projector, users also get a corkscrew stand. This helps in case you want to raise the screen level when the projector is placed on a hard surface that is lower than the height of the white screen or wall. This is paired with vertical keystone correction, which helps align the screen. The projector can be ceiling mounted as well; however, the mount is not part of the package.

With the Optoma HD30HDR projector users also get a fully functional IR remote that works well. We tested from as far as 15 feet and it worked like a charm. Another good thing about the remote is that it is LED-backlit. In case you are in a dark or lowly-lit room, you will not find it to be a problem to use the remote. 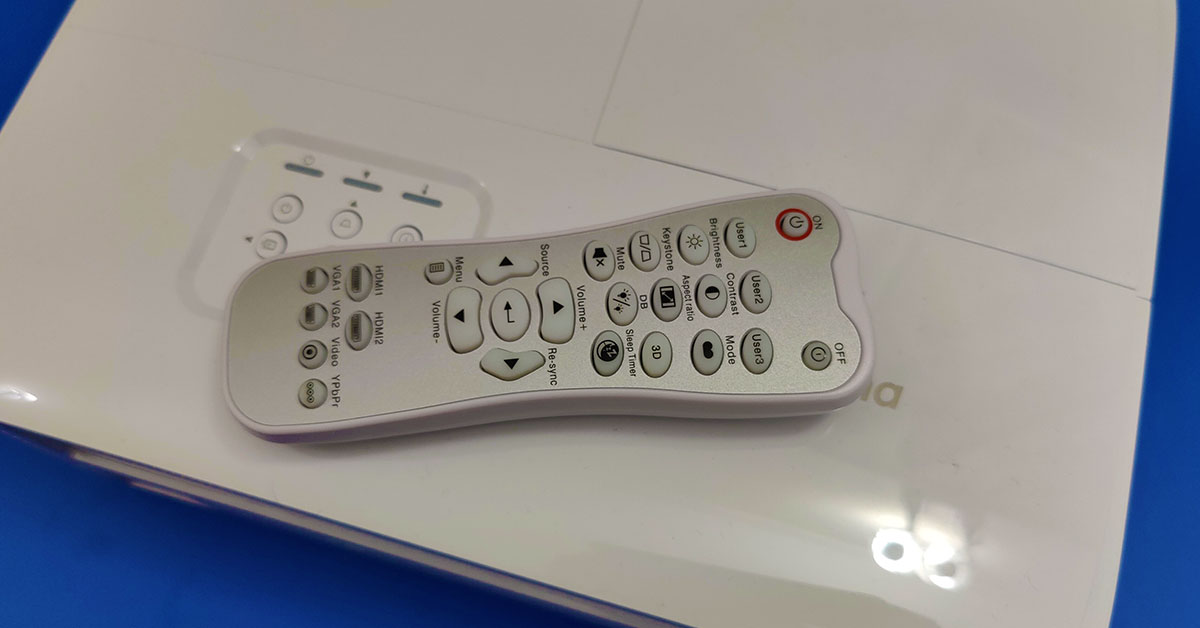 When it comes to the performance of the Optoma HD30HDR projector, we were super impressed. The company has made the projector with almost perfection. It supports 4K resolution and we connected it with a laptop as well as a set-top box. We played a lot of PC games on it including PUBG and Mortal Kombat X and we loved every bit of it. It was even better at gaming because the company has specially tuned it for games. The input lag is just 16ms and 120Hz refresh rate is supported to get better FPS from compliant systems. The same is the case with the set-top box. The Olympics looked exceptional on it. The colours are accurate and bright. The text is legible and there is no ghosting at all. 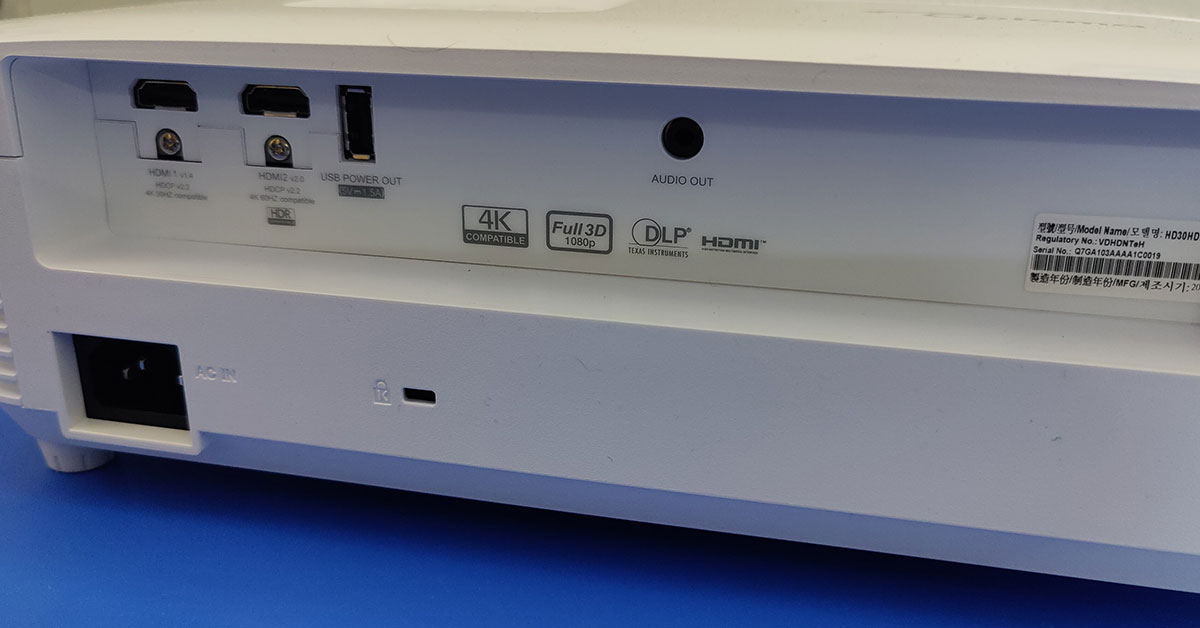 We projected the screen on an off-white wall and the colours were good. The blacks are deep, and the hues did pop out when you play 4K videos. On the flip side, there are just 2 HDMI ports, which means only two external devices can be connected. So if you have an STB and Gaming console connected to the Optoma HD30HDR projector, then you cannot connect another device to it, unless you remove one. There is a 3W speaker in the projector, which is somewhat fine if you are sitting near it and watching TV. However, since you will be using it in large rooms, you do need external speakers connected to it via the 3.5mm audio port for the best audio experience.

The Optoma HD30HDR projector can display a screen size of 120-inches from a range of 12 feet. Which we found to be the sweet spot. Though it does support up to 300-inches, we found the imagery to be the best between 100 to 150-inches. Also, unlike many other projectors, the Optoma HD30HDR projector is not noisy or does not overheat. The lamp supports 3,800ANSI and up to 15,000 hours of life in dynamic mode, which means it will last for a decade and a half. Moreover, thanks to the high brightness you can watch it with the room lights on, the projection will not wash away.

At just over Rs 80,000 the Optoma HD30HDR projector is a great projector to own. We loved every bit of it and if you are in the market looking for a well-performing projector that will last you for long, then your search ends here. We just wish the company would have added more ports within.

The sound could have been better

- Advertisment -
Optoma HD30HDR projector review: What a wonderful viewThe demand for good televisions and projectors in India has surged, as more indoor entertainment options were needed during the last year and a half. People are stuck indoors thanks to the pandemic and many looked to buy bigger, better screens to watch TV...