Samsung Galaxy Tab S7: As good as it looks on paper? 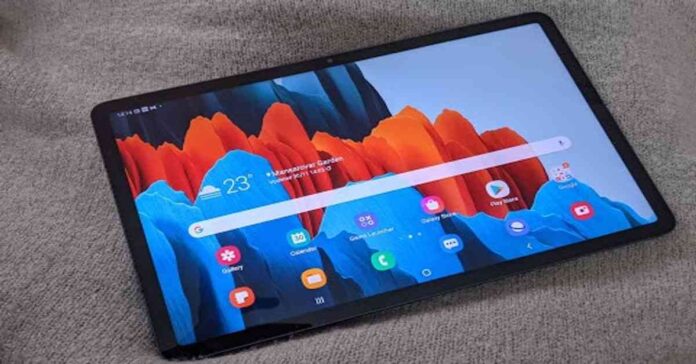 Recently, Samsung Galaxy Tab S7 was launched in India with a number of impressive features including an 11-inch screen, support for Samsung DeX and an 8,000mAh battery. The device is also powered by the Snapdragon 865+, so the performance already seems very promising. We spent a few days with the device to see if it actually lives up to the expectation that its specifications. Here’s our Samsung Galaxy Tab S7 review, that’ll tell you all that you need to know in detail:

In terms of the design, Samsung Galaxy Tab S7 looks a lot like its predecessor. However, we have to give Samsung the credit for adding some very nuance changes in the look and feel of the tablet. The front panel of the device is dominated by its 11-inch WQXGA TFT display with borders outlining the screen. While they are broad, they aren’t as thick as the ones we get to see on most other tablets. The selfie camera has been placed in a way that one has to hold the device in landscape mode to use it appropriately, but that makes sense since most people would have a preference of using it like that while being on a video call. But then, we should point out that you should avoid using Instagram for video calling on the tablet, as that doesn’t work the best in landscape mode. Just go for an option like Zoom instead. 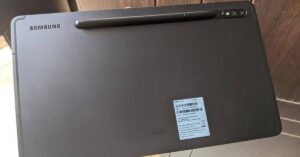 Flip over, and you will see the matte back panel of the device with Samsung and AKG branding. Both are in landscape mode too. Besides this, there is a camera module and a glossy portion below it to signify that that is where the S Pen is supposed to be kept. The top as well as the bottom edge of the tablet has speaker grilles. The top additionally only has a secondary microphone and the bottom has a Type-C port. The left edge of the device has ports to connect it to the keyboard while the right one has the power and volume rocker keys, and the SIM tray.

Coming to the display of the tablet, as we mentioned earlier, it comes with an 11-inch WQXGA TFT display that comes with 16:10 aspect ratio and has a refresh rate of 120Hz. It also has support for HDR10+. We should mention that the display of Samsung Galaxy Tab S7 is simply brilliant and it was an absolute delight to watch content from YouTube and Netflix on it. Our binge watching tendency went so much higher than usual thanks to the tablet’s amazing display. The brightness is just apt, the colours are very rich and vibrant and the images projected are sharp and clear. Another aspect of the device that actually enhanced our viewing experience was the speakers. The excellent sound quality was truly the icing on cake and no matter how loud the volume was, the sound never lost its clarity. 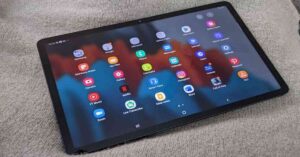 To put it in a nutshell, we would say that we are truly impressed by the design and the display of Samsung Galaxy Tab S7 and even though we haven’t spoken about the performance yet, it’s absolutely safe to say that if you are looking for a tablet for media consumption primarily, you should know that this is the right choice. But do read on to know its other pros and cons.

Before we begin speaking about the performance, let’s take a minute to talk about the rest of the specifications of Samsung Galaxy Tab S7. The tablet runs Android 10 and is powered by an octa-core Qualcomm Snapdragon 865+ processor. It comes with 6GB of RAM and 128GB of internal storage. They device can also hold microSD cards of up to 1TB. For imaging duties, there is a dual rear camera setup that has a 13MP primary sensor and a 5MP secondary ultra-wide-angle lens. The tablet houses an 8MP camera on the front panel for selfies and video calls. For connectivity, Samsung Galaxy Tab S7 has 4G (optional), Wi-Fi, Bluetooth v5.0, GPS, and Type-C port. The device also supports Wireless DeX and houses an 8,000mAh battery. 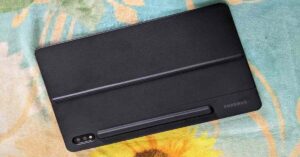 With Qualcomm‘s Snapdragon 865+ processor and 6GB of RAM, we didn’t expect any problem with the performance of the tablet, and we turned out to be correct. It was a cakewalk for the tablet to handle even the most heavy-duty tasks that we tried to perform on it. Multitasking was not a problem either, as expected. As we said earlier, we used the tablet a lot for watching content on YouTube and Netflix. While we have already told you that how amazing the viewing experience was, we should also point out that no matter how many number of hours we spent watching movies and TV shows on it, the tablet did not warm up even once. We even played some graphic heavy games like Asphalt 9: Legends and Call of Duty on the device, and it handled them all like a breeze. 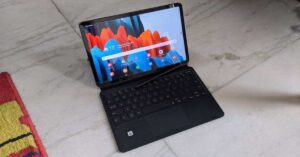 The 8,000mAh battery of Samsung Galaxy S7 is another positive point of the tablet. With heavy usage involving watching movies, using the device for checking e-mails, writing articles, and playing music on apps like Spotify, the battery easily lasts for more than six hours. If your usage is moderate, it can even last up to 8-9 hours. In our opinion, the battery life of the gadget is long lasting. If you use the 15W charger that Samsung ships with the tablet, it would take around three hours for it to be completely charged.

We used Samsung’s DeX Mode on the device too. Firstly, we should add that if you want to use DeX on the tablet, you should definitely first attach the keyboard to the device as the experience immediately becomes a lot better with it. We had the apps of Google Drive and Sheets to use them, and we faced no problem with the device while doing so. Even when we tried to use some services on desktop, they worked well. While there is still some work needed for the experience to become as seamless as it is on a laptop, we can easily term it as decent.

Coming to the keyboard of the device, the keys on it are well spaced out and we faced no discomfort while using it. It attaches easily to the tablet and there was no lag that we faced. Even the track-pad and the buttons it worked perfectly well at all times. But, remember the keyboard is not part of the box and one would need to shell a little extra and buy it. 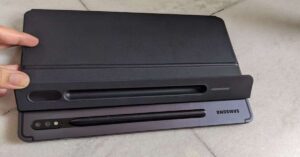 We wish we could speak in detail about the S Pen, but then, we didn’t use it that much. But whatever little doodling we managed to do with it, it turned out just fine. It is good for doodlers and people who like to scribble, us we still love the finger to touch experience on the tablet.

Last but not the least, let’s talk about the cameras of the device. We’ll be honest. They probably aren’t the best ones to use if you are fond of photography. Because the images do have some noise regardless of the lighting conditions. It would be a much better idea to restrict their usage to just Zoom calls and rely on your smartphone for photography.

Available at a starting price of Rs, 55,999, Samsung Galaxy Tab S7 does excel in most categories. It’s absolutely great to watch movies and shows on it thanks to the great display and speakers. The battery lasts really long and the performance of the device is also very smooth. So, there’s no reason for us to not recommend it. Samsung DeX is decent, but it still doesn’t replace the seamless laptop experience. The cameras can definitely be better too. But then, both of these are very manageable issues and shouldn’t spoil your experience.

- Advertisment -
Samsung Galaxy Tab S7 review: Great for binge-watchersRecently, Samsung Galaxy Tab S7 was launched in India with a number of impressive features including an 11-inch screen, support for Samsung DeX and an 8,000mAh battery. The device is also powered by the Snapdragon 865+, so the performance already seems very promising. We...