This week saw a big yet affordable upgrade come to HMD Global’s Nokia lineup. The company launched its Nokia 3.1 Plus smartphone in India, which is the successor to Nokia 3.1 that was unveiled in July. To recall, although Nokia 3.1 was a value for money device, it did lack some key features. For instance, the smartphone did not come with a fingerprint sensor.

But we don’t have a reason to complain anymore, because Nokia 3.1 Plus does address the complaints users had with its predecessor. The smartphone features a bigger screen than Nokia 3.1, comes with a fingerprint scanner on its back panel and even has a bumped up MediaTek HelioP22 processor and a 3,500mAh battery. But that’s still not the best thing that the company has added to the new smartphone. Nokia 3.1 Plus sports a dual rear camera that enables it offer portrait mode effects. And like all other Nokia smartphones that have been launched recently, the mobile phone comes under the Android One program, which gives it an edge over others because it will get timely Android updates for two years and security patches for three years.

The smartphone costs Rs 11,499, and at this price it competes with the likes of Moto G6 (review), Xiaomi Redmi Note 5 Pro and Asus Zenfone Max Pro M1 (review). We spent some time with the Nokia 3.1 Plus and here are our first impressions of the device. 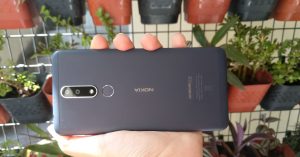 We really liked the design of Nokia 3.1 Plus. The smartphone has a sturdy built and it feels solid to hold. And it was certainly refreshing to use a smartphone that has matte finish as it means no fingerprint smudges. The back panel of Nokia 3.1 Plus houses the dual rear cameras, LED flash and the fingerprint scanner. The volume rocker and power buttons are sandwiched on the right edge and the SIM card and microSD card slots are on the left edge. The top and bottom edges house the 3.5mm jack, USB port and speaker grilles. 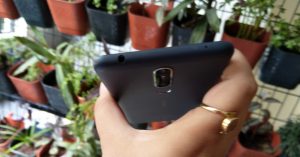 Flip the phone over and you’ll see the 6-inch screen of the smartphone with Nokia branding, earpiece and selfie camera on top. Overall, we really liked the design of Nokia 3.1 Plus. It definitely is one among the better looking phones in the budget segment and its matte finish makes it stand out. 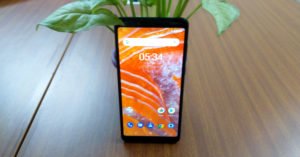 Nokia 3.1 Plus smartphone sports a 6-inch HD+ IPS display that has an aspect ratio of 18:9. One thing that we found to be a differentiator is the fact that Nokia 3.1 Plus does not sport a notch on its display, something that is not very common anymore. Coming back to the display, it showcased bright and vibrant colours and had good viewing angles. The colour reproduction is accurate and the images projected are sharp and clear. In our limited time with the phone, the only downside to the display that we observed was its sunlight readability. That certainly could have been better. But you’ll have to wait for our review till we give you our complete opinion on it. 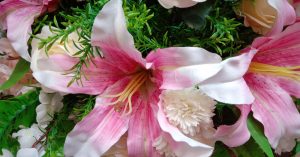 Nokia 3.1 Plus sports dual rear cameras with a 13MP sensor that comes with an f2.0 aperture and a 5MP sensor that has an f2.4 aperture. The front panel of the smartphone houses an 8MP camera with f2.2 aperture. Bokeh feature is present on the dual rear cameras as well as on the selfie camera of Nokia 3.1 Plus. It is worth noticing that the dual rear cameras have the Live Bokeh mode, which basically enable the user to adjust the depth in Bokeh mode before he clicks a picture. However, the same cannot be done while clicking selfies. Time-lapse and slow motion videos can also be recorded using Nokia 3.1 Plus. We took a few shots using the smartphone and we were impressed by the colour reproduction and the details that the cameras captured. However, our opinion as of now is limited to shots taken in brightly lit areas. You would have to wait for our full review to know about the low-light shots. One aspect of the smartphone that truly disappointed us was the selfie camera. If you are selfie fan, you may not be too happy with the results you’ll get from Nokia 3.1 Plus’ front facing snapper. We tried to take a number of shots, but the selfies we took were just not up to the mark as compared to other smartphones in this price segment. But then, we will use it for a little longer before we jump to any conclusions about it.

In the limited time that we got with the Nokia 3.1 Plus, we loved its design and even found our experience with the display to be good. The cameras did leave us with mixed feelings, but as we said, it would be too soon for us to jump to any conclusion. The smartphone does have its own set of positive points and because it comes under the Android One program, it may be one among the first budget phones in the country to get an Android Pie update. Till now, Nokia 3.1 Plus seems to be a promising budget smartphone, but we will use it for a few more days and come back to talk about its performance and battery life.

Avani Baggahttp://www.gadgetbridge.com
Avani has an immense love for reading, travelling and food, but not necessarily in the same order. Avani almost started pursuing law, but life had other (better) plans for her and she chose to be a writer instead (luckily!) She previously covered technology at Times Internet and wrote about smartphones, mobile apps and tech startups. When she’s not writing, you’ll be able to find her in book stores or catching up on her social life.
Facebook
Twitter
WhatsApp
Linkedin
ReddIt
Email
Previous article
Comparison: Google Pixel 3 XL vs Apple iPhone XS Max vs Samsung Galaxy Note 9
Next article
Comparison: Nokia 8110 4G vs JioPhone 2