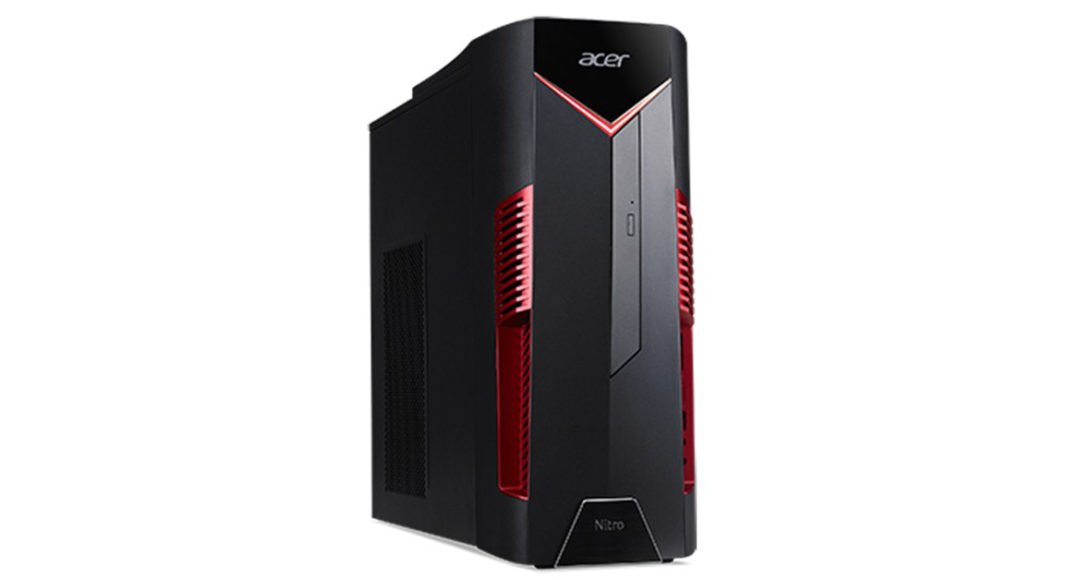 Taiwanese electronics maker Acer launched a slew of devices at its [email protected] global conference yesterday. Among these were its gaming desktops, Nitro 50, Orion 3000 and Orion 5000 series.

Acer introduced its Nitro 50 series of gaming desktops along with Nitro VG0 and RG0 gaming monitors at the event that was held in New York yesterday. Speaking of Acer’s Nitro 50 series, the desktops are powered by up to 8th-generation Intel Core i7 processors coupled with Nvidia’s GeForce GTX 1070 graphics cards. They come with up to 3TB HDD and 512GB SSD.

What’s exciting about them is the fact that they can simultaneously support 4 displays at once and offers 4K resolution visuals. They also support Qi-enabled charging and come with a dedicated handy wireless charging deck for it.  They come with armour inspired housing and sport front facing LED lighting that emit red glow. Acer’s Nitro 50 Series also supports Realtek Dragon LAN which optimizes network speed.

Speaking of Acer Nitro VG0 Series, it comes with 27 inch, 23.8 inch and 21.5-inch display panels with three options in terms of resolution — 4K ultra-HD, WQHD, or Full-HD. On the other hand, Acer Nitro RG0 Series comes in 27-inch and 23.8-inch models and the company is touting it for its 0.27-inch thin profile.

Acer’s Nitro RG0 series’ displays come with 1920×1080 at 75Hz resolution and IPS panels that can provide view of up to 178 degrees horizontally and vertically. The monitors meet 72 percent of NTDC standard and can tilt from -5 to 20 degrees. They can deliver 250 cd/m2 brightness and come with a VESA mount which enables them to be hung in the wall.

Speaking of Acer’s Predator Orion 5000 series, the gaming desktops feature up to 8th Gen Intel Core i7+ 8700K processors. The processors are further coupled with the latest Intel Z370 SoC, up to 2-way Nvidia GeForce GTX 1080 Ti GPUs and up to 32GB of memory. They come with IceTunnel 2.0 airflow management design and a front mesh panel with dust filters. They also have additional features for gaming like cradles for audio headsets, and a carry-handle for to make them portable.

Devices from Acer Predator Orion 3000 Series are powered by up to 8th-generation Intel Core i7+ processors coupled with GeForce GTX 1080 graphics cards from Nvidia. While a lot of specifications are similar to Orion 5000, Orion 3000 series support VR and 4K gameplay.

Avani Baggahttp://www.gadgetbridge.com
Avani has an immense love for reading, travelling and food, but not necessarily in the same order. Avani almost started pursuing law, but life had other (better) plans for her and she chose to be a writer instead (luckily!) She previously covered technology at Times Internet and wrote about smartphones, mobile apps and tech startups. When she’s not writing, you’ll be able to find her in book stores or catching up on her social life.
Facebook
Twitter
WhatsApp
Linkedin
ReddIt
Email
Previous articleXiaomi to launch a selfie focussed smartphone in India on June 7
Next articleApple is giving back Rs 3,900 to its customers over iPhone’s battery fiasco