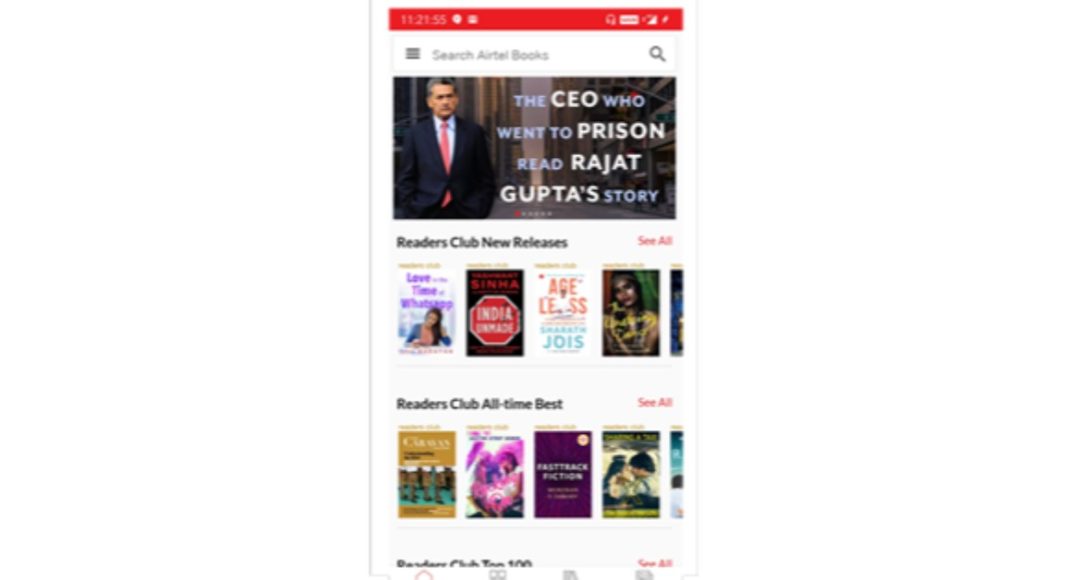 After launching digital content platforms like Wynk Music and Airtel TV, Bharti Airtel Ltd will soon be unveiling a service for readers. Dubbed Airtel Books, the service will come with a collection of e-books for smartphone users. We should add here that with the launch, Airtel aims to upgrade its subscribers to a higher tariff plans and retain then on its network.

The digital content strategies of telecom companies are now becoming increasingly crucial for them because cheap data tariffs are no longer a way to attract consumers, primarily because all the players are offering data at dirt cheap prices. As of December 2018, Airtel had a total of 284.2 million playing subscribers on its network. Its music streaming app Wynk has 120 million users, which Airtel TV enjoys a user base of 80 million.

Speaking about the upcoming book service, Sameer Batra, CEO, content and apps, Bharti Airtel said, “In the past, we made good progress on the entertainment side and we were studying many categories apart from music and video. We realized e-books is a niche and strong category, especially as Airtel has high-quality customers on its network. Also, it’s an uncluttered space.”

While Reliance Jio‘s apps does include JioMags, it focuses on magazines and not books.

The upcoming service will be available to both Airtel and non-Airtel customers and those who subscribe to it will be able to access it on Android as well as on iOS. Airtel Books will initially offer more than 70,000 titles from leading Indian as well as international authors across various genres like crime, romance, fitness, diet, spirituality, business, history and politics, and classics. Furthermore, although at the beginning Airtel Books will have books in English and Hindi, it will soon diversify and include titles from other languages as well.

It is worth mentioning that in December 2017, the company had acquired a strategic equity stake in Juggernaut Books via its wholly owned subsidiary Nettle Infrastructure Investments Ltd. Juggernaut Books was co-founded two years ago by Durga Raghunath and Chiki Sarkar and the company has Nandan Nilekani as its investor. The telco will be relying on Juggernaut to curate content for its upcoming application.

Airtel has also said that it will give all its users a complimentary trial for 30 days. The Readers Club subscription will cost Rs 129 for six months and Rs 199 for a year. Other than this, there will be an option to pay separately for a single book too.

Batra also added, “As e-books is a niche category, we believe the propensity to pay will be higher compared to other kinds of content. We also plan to offer special benefits for Airtel subscribers and are exploring how to bundle the e-books offering with our rewards programme Airtel Thanks. If you are a high-paying Airtel subscriber, we may give some complimentary benefits also.”

Avani Baggahttp://www.gadgetbridge.com
Avani has an immense love for reading, travelling and food, but not necessarily in the same order. Avani almost started pursuing law, but life had other (better) plans for her and she chose to be a writer instead (luckily!) She previously covered technology at Times Internet and wrote about smartphones, mobile apps and tech startups. When she’s not writing, you’ll be able to find her in book stores or catching up on her social life.
Facebook
Twitter
WhatsApp
Linkedin
ReddIt
Email
Previous articleGoogle Pixel’s Call Screen feature to come to Nokia and Motorola smartphones: Report
Next articlePopular email app Spark makes its way to Android