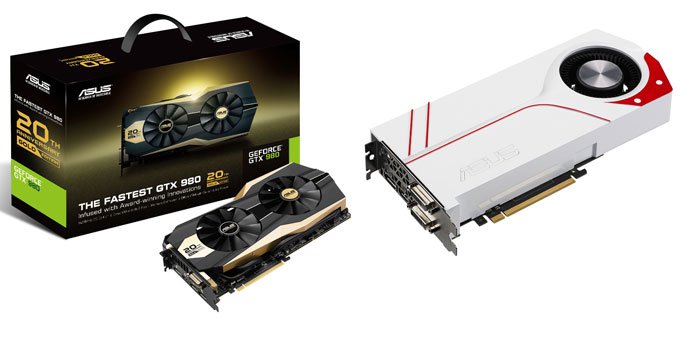 Asus is a brand well known for computer products such as motherboards and graphic cards. They just launched a special anniversary edition of graphic cards that every gamer would want to own. In association with NVIDIA, they introduced GTX 980 GPU that houses in a beautiful golden enclosure. This graphic card has clock speed of 1.43 GHz.

The other graphic card that is part of the celebrations is the NVIDIA Turbo GTX 970. This one comes in a suave white colour packaging and we for one love the look. This is what every gamer wants to showcase in his computer cabinet and with it gain some bragging rights.

Asus has a history of innovating and they were kind enough to send us what they have done in the past decade and a half.

Sulabh Purihttp://www.gadgetbridge.com
Sulabh Puri is the Editor In Chief of GadgetBridge.com. A content specialist, he started his career young and it has been a rewarding 15 years for him. Before heading Gadget Bridge, he was the Editor of Times of India (TOI) Technology and GadgetsNow.com. He has also led TOI’s international edit arm as the Editorial Head of Business Insider India and Tech Radar India. He has also worked with various media houses such as the India Today Group and Cybermedia. He loves everything ‘gadgety’ and enjoys tinkering with new tech toys and automobiles. A graduate in commerce from Delhi University, he is also an adept graphic designer. When he is not working, he can be found in the kitchen, cooking mouth-watering chocolate cakes and croissants.
Facebook
Twitter
WhatsApp
Linkedin
ReddIt
Email
Next articleLenovo launches its A7000 smartphone in India