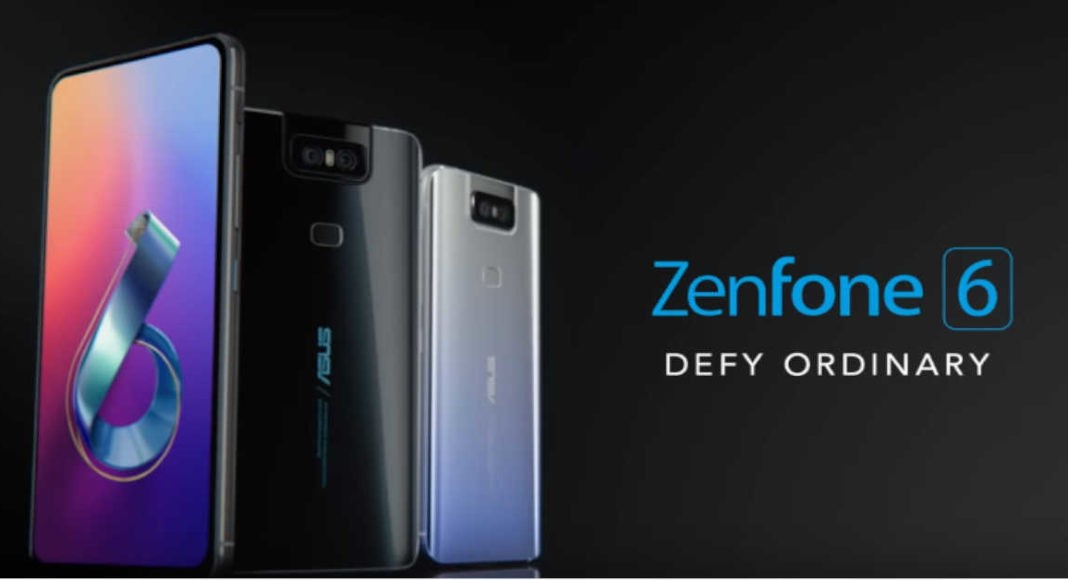 Asus Zenfone 6 has now been launched globally at an event in Spain. The smartphone is the successor of the Taiwanese technology company’s 2018 flagship handset Zenfone 5Z. The newly-launched device is the first by the company to come with a rotating camera, which also means that the handset has an all display design. The smartphone also has a dual camera setup on its back panel, which flips to become a front facing snapper. We should mention that earlier this year, Samsung Galaxy A80 was also launched with rotating camera setup. However, compared to Samsung Galaxy A80, the implementation of a rotating camera on Asus Zenfone 6 is relatively simple.

The motorised dual-camera setup rotates vertically so that it faces the user of the handset to click a selfie. Asus has also said that it has added fall detection to the camera module so that it automatically retracts the camera to its base position when the handset detects a fall-like movement. Here are the price details and specifications of the Asus Zenfone 6 that you should know about:

Asus Zenfone 6 is available in three storage variants. The base model of the smartphone with 6GB RAM/64GB storage costs EUR 499, while the 6GB RAM/128GB storage model is priced at EUR 559. The top-end variant with 8GB RAM and 256GB of storage can be picked up at EUR 599. The handset can be bought from Asus eShop and its shipping will begin starting May 25. Asus Zenfone 6 is available in two colour – Midnight Black and Twilight Silver.

Asus ZenFone 6 runs Android 9.0 Pie skinned with the company’s own Zen UI 6 and it will be getting upgrades to Android Q and Android R. The smartphone sports a 6.4-inch full-HD+ IPS screen that has an aspect ratio of 19.5:9, a screen-to-body ratio of 92%, 600 nits peak brightness and a colour gamut of 100 DCI-P3. Powered by an octa-core Qualcomm Snapdragon 855 SoC, the device comes with up to 8GB of RAM and Adreno 640 GPU. It has 256GB of internal storage and can hold a microSD card of up to 2TB.

On the camera front, Asus Zenfone 6 comes with a dual rear camera setup that comprises of a 48MP primary sensor with an f/1.79 aperture coupled with a 13MP ultra-wide-angle sensor.

The smartphone comes with a massive 5,000mAh battery that has support for Quick Charge 4.0. the device has dual speakers onboard and dual smart amplifiers onboard. The connectivity options of the smartphone include USB Type-C, NFC, Wi-Fi, Bluetooth 5.0, and GPS.

Avani Baggahttp://www.gadgetbridge.com
Avani has an immense love for reading, travelling and food, but not necessarily in the same order. Avani almost started pursuing law, but life had other (better) plans for her and she chose to be a writer instead (luckily!) She previously covered technology at Times Internet and wrote about smartphones, mobile apps and tech startups. When she’s not writing, you’ll be able to find her in book stores or catching up on her social life.
Facebook
Twitter
WhatsApp
Linkedin
ReddIt
Email
Previous article
Sony Xperia Ace with front-firing speakers and a Snapdragon CPU launched: Price and details
Next article
Valve’s Steam Link application has finally made its way to Apple’s App Store