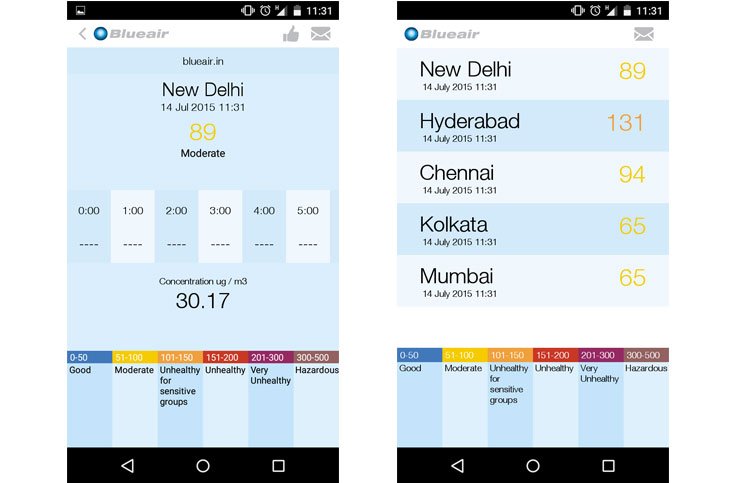 Blueair is one of the leading producers of indoor air purifiers. They have released the Android version of its Air Pollution Warning app in India. This app sends out an early warning signal to Indian Android smartphone users and given them the opportunity to take precautions against heavily polluted air in their area.

So what does the Blueair Air Quality app do?

This app gathers real time info on the air quality levels in cities like Delhi, Mumbai, Hyderabad, Chennai and Kolkata. Using a host of monitoring systems laid down in each of these cities the results are shown on the Android smartphone screen of the user. One can check the air quality in their area and make plans or take precautions accordingly.

Mr. Vijay Kannan, Head of Blueair India said “Noting that 90 per cent of smartphones sold in India are powered by Google’s Android system, the Android App release comes at a time when millions of people are being diagnosed with breathing and skin health issues related to pollution from cars, trucks and buses, industrial production and construction. A major problem has been people’s inability to detect what is in the air they are breathing, but the Blueair air quality Android app helps address that by giving people the chance to finally monitor how serious their air quality is in real time and do something about it to protect their health and well-being.”

The Blueair Air Android App is available for free on Google Play app store. This app is very easy to install and use, the Blueair AQ Monitor rates urban air quality on a scale from zero (good) to 500 (hazardous) and is updated regularly throughout the day.

This Air Pollution Warning app is surely going to help the people in these Indian cities. We hope more Indian cities would be added soon to the list.

Sahiba Sethhttp://www.gadgetbridge.com
Sahiba Seth is a student, pursuing English (Hon) from Delhi University. She has been a trainer of HYTSE (Helping Youngsters To Speak English) in her school. She loves to interact with people and she is crazy about gadgets like mobiles and cameras. She likes to read and search about gadgets, and their features. She loves to stay in tune with the happenings of Hollywood and Bollywood. Also, she is passionate about reading novels and creative arts.
Facebook
Twitter
WhatsApp
Linkedin
ReddIt
Email
Previous articleiBall Slide Cuddle A4 Android KitKat tablet launched at Rs 9,699
Next articleIntex to launch Aqua Fish Smartphone soon and IRIST smartwatch with 3G