It comes with a fingerprint scanner for added security. 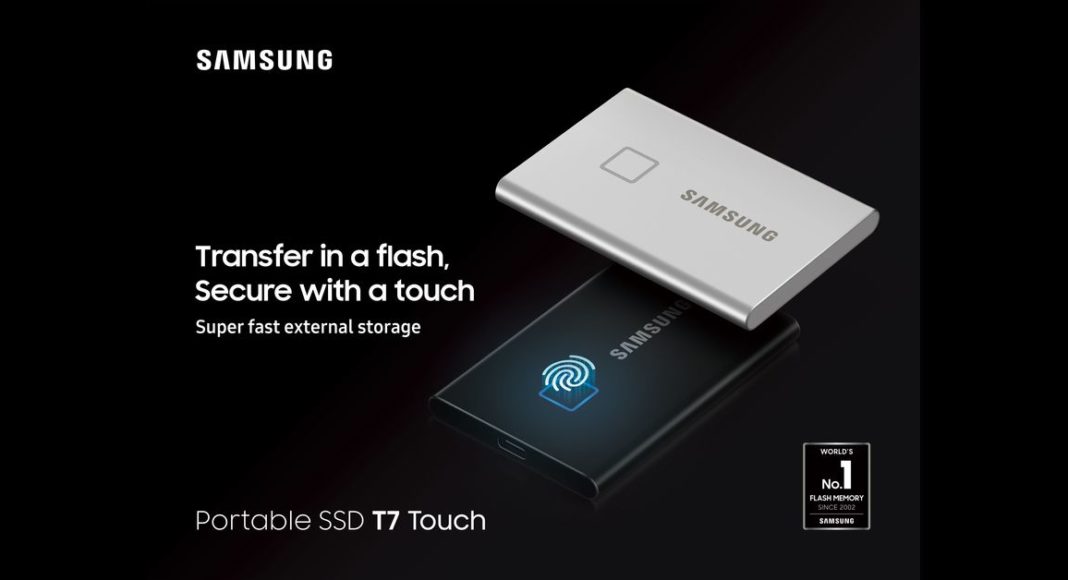 South Korean technology giant Samsung has made a number of exciting announcements at the ongoing CES 2020 tech show. The latest news from the company is that it has announced the release of its external storage device – the Portable Solid State Drive (SSD) T7 Touch. Samsung has said that with the SSD, it has seeked to combine a compact design with “fastest transfer speeds” that are currently available on the USB 3.2 Gen 2 standard.

The company has also said that the new device has enhanced data protection and as an additional hardware security measure, it has a built-in fingerprint sensor.

Speaking on the launch, Akash Saxenaa, Senior Director, Enterprise Sales, Samsung India, said, “Consumers who are constantly on the go between work, play and passion projects want to be able to securely carry their content with them. Now their data is secure thanks to the fingerprint recognition functionality incorporated into the product, which delivers industry-leading transfer speeds in a compact form factor.”

According to Samsung, the SSD is meant for professional as well as casual users and the company has also said that the T7 Touch has enough capacity to store large numbers of pictures, games or 4K/8K videos in a secure manner. The company has further added that the SSD can do so on a PC, tablet, smartphone or a gaming console.

The newly-launched SSD by Samsung is said to come with a significant speed upgrade as compared to its predecessors. Samsung T7 Touch has a read speed of 1,050MB/s and a write speed of 1,000MB/s, and this makes it approximately twice as fast as its predecessor, the T5. In addition to this, it is also 9.5 times faster than external HDDs, Samsung added. The new SSD is also said to reach its maximum speed when used with the NVMe interface.

As we mentioned earlier, Samsung has also added a built-in fingerprint scanner to the SSD to make it more secure. Other than this, it also has password protection and AES 256-bit hardware encryption. The SSD also has a ‘Motion LED’ that enables the user “to determine the status of the device simply with a single glance.”

Samsung T7 Touch comes with a three-year limited warranty and will be available in over 30 countries across the globe starting this month.

Samsung T7 Touch is available in Black and Silver colours and comes in 500GB, 1TB and 2TB options. While the base model costs Rs 11,999, the 1TB option is priced at Rs 18,999, the most high-end model can be picked up at Rs 36,999. There is also a variant without fingerprint scanner that is expected to be launched in Q2 2020.

Avani Baggahttp://www.gadgetbridge.com
Avani has an immense love for reading, travelling and food, but not necessarily in the same order. Avani almost started pursuing law, but life had other (better) plans for her and she chose to be a writer instead (luckily!) She previously covered technology at Times Internet and wrote about smartphones, mobile apps and tech startups. When she’s not writing, you’ll be able to find her in book stores or catching up on her social life.
Facebook
Twitter
WhatsApp
Linkedin
ReddIt
Email
Previous article
CES 2020: Google Assistant gets the ability to read out articles in 42 languages
Next article
CES 2020: Panasonic unveils the world’s first VR glasses that come with HDR support