Which one can be considered the best premium smartphone? Let's find out in this comparison. 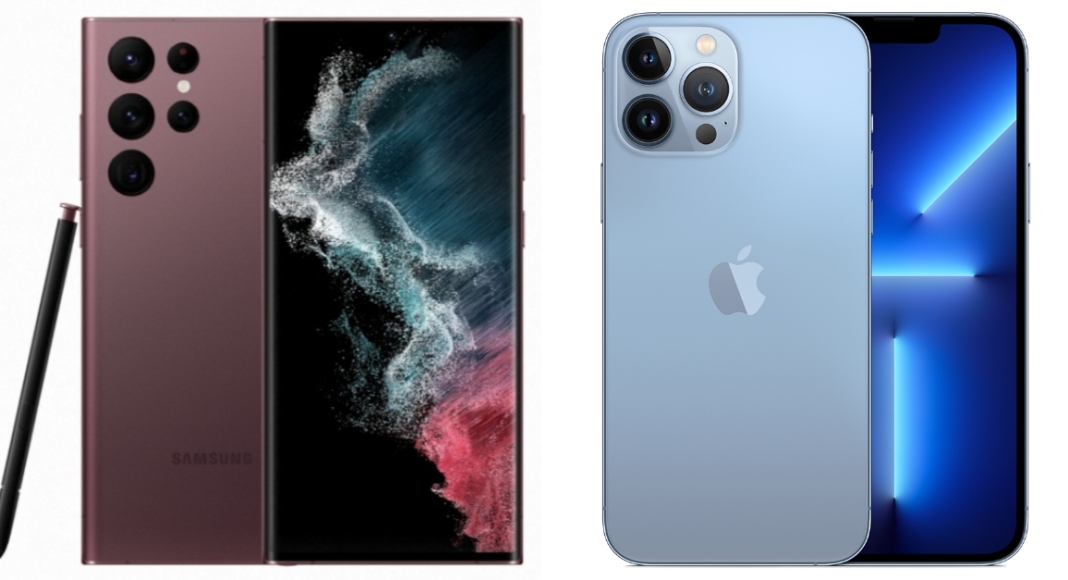 Samsung, the South Korean smartphone manufacturer, presented the all-new Samsung Galaxy S22 Series at this year’s inaugural Galaxy Unpacked event. The Galaxy S22, Galaxy S22+, and Galaxy S22 Ultra are the three models in the lineup. The Ultra is the most expensive of the smartphones, and it also serves as a successor for the company’s successful Galaxy Note series, as it has an upgraded S Pen.

Even before we use it, the first thing that comes to mind is the design. So, when it comes to design, we liked the iPhone 13 Pro Max over the Galaxy S22 Ultra since it has a more eye-catching appearance and appears more luxurious. However, going with the Ultra would be our choice because the front panel has precisely the appropriate size camera punch hole, whereas the iPhone has a larger camera notch. Another advantage of the Samsung flagship is that it supports the S Pen, which has been upgraded with Wacom technology to enable enhancements to the stylus functions, such as reduced latency. Both handsets feature excellent screens, but the one on the Samsung is noticeably brighter and has a higher resolution and pixel density.

In terms of hardware iPhone 13 Pro Max outpaces the 4nm Exynos 2200 or Snapdragon 8 Gen 1 chipset. It is much quicker and can handle anything. They, like the CPU, provide an entirely distinct user experience because one runs Android and the other runs iOS. The former will provide four years of software updates, and the latter will provide at least five years of upgrades.

As of yet, we cannot remark on the cameras of either phone because they both give the finest. However, we can confidently state that the Samsung Galaxy S22 Ultra will give the iPhone 13 Pro Max a run for its money in this category.

As a result, both smartphones provide you with top-notch features. We evaluated all of the specifications of both devices, and your decision will be dependent on your needs. However, when comparing prices, the Samsung S22 Ultra is less expensive than the iPhone 13 Pro, which may influence your decision. If you are willing to pay more money, you can get an iPhone, but we prefer the S22 Ultra.

Komila Singhhttp://www.gadgetbridge.com
Komila is one of the most spirited tech writers at Gadget Bridge. Always up for a new challenge, she is an expert at dissecting technology and getting to its core. She loves to tinker with new mobile phones, tablets and headphones.
Facebook
Twitter
WhatsApp
Linkedin
ReddIt
Email
Previous article
Comparison: Vivo T1 5G vs Moto G51 5G vs Redmi Note 11T
Next article
11 February 2022 Amazon Quiz today answers: Answer to win Rs 5,000 Amazon Pay Balance