Comparison: Xiaomi 11i HyperCharge Vs OnePlus Nord 2 Vs Vivo V23 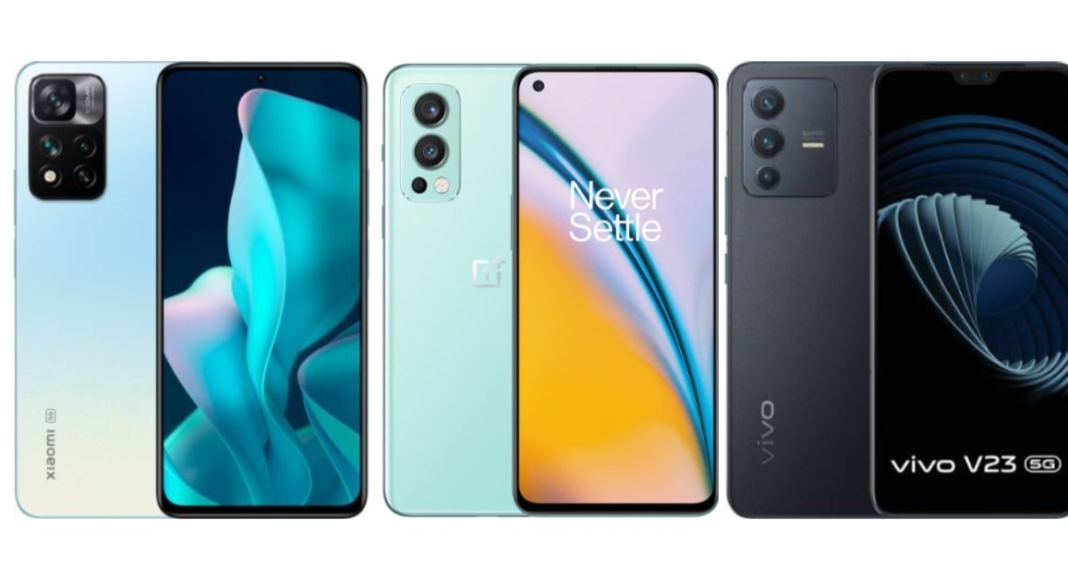 Xiaomi kickstarted the new year with the launch of the much-hyped Xiaomi 11i HyperCharge in the Indian market. The device is a rebranded variant of the Redmi Note 11 Pro+ which was launched in India last year. The biggest USP of the smartphone is its 120W fast charging support. Besides this, the phone comes with an AMOLED display and a 108MP triple rear camera set up.

Today, we’ve compared it to the recently released Vivo V23 smartphone and the OnePlus Nord 2 smartphone, which you should read before purchasing one when the Xiaomi smartphone becomes available in the nation.

OnePlus Nord 2: Triple rear camera set-up that includes a 50-megapixel IMX766 primary sensor with OIS. Under the hood, there is an 8-megapixel secondary sensor and a 2-megapixel tertiary sensor.

Xiaomi 11i HyperCharge and Vivo V23 both run on the MediaTek Dimensity 920 chipset whereas the Nord 2 equips a more powerful Dimensity 1200 SoC. Apart from this both Xiaomi and Vivo smartphones come with a 120Hz AMOLED display while the OnePlus device offers a 90Hz AMOLED display. In terms of rear cameras, Xiaomi defeats both of its competitors.

On the other hand, Vivo takes the lead by offering a dual selfie camera set up. But again Xiaomi 11i HyperCharge outshines the other two as it supports 120W fast charging which is claimed to charge the device in just 15 minutes. This would benefit those who are constantly on the go. In terms of appearance, usage, and specs, all three phones are virtually identical. So, until we get the opportunity to test both Vivo and Xiaomi devices we would suggest you to go for HyperCharge.

Komila Singhhttp://www.gadgetbridge.com
Komila is one of the most spirited tech writers at Gadget Bridge. Always up for a new challenge, she is an expert at dissecting technology and getting to its core. She loves to tinker with new mobile phones, tablets and headphones.
Facebook
Twitter
WhatsApp
Linkedin
ReddIt
Email
Previous article
Comparison: Vivo V23 Pro 5G vs Oppo Reno 6 Pro 5G
Next article
Now get benefits of up to Rs 17,000 on Samsung Galaxy Z Fold 3 and Galaxy Z Flip 3: Here is how