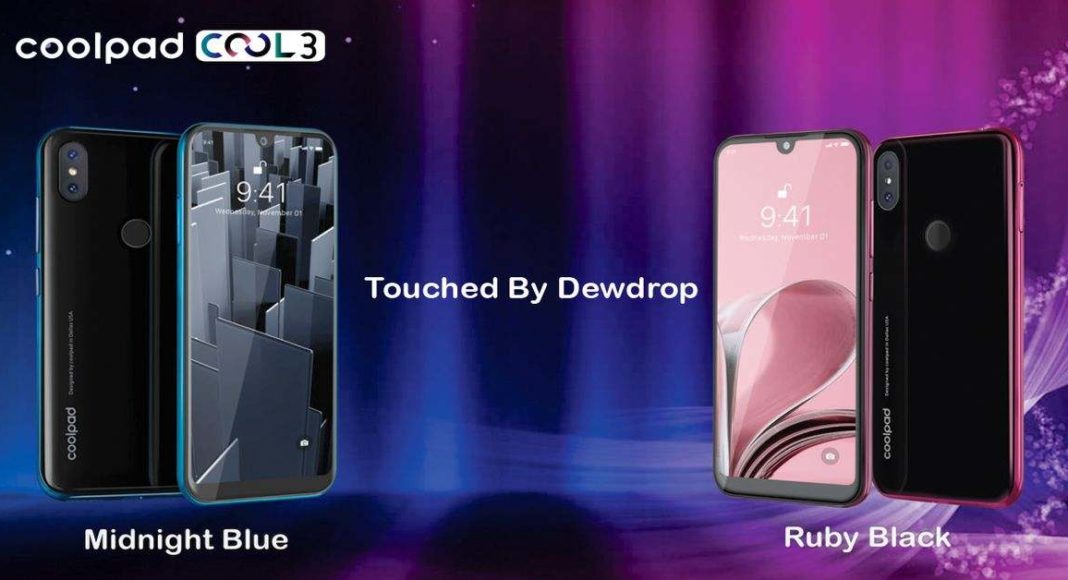 Coolpad launched its three Mega smartphones in India in December last year and now, it has further expanded its portfolio in the country with its Cool 3 smartphone. The Coolpad Cool 3 smartphone bears a waterdrop-shaped notch on its display, comes with a dual rear camera setup and has a rear-mounted fingerprint scanner.

The handset runs the latest Android 9.0 Pie out-of-the-box, which we think is a big plus, especially considering its price. Here’s a look at the pricing details of the smartphone and its specifications:

The newly launched Coolpad Cool 3 smartphone is only available in one storage option in India, which has 2GB of RAM and 16GB of onboard storage. The smartphone is priced at Rs 5,999 in India and is available in Midnight Blue, Ruby Black, Ocean Indigo, and Teal Green colour variants. It can be bought via online as well as offline channels, but as of now, there is no word on the date of availability.

Coolpad Cool 3 smartphone runs Android 9.0 Pie and has support for dual SIM cards. The handset features a 5.71-inch HD+ display that has a screen resolution of 720×1500 pixels and is powered by the 1.3GHz octa-core Unisoc processor. The Coolpad Cool 3 smartphone comes with 2GB of RAM and 16GB of internal storage and can also hold a microSD card of up to 128GB.

For imaging duties, the newly launched device comes with a dual rear camera setup with 8MP and 0.3MP sensors. It also has a 5MP selfie camera on its front panel that is housed in a waterdrop-shaped notch. For enhanced security, the Coolpad Cool 3 smartphone has a rear-mounted fingerprint sensor and it also has support for face unlock feature.

The handset is backed by a 3,000mAh battery and for connectivity, it comes with Bluetooth 4.1, Wi-Fi, 4G VoLTE, and more.

Speaking at the launch of the smartphone, Fisher Yuan, President, Coolpad Group and South Asia said, “Coolpad is set to disrupt the budget smartphone segment in India with a stylish design, stunning specs along with superb quality. We are looking forward to offering our consumers a delightful experience and we will launch a range of affordable smartphones this year to build our presence in India.”