Facebook has been adding new features to its web and other platforms to make the user experience more pleasing and easier-to-use. And now the company has added an ability to quote and reply to specific messages within a conversation in Facebook Messenger, this new feature is much like WhatsApp’s.

According to a report by VentureBeat, with the addition of this new feature to Messenger, the users now can hold down an individual message in any conversation to ‘quote’ the message. Once held down, the user can then either add a reaction to the message or reply to it with a new ‘reply’ button. Once chosen the ‘reply’ option, the user will then be quoting the specific message he wants to reply as the message will be highlighted with a bubble and the user’s reply will go below it.

This new feature will make it easier for the users to understand what the other user is replying to and what’s the actual context. This new feature of Messenger will be helpful in group chats where the chats move fast.  The users can understand and follow the conversation even between the other users chats. Although this is not a new feature as we have already seen this feature in WhatsApp, but the addition of it to FB Messenger is a welcome one.

Earlier we saw that the social giant added a ‘remove sent messages’ feature, which lets the user delete the text message sent by them to other users. After that the platform added a ‘dark mode’ feature that makes the bright appearance of the Messenger app turn to black, this feature was added to help the users have less strain on their eyes. And since most of the popular social platforms already have a ‘dark theme’ on them, the social giant Facebook’s addition of the mode to their platform comes late. 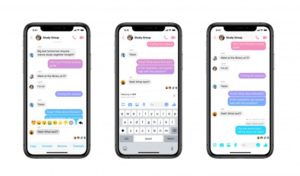 The addition to Messenger comes after Facebook’s announcement of integrating all of its three platforms into one – WhatsApp, Instagram and Messenger. But the announcement was received with heavy criticism from the users after which the social giant cancelled its thoughts about the integration.

But Facebook then went on to expand this idea in other ways as it outlined the ‘interoperability across its platforms’, which is one of its many goals. And the addition of one of the features from WhatsApp seems to be another step closer to achieving the integration.

Aman Singhhttps://www.gadgetbridge.com/
Aman Kumar Singh has a Masters in Journalism and Mass Communication. He is a journalist, a photographer, a writer, a gamer, a movie addict and has a love for reading (everything). It’s his love of reading that has brought him knowledge in various fields including technology and gadgets. Talking about which, he loves to tweak and play with gadgets, new and old. And when he finds time, if he finds time, he can be seen playing video games or taking a new gadget for a test run.
Facebook
Twitter
WhatsApp
Linkedin
ReddIt
Email
Previous articleXiaomi Redmi Go first sale starts today at 12 noon: Here are all the details
Next articleSamsung Galaxy A50 review: A beautiful powerhouse