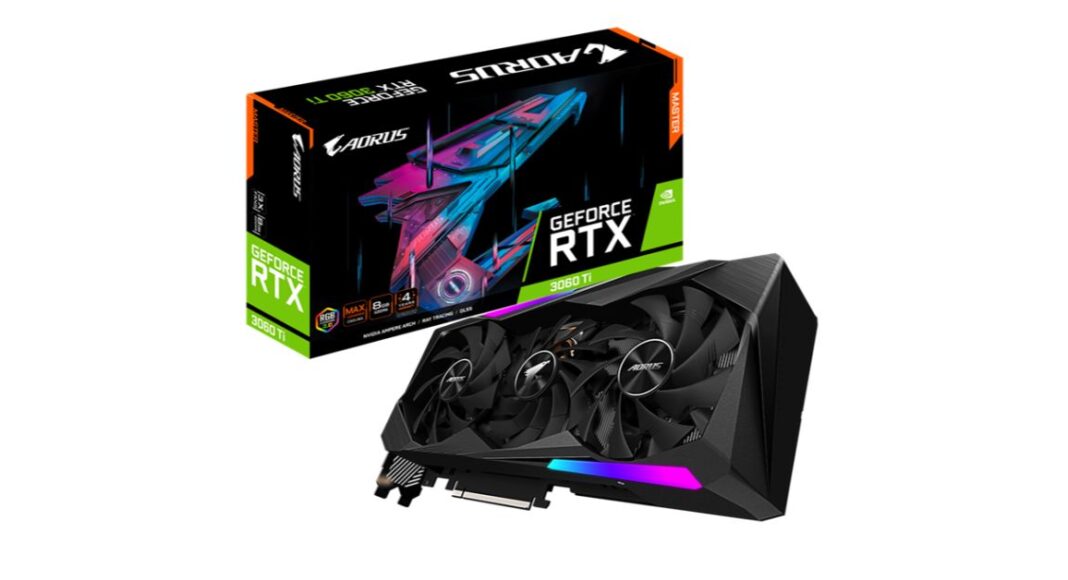 The RTX 3060 Ti comes with the trifecta of GeForce gaming innovations support that enhances the performance as well as IQ-enhancing NVIDIA DLSS technology. Whereas; NVIDIA Reflex helps in reducing system latency which makes the games more responsive therefore giving an extra edge over the opposition to the players in competitive multiplayer titles. The NVIDIA Broadcast is a suite of audio and video AI enhancements that include virtual backgrounds and noise removal that can be applied by users while chatting, Skype calls and video meetings. According to the company when players are playing traditional PC titles, powering through creator and productivity workflows, or marveling at the latest cutting-edge ray-traced titles like Cyberpunk 2077, Call of Duty: Black Ops Cold War, Watch Dogs: Legion, and more, the GeForce RTX 3060 Ti delivers the best possible experience in its class for everyone everywhere.

The AORUS GeForce RTX 3060 Ti MASTER 8G graphics card comes with cooling features with three 100mm unique blade stack fans with wind claw design and alternate spinning, so the air pressure can completely cover the heatsink. According to the company, the heat dissipation area of the heat-sink is more than the previous generation. Whereas with the big copper plate and 7 composite heat-pipe, the heat of the GPU and VRAM can be dissipated quickly. In addition to this, it also includes Screen cooling technology for the extended fins that allow airflow to pass through. The graphic card comes embedded with an LCD monitor on its side that allows to set up various modes such as enthusiast tic mode, text mode, image mode and GIF mode. This allows you to edit all kinds of content that you like or set it as CHIBI Time to enjoy the changes of the little falcon every hour. RGB Fusion 2.0 allows you not only to set the lighting effects of the entire graphics card and LCD monitor but also to synchronize the lighting with other AORUS devices. It also features 6 video output connectors, aerospace-grade PCB coating, Dual BIOS quiet operation mode, and ULTRA DURABLE certified components.

The GeForce RTX 3060 Ti GAMING OC PRO also includes three unique blade fans, alternate spinning, composite copper heat pipes direct touch GPU, 3D active fan and Screen cooling, which together temperature at any time, resulting in higher and more stable performance. The fan in the middle spins in the reverse direction to optimize airflow for heat dissipation.  The Screen cooling offers the heatsink to allow airflow to pass through. While the graphene nano lubricant is said to extend the fan life by 2.1 times, close to the life of double ball bearing, and is quieter. The RGB fusion 2.0 let the users adjust the colour of the lights and various special effects, and synchronize with other AORUS devices.

Lastly, the GeForce RTX 3060 Ti EAGLE OC has WINDFORCE 2X cooling technology features 2x 100mm unique blade fans, Ultra-Durable components, graphene nano lubricant, and Screen cooling for better heat dissipation and computing performance. This graphics card is fir for gamers who prioritize personalization. The RGB light on the side, allows the users to adjust the colour of the lights and various effects through RGB fusion 2.0, and synchronise with other AORUS devices. It uses a multi-phase power supply design to allow the MOSFET to operate at a lower temperature, and over-temperature protection design and load balancing for each MOSFET, plus the Ultra Durable certified chokes and capacitors. While the black pate prevents the PCB from bending or falling parts.

Komila Singhhttp://www.gadgetbridge.com
Komila is one of the most spirited tech writers at Gadget Bridge. Always up for a new challenge, she is an expert at dissecting technology and getting to its core. She loves to tinker with new mobile phones, tablets and headphones.
Facebook
Twitter
WhatsApp
Linkedin
ReddIt
Email
Previous article
COVID-19 crisis: Samsung unlikely to introduce premium Galaxy Note smartphones in 2021
Next article
LG ‘DigiTour’ 3D Showroom helps drive business during pandemic