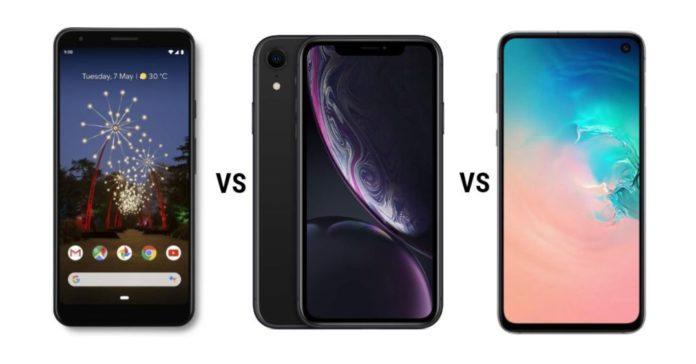 After months of leaks and rumours, Google has finally taken wraps off its Pixel 3a and Pixel 3a XL smartphones. As the names suggest, the handsets are the watered down versions of Google’s flagship smartphones. With Pixel 3a and Google Pixel 3a XL, the company has made its much-talked-about ‘Pixel 3’ cameras available to people at a relatively affordable price.

Since Google has launched the affordable versions of its smartphones, we decided to compare it with watered down flagship smartphones of other technology giants. And what could have been better than comparing it with Apple’s and Samsung’s smartphones, given that the three companies are always competing.

Here, we have compared all the specifications of the newly launched smartphone with Apple iPhone XR and Samsung Galaxy S10e. All the three devices are affordable versions of Google, Apple and Samsung’s flagship smartphones respectively. If you want to buy a smartphone that has premium features but it priced relative lesser than flagship devices, these three are good options to choose from. Read our comparison and decide which among the three is the best for you:

Garena Free Fire Redeem Codes Today 13 May 2022: Here is how to claim them