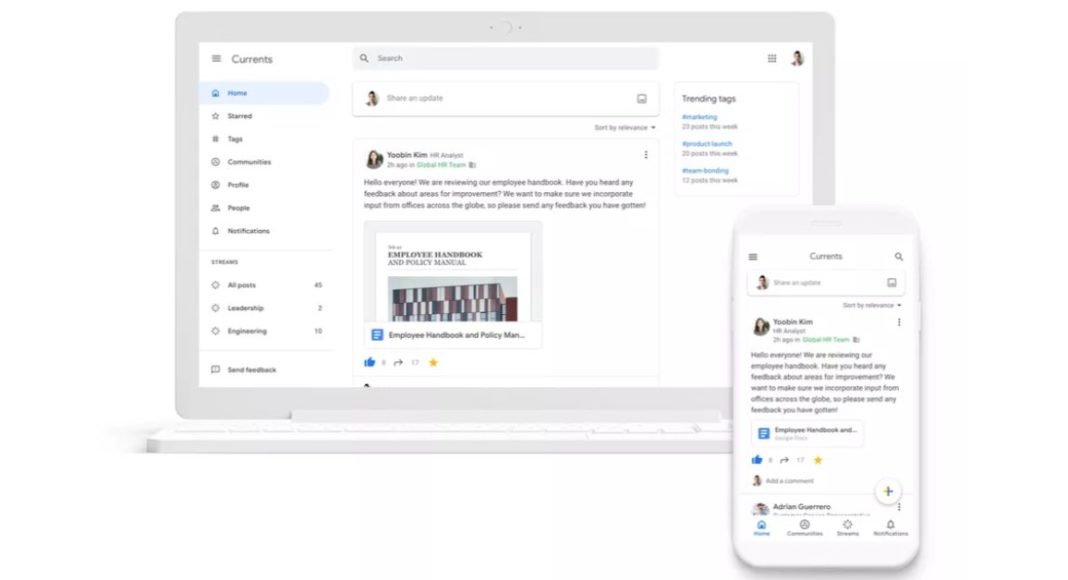 At the beginning of this month, Google finally killed off its social networking website – Google+. However, it seems like the company already had a Plan B ready before it bid farewell to Google+. The search giant has rolled out an app specifically for its G Suite users called Currents.

The company has said that the newly launched app “enables people to have meaningful discussions and interactions across your organization, helping keep everyone in the know and giving leaders the opportunity to connect with their employees.”

According to Google, Currents has a fresh look and feel about itself, as compared to Google+. The app is said to be designed in a way that it makes it easier for users to post content and tag it quickly. You can add people from your own company to Currents and the app will automatically give more priority to posts from your firm’s top executives in order to make sure that all employees get to see them.

As of now, Google’s Currents app is available in beta, and the search giant has said that G Suite companies can request access for it. Furthermore, people’s or company’s Google+ posts will be transferred automatically to the Currents app. However, it is worth adding here that these would only be from Google+ accounts linked to G Suite, not the personal ones.

To introduce the app to the world, Google has said on its blog post, “Currents is replacing Google+ for G Suite, and has a new look, feel, and set of features. All of your organization’s existing Google+ content will automatically transfer to Currents once you are enrolled in the beta.”

It also added that this move will affect both end users as well as admins.

Google also placed emphasis on how the network is meant to connect with people working in the same company as you. It said, “Currents connects employees to useful and timely content that is personalized to their role and interests. Giving employees access to relevant content keeps them connected to the organization and creates more learning opportunities.”

Speaking on the same top, it further added, “Content in the home stream is ordered by relevance so it’s prioritized for what is most important to that individual, or users can choose to sort it chronologically.”

Avani Baggahttp://www.gadgetbridge.com
Avani has an immense love for reading, travelling and food, but not necessarily in the same order. Avani almost started pursuing law, but life had other (better) plans for her and she chose to be a writer instead (luckily!) She previously covered technology at Times Internet and wrote about smartphones, mobile apps and tech startups. When she’s not writing, you’ll be able to find her in book stores or catching up on her social life.
Facebook
Twitter
WhatsApp
Linkedin
ReddIt
Email
Previous article
Google adds a new 2-Step Verification process to make the user accounts more secure
Next article
Redmi Y3 with 32MP selfie camera teased to launch in India soon