If you have been waiting for Google Stadia, we have some news for you. Google Stadia controllers will not work with Bluetooth headsets at the time of its launch. Users would instead have to plug in a set of wired headphones into the 3.5mm jack of Stadia’s controller. But then, players who have a Pixel smartphone or Chrome to play Stadia games will be able to connect their Bluetooth headphones with their PC or handset to listen to the audio of the game that they are playing.

Andrey Doronichev, Stadia Product Director, who took to Reddit AMA to talk about the controller said, “The Stadia controller comes with a headphone jack for wired audio, but won’t support Bluetooth audio at launch in November. If you’re playing on the computer or a Pixel phone you can connect the BT headset to it directly and use it in Stadia.”

Doronichev has also hinted that Stadia will not be offering any free-to-play games. He said, “No free games on Stadia Base. But hey, Stadia Base gives you free access to the state-of-the-art gaming hardware in our datacenter. You spend your money to buy games you want.”

The California-based technology giant has announced that Google Stadia will first be coming to 14 countries including the US, Canada, UK, Ireland, France, Italy, Spain, the Netherlands. A few other regions will also be getting the service. But as of now, there is no word on when it will come to India.

At the time of launch, Google Stadia will be able to work on laptops, desktops, Chromecast Ultra TV streaming sticks, tablets and the Pixel 3 devices. Later, more smartphones and tablets will be able to run the service, according to the company.

We should mention that Google Stadia controller is an optional $70 accessory. This will connect wirelessly to the internet to play games. The company has said that it will be available in three colours: Black, Clearly White, and Wasabi (green). 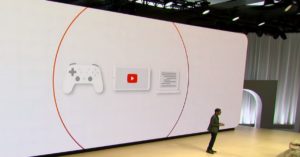 In addition to this, the games that will be available at the time of launch have also been announced. These include:

Avani Baggahttp://www.gadgetbridge.com
Avani has an immense love for reading, travelling and food, but not necessarily in the same order. Avani almost started pursuing law, but life had other (better) plans for her and she chose to be a writer instead (luckily!) She previously covered technology at Times Internet and wrote about smartphones, mobile apps and tech startups. When she’s not writing, you’ll be able to find her in book stores or catching up on her social life.
Facebook
Twitter
WhatsApp
Linkedin
ReddIt
Email
Previous articleHuawei Y9 Prime 2019 teased on Amazon India, to be launched soon
Next articleThis petition demands Redmi K20 price in India to be slashed