This cannot be called as getting inspired.

Getting inspired from each other is nothing new in the smartphone industry. We see it happen a number of times every year. When Apple launched its futuristic-looking iPhone X, there was hardly any smartphone maker that didn’t draw inspiration from the design of the handset. But then, it is one thing to get inspired, and an entirely different thing out-rightly copy. We are talking about Xiaomi. The Chinese technology brand has introduced new avatars for its Xiaomi Mimoji feature. Which many reports from all over the world have said look just like Apple’s Memoji, they have gone ahead and even spoken about the similarity in the name.

Like said, the Chinese company has gone ahead and released its own version of animated mobile bob-heads, which look very similar to the one Apple had released last year. Talking more about the Xiaomi Mimoji, according to Engadget’s Chinese version, the company’s AR avatars are a lot like Apple’s Memoji and even the facial expressions and the colour palette that has been used looks similar.

Xiaomi’s Mimoji avatars earlier used augmented reality to mimic a smartphone user’s facial expressions on anthropomorphic animals. However, with the launch of Xiaomi’s Mi CC9 smartphones, the feature now contains human avatars that look very similar to the ones you see on Apple’s. With this, the feature from the company is drawing a lot of flak from the tech fraternity because it has picked the feature completely from the Cupertino-based technology giant. Even the name Mimoji is being highlighted a lot because of its extreme similarity.

But then, there are a few more facts involved. Firstly, the Cupertino-based technology giant does not own the concept of AR-based virtual avatars and it does not have the trademark for Memojis either. Furthermore, the concept existed even before Apple introduced it at WWDC 2018. To recall, Samsung was quicker than Apple and Xiaomi to come up with its AR Emojis in Galaxy S9 in February last year. 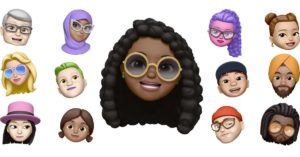 However, many on social media and otherwise have argued how similar Xiaomi‘s Mimoji feature is to Apple’s Memoji, it looks blatantly copied some said. Over that, Xiaomi’s PR executives are actually threatening to take legal action against any forum posters in China for noting the similarities between the two.

While this may seem minor to a giant like Apple, the Mimoji is a good example of how companies at times tend to overlap, on some features, with each other in the smartphone industry. It also reminds us that laws around copyright, trademark and patent are very inconsistent and hence, these also need to be strengthened.

Xiaomi Global has issued a statement Via Xu Jieyun (PR Head, Xiaomi) regarding the topic related to Mimoji:

1. How does Mimoji of Xiaomi and Apple’s Memoji name look alike?

A: When Xiaomi released the first generation of Mi Meng in May 2018, the English name was called Mimoji, and the package name of the APK was also called Mimoji. Apple enabled Memoji on June 5, 2018. The functional logic of the two products is very different.
In fact, the etymology comes from Emoji (Japanese: “Imitation” Roman spelling).

2. Why is the statement very slow and issued only one day after the incident?

With the statement, Xiaomi has said that they were the ones who came up with the animated Avatars and the name before Apple. We still await Apple’s response on the same.

Avani Baggahttp://www.gadgetbridge.com
Avani has an immense love for reading, travelling and food, but not necessarily in the same order. Avani almost started pursuing law, but life had other (better) plans for her and she chose to be a writer instead (luckily!) She previously covered technology at Times Internet and wrote about smartphones, mobile apps and tech startups. When she’s not writing, you’ll be able to find her in book stores or catching up on her social life.
Facebook
Twitter
WhatsApp
Linkedin
ReddIt
Email
Previous article
15 Microsoft Word keyboard shortcuts you need to know
Next article
WhatsApp beta version spotted with a QR Code Shortcut: Here’s more on it