Honor 20i and Honor Magicbook 2019 to be launched soon, Honor 20i Lite details leaked 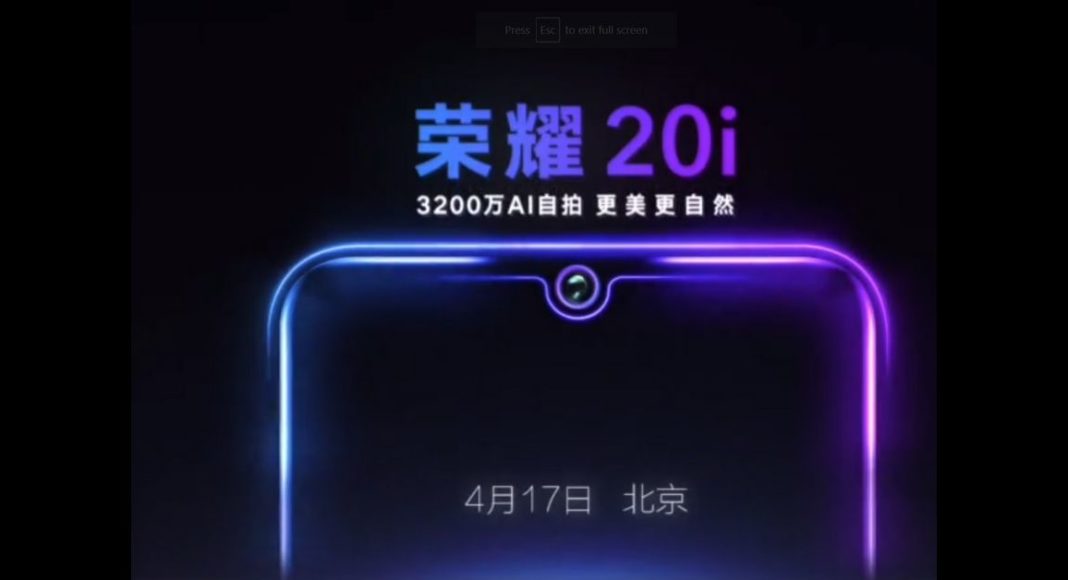 Honor will soon be seen launching the Honor 20i with a 32MP AI selfie camera soon. The company has confirmed this itself saying that the Honor 20i smartphone will be launched on April 17 in Beijing, China. After revealing the launch date of the Honor 20i, the company also released a teaser video on Weibo that showcases the waterdrop-style notched display on the smartphone. Along with the Honor 20i, the company has also confirmed the launch of the Honor Magicbook 2019, which will be a successor of the original Honor MagicBook. The successor notebook will come with a better performance and a better battery than its predecessor

In addition to this, the specifications of the Honor 20 Lite have also surfaced online. The Honor 20i Lite will be the more affordable and a watered-down variant of the original device.

The Honor 20i is expected to sport a 6.2-inch Full-HD+ (1080 x 2340 pixels) display. It is expected to be powered by an octa-core HiSilicon Kirin 710 SoC clocked at 2.2GHz paired with 4GB/6GB RAM. The Honor 20i might come with 64GB/128GB storage options. The device is expected to pack a 3,400mAh battery. Although some specifications of the Honor 20i have surfaced online, the pricing and other details of the device are currently not available.

According to the company, the next device, the Honor Magicbook 2019 might be launched on April 17 as well. The new Magicbook 2019 will be a successor of the last year’s Magicbook from Honor. The teaser image of the new Honor Magicbook 2019 shows that the new model of the laptop will most probably come with some performance upgrades, better battery life along with an improved graphics.

Honor 20i Lite is expected to sport a 6.21-inch Full HD+ (1080 x 2340 pixels) display with 415 ppi pixel density. The images were leaked on WinFuture.de and according to the leaks, the Honor 20i Lite will be powered by a HiSilicon Kirin 710 SoC paired with 4GB of RAM and 128GB of storage. Reportedly, the device will also come with microSD card support. The Honor 20i Lite is said to run Android 9 Pie skinned with EMUI, and much like its bigger sibling, Honor 20i will pack a 3,400mAh battery.

On the camera front, the Honor 20i Lite is expected to sport a triple-rear camera with a 24MP main camera sensor with an f/1.8 aperture along with an 8MP ultra-wide-angle sensor with a 120-degree paired with a 2MP depth sensor

Other reported features of the Honor 20i Lite are Wi-Fi and Bluetooth v4.2. The phone is also claimed to have two NanoSIM card slots. The Lite version of the Honor 20i will most probably come with gradient back panels along with fingerprint scanner at the back.

Aman Singhhttps://www.gadgetbridge.com/
Aman Kumar Singh has a Masters in Journalism and Mass Communication. He is a journalist, a photographer, a writer, a gamer, a movie addict and has a love for reading (everything). It’s his love of reading that has brought him knowledge in various fields including technology and gadgets. Talking about which, he loves to tweak and play with gadgets, new and old. And when he finds time, if he finds time, he can be seen playing video games or taking a new gadget for a test run.
Facebook
Twitter
WhatsApp
Linkedin
ReddIt
Email
Previous article
Google Pixelbook group to launch new laptops and tablets in future: Here are all the details
Next article
Amazon India’s Fab Phones Fest sale set to begin on April 11: Here’s a list of all the discounts and offers