Honor 8C to be launched in India on November 29, gets listed on Amazon 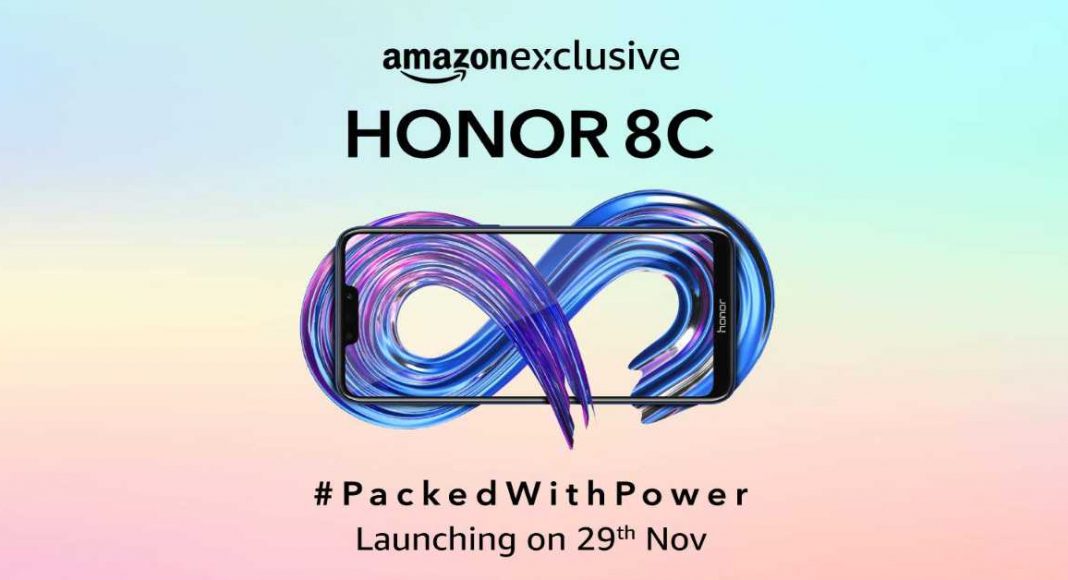 Huawei’s sub-brand Honor launched its 8X smartphone in India last month. And now, the company is set to launch its Honor 8C smartphone on November 29 in India.

Since Amazon India has a dedicated page for the device with the ‘Notify Me’ button, it is safe to assume that the smartphone will be exclusively available on the e-commerce website. Amazon India’ website also states that Honor 8C is the first ever smartphone to come with Qualcomm’s Snapdragon 632 processor. Other specifications that we found on the page were a 4,000mAh battery, AI-enabled dual rear cameras and a 6.26-inch display panel that will come with an aspect ratio of 19:9.

It was earlier reported by IANS that Honor 8C will be priced at Rs 15,000 in India. The same report also said that the smartphone will be available in two variants — one with 4GB of RAM and the other with 6GB of RAM. Both the variants will have 64GB of storage onboard. The Honor 8C mobile was also launched by the company in China last month.

Coming to the specifications of the device, Honor 8C runs Android 8.1 Oreo skinned with EMUI 8.2 and comes with dual SIM functionality. The smartphone features a 6.26-inch HD+ (720×1520 pixels) TFT LCD IPS display that has an aspect ratio of 19:9, a pixel density of 269ppi and a screen-to-body ratio of 86.6%.

The Chinese version of the smartphone does not only differ in terms of storage, but processor too. In China, the Honor 8C smartphone comes with an octa-core Qualcomm Snapdragon 626 SoC that is clubbed with Adreno 506 GPU. The smartphone is available with 4GB of RAM and has two storage models — one with 32GB storage and the other with 64GB storage. In case users need more storage, they can install a microSD card of up to 256GB.

For imaging duties, Honor 8C sports a dual rear camera setup with a 13MP primary sensor with f/1.8 aperture and a 2MP secondary monochrome sensor with f/2.4 aperture. The smartphone comes with an 8MP selfie camera with f/2.0 aperture and fixed focus. Honor 8C smartphone houses a 4,000mAh battery that has support for 5V/2A (10W) charging. Both the primary and selfie cameras of the smartphone are clubbed with an LED flash and come with AI-based features — just like we saw in Honor 8X (review).

On connectivity front, Honor 8C comes with 4G VoLTE, Wi-Fi, Bluetooth v4.2 LE with aptX, GPS/ A-GPS, a Micro-USB port, and a 3.5mm headphone jack. The sensors of the smartphone include an accelerometer, an ambient light sensor, an electronic compass, a fingerprint sensor, and a proximity sensor.

Avani Baggahttp://www.gadgetbridge.com
Avani has an immense love for reading, travelling and food, but not necessarily in the same order. Avani almost started pursuing law, but life had other (better) plans for her and she chose to be a writer instead (luckily!) She previously covered technology at Times Internet and wrote about smartphones, mobile apps and tech startups. When she’s not writing, you’ll be able to find her in book stores or catching up on her social life.
Facebook
Twitter
WhatsApp
Linkedin
ReddIt
Email
Previous article
DreamHack’s first eSport festival in Asia will be held in Mumbai
Next article
[Video] This Week In Tech: Episode 5 (November 19 – November 25)