The smartwatch made its debut at IFA 2020 this month 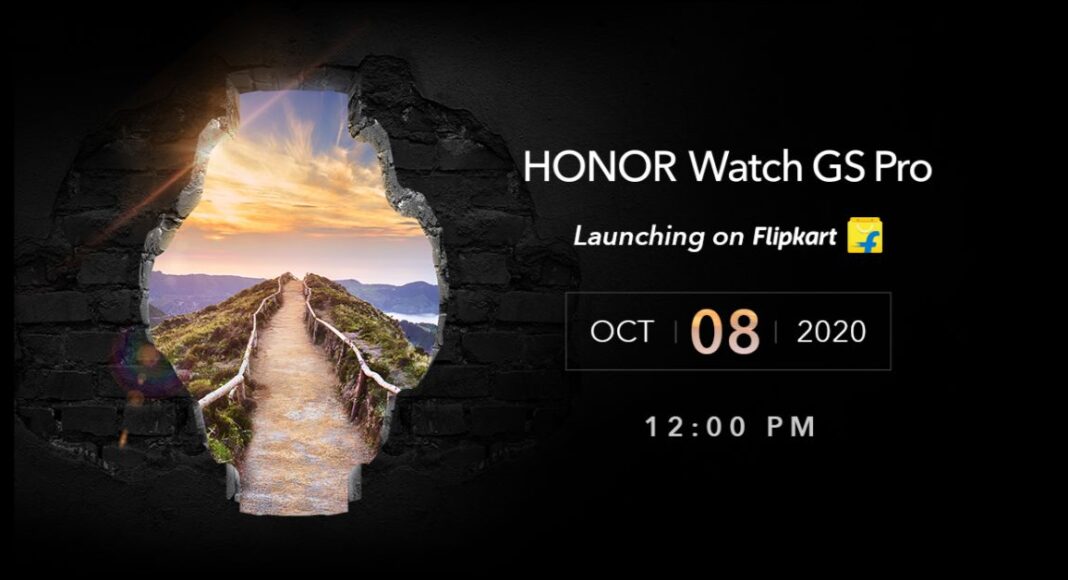 Huawei’s sub-brand Honor is all set to launch its Honor Watch GS Pro in India on October 8. The company is now teasing its upcoming device through the e-commerce website Flipkart. To recall the smartwatch was introduced alongside Honor Watch ES at IFA 2020 earlier this month. The upcoming rugged style wearable by the Chinese company is MIL-STD 810G-rated and comes loaded with needed health and fitness features. In addition to this, the company is also expected to introduce Honor Choice True Wireless Earbuds alongside the smartwatch.

Honor took to Twitter to announce that on October 8 in India it is arriving with Honor Watch GS Pro. Side by side the company is also teasing the smartwatch via Flipkart which says Launching on Flipkart on October 8 at 12 noon.

While a report suggests that the company is also expected to launch Honor Choice True Wireless Earbuds on the same day. It is speculated to make its debut in the country as the company’s first TWS earbuds to be priced under Rs 5,000.

Coming back to the smartwatch at IFA this year the Honor Watch GS Pro was launched with a price tag of EUR 249.99 that translates to Rs 21,600. The company is expected to offer the watch at a similar or lesser price point.

The Watch GS Pro features a circular dial with a 1.39-inch AMOLED display with 454×454 pixels of resolution. It is powered by Kirin A1 SoC which is seen on Huawei Watch GT 2 and FreeBuds 3. It comes with 4GB of storage and is compatible with both Android and iOS devices. It has GPS support for location tracking with dual satellite positioning systems.

The Honor Watch GS Pro offers multi-skiing modes it also provides information related to at what time the sun will rise or set with the moon and tidal phases. In addition to this, it can also send bad weather alerts. The smartwatch also includes  100 workout modes with 15 professional and 85 customised modes along with health monitoring features that include real-time heart rate monitoring, sleep tracker and SpO2 monitor to keep track on the blood oxygen level. The smartwatch also allows you to take calls as there are a built-in speaker and microphone with the ability to send and receive messages

Komila Singhhttp://www.gadgetbridge.com
Komila is one of the most spirited tech writers at Gadget Bridge. Always up for a new challenge, she is an expert at dissecting technology and getting to its core. She loves to tinker with new mobile phones, tablets and headphones.
Facebook
Twitter
WhatsApp
Linkedin
ReddIt
Email
Previous article
Mi 10T and Mi 10T Pro with 144Hz display and Mi 10T Lite with 120Hz display launched
Next article
Apple iPhone 12 likely to be supplied without headphones