Huawei Nova 4 to launch on December 17 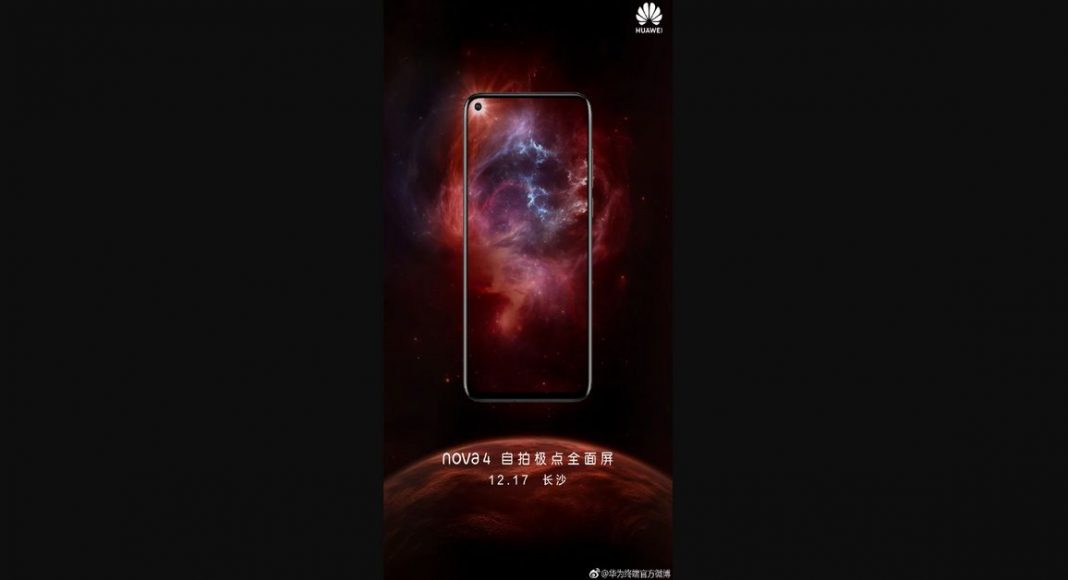 Huawei has fixed the date December 17th for the launch of Nova 4. The backdrop of this launch, as it is rumoured, is based on Huawei’s wish to compete with Samsung’s Galaxy A8s launch. Huawei Nova 4’s unique feature is that it has a display hole for the selfie camera.

Yes, there will be a small hole in the screen on the top left edge for the front camera. This brand-new model, which includes the latest Kirin 980 SoC, 6GB RAM, 128GB storage is going to release in China first. Huawei Nova 4 has an in-display fingerprint sensor and works on Android 9 Pie out-of-the-box. The company took to Weibo to announce the launch of its upcoming Huawei Nova 4 smartphone.

According to leaked renders, Samsung Galaxy A8s would also has a similar feature in terms of camera—a display with a small cut out for the selfie camera. Samsung too is suspected to release its phone during December and in all probability will directly compete with Huawei Nova 4.

Huawei has also put a teaser image. In this, we can see Huawei Nova 4 has a striking resemblance to the upcoming Samsung Galaxy S10, if we go by its leaked renders, too. One difference is that Samsung’s front facing camera is supposed to be built on the top right side, and in case of Huawei Nova 4 it would appear in the top left-hand side.

With the launch of Huawei Nova 4 the company would be expecting good demand for the smartphone. Considering that it has a notchless camera, which a lot of users would be looking forward to. If the feature turns out to be a huge hit, it might even beat some of the biggest names in the market. At the moment with the teaser image it seems Huawei has taken the right step. More insights to the smartphone in the coming days will make it clear how good the device will really be.