The smartphone is tipped to be priced under Rs 18,000. 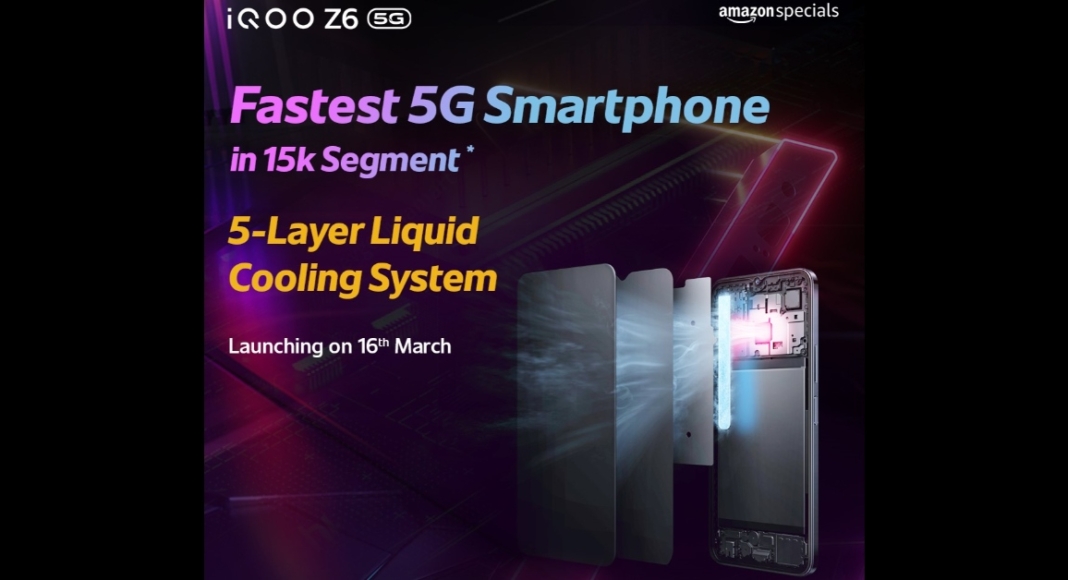 After confirming iQoo Z6 5G arrival in India. Vivo’s sub-brand today confirmed the India launch date which has been scheduled for March 16. Prior to this, the firm did not confirm the India launch date instead it separately created a microsite to tease the upcoming handset. The phone is a successor of iQoo Z5 5G which was launched in the country last year.

Ahead of the March 16 India launch, iQoo Z6 5G’s specifications have also been released ahead of the debut of the mid-range smartphone. The next smartphone’s pricing has also been hinted at by iQoo.

The special page teases the key specification of the upcoming phone. Under the hood of the smartphone will be a Snapdragon 695 SoC coupled with undisclosed LPDDR4X RAM. It will also include a 6.58-inch display with a 120Hz refresh rate and DCI-P3 broad colour gamut coverage. According to the business, the iQoo Z6 5G will also include a five-layered liquid cooling system for thermal management. According to the firm, this reduces the surface temperature of the smartphone by roughly 3 degrees and the CPU temperature by around 10 degrees while playing CPU-intensive games.

As per the dedicated microsite, the iQoo Z6 5G has achieved an AnTuTu benchmark score of 4,10,563 points, which is said to be more than the 3,92,543 score of a smartphone equipped with a Snapdragon 750G CPU. The gadget is believed to include 8GB of RAM that can be expanded to 4GB through the virtual RAM 2.0 capability.

The smartphone is finished in glossy black colour. It looks to have a flat edge with a fingerprint sensor placed on the right side of the frame on the side. There is a rectangular camera module with what seems to be a triple camera setup, a flash, and 5G branding. The device’s bottom end is likewise branded with iQoo.

The smartphone has also been listed on Amazon confirming its availability via an e-commerce platform. As per the listing, the mobile is touted to fall between the Rs 15,000 to Rs 18,000 pricing range. Previously the upcoming device was tipped to be the fastest 5G smartphone under Rs 15,000 price segment.

Komila Singhhttp://www.gadgetbridge.com
Komila is one of the most spirited tech writers at Gadget Bridge. Always up for a new challenge, she is an expert at dissecting technology and getting to its core. She loves to tinker with new mobile phones, tablets and headphones.
Facebook
Twitter
WhatsApp
Linkedin
ReddIt
Email
Previous article
Download Manager, New Attachment Menu, Live Streaming With Other Apps and More comes with the new Telegram update
Next article
Amazon Quiz Answers Today 15 March 2022: Participate to win Rs 5,000