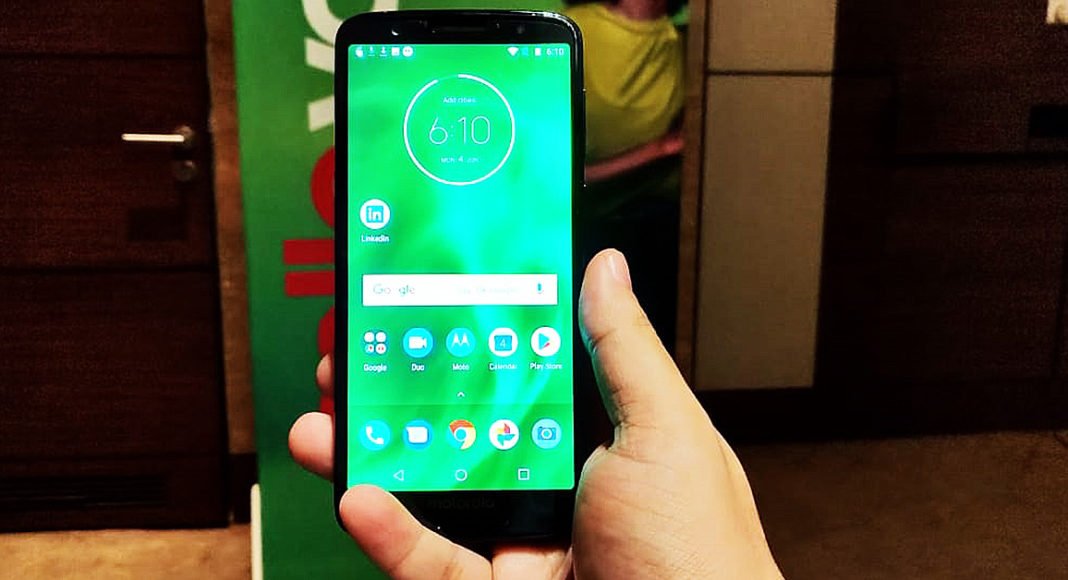 Motorola has been a brand that has seen its ups and downs. Right now it is at a stage where it has again emerged as somewhat of a force to reckon with. It has got some decent set of smartphones under its belt and with launch of G6 and G6 Play today in India it has become even stronger.

The smartphones were first showcased in Brazil in April, with a third variant called Moto G6 Plus. However, the company has gone ahead brought just the G6 and G6 Play version to India. The Plus variant will come in few weeks’ time. Moto G6 and Moto G6 Play lie in the budget segment and have decent specifications. So what are they?

Let’s start with the Moto G6 first, as this is the more powerful of the two and is aimed at audiences who can spend a little more to get that extra power in their device. Priced at Rs 13,999 for the 3 GB RAM/32GB memory version and Rs 15,999 for the 4GB RAM/64 GB memory variant, the Moto G6 sports a 5.7-inch FHD+ IPS touch screen. It is powered by the Octacore Qualcomm snapdragon 450 CPU with a clock speed of 1.8 GHz. This is fastened with Adreno 506 GPU.

Moto G6 comes with a dual camera rear setup with 12MP + 5MP sensors with f/1.8 aperture. We did test out some of the camera modes on the smartphone and quite liked the one where you can choose a colour on screen and everything else besides that particular shade turns black and white. The form factor of this phone is quite nice and is light to hold as it has just a 3,000 mAh battery inside. Which the company claims will last for a full day. Yes, it has a dual sim tray which is slightly curved, placed at the top of the smartphone.

At the moment the Moto G6 is available in only the blue shade, which when kept under a direct light source reflects an ‘S’ pattern, something seen on the OnePlus 6. Moto G6 runs Android 8.0.0 out of the box and not 8.1, which came across as strange to us as they are Google’s premium partner. This smartphone will go on sale on Monday midnight and is an Amazon Exclusive. If you have an HDFC credit card then you can get a flat discount of Rs 1,250 and up to Rs 1,000 extra on exchange of your last smartphone. Airtel prepaid users can also avail a cashback of Rs 2,000.

Next in line is the Moto G6 Play that is priced at Rs 11,999 and is available with just one RAM memory combo (3GB RAM/ 32GB memory). It too has a dual SIM tray on it which can accommodate two Nano SIM. Screen-wise this smartphone has the same size display of 5.7-inches, however the resolution is HD+ and not FHD+ like the one found on Moto G6. This one is powered by the lesser powerful Qualcomm Snapdragon 430 SoC with clock speed of 1.4 GHz.

Graphics are powered by the 505 Adreno GPU, but the battery on this one gets a boost. It can stay on for longer as it has much bigger 4,000 mAh battery that can be turbo charged. The rear of the Moto G6 Play has just one camera with a 13 MP lens, with the front one powered by an 8 MP sensor. Moto G6 Play will be available in gold and indigo colour variations and can be picked up from Flipkart exclusively (online) and offline from the Moto hub stores. There is no-cost EMI service available on this smartphone by Bajaj and there is also an assured buy back offer running of Rs 5,100 when you buy this smartphone. Moto G6 Play also runs Android 8.0 out of the box and not 8.1