Motorola One Fusion+ review: The complete package in a budget 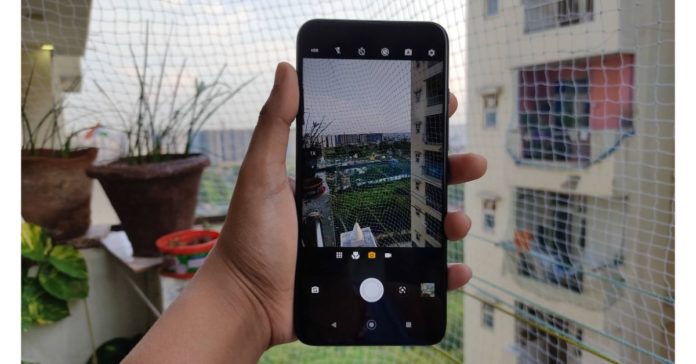 Lenovo owned company, Motorola, launched One Fusion+ in India, which is the company’s first handset that comes with a pop-up selfie camera. Also, it offers a resolution of 16-megapixels. For the unknown, this device is not the first smartphone to have a motorised front camera by Moto. Motorola One Hyper, which was launched last year but could not make it to the Indian market was companies first. Moto One Fusion+ has been launched with a price tag of Rs 16,999, giving a tough fight to its competitors that fall under the same price segment. So today we are here with the review of Motorola One Fusion+ to help you know how the phone performs and its design value while covering the other aspects of the handset.

Starting with the design first, the all-new Motorola One Fusion+ is not as new as it seems. It’s 2020, while other smartphone companies are experimenting with the build and design of their devices, Motorola is not giving something very fresh (which we found to be unusual coming for them). There is the same plastic body, though this time it has not gone just plain jane, it has textured back with the same vertical camera set up and fingerprint sensor with a batwing Moto logo. 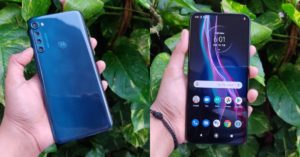 There is now a premium touch given to it that does not look more plasticky. However, the company has not provided any protected layer (in the form of screen guard) to protect the phone against scratches, which again is odd in this price segment. Moving on, not using a whole glass body makes the phone less bulky. The box comes with a phone back cover too, but one does not need it as it already has a plastic back and is good enough. But it does catch fingerprints easily so to avoid that you can use the case on the phone. 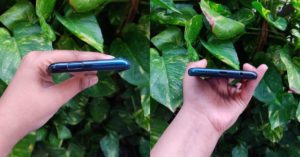 There’s no notch on the front, so you get a clean full display with slim bezels on the sides with a noticeable chin. The Volume rocker placed on the right side of the phone. While the audio jack, a USB Type-C port and a speaker are positioned at the bottom.

As said, you get a full display experience on this phone as there is no hindrance in the form of a notch. Motorola One Fusion+ comes with a 6.5-inch full-HD+ display supporting 1,080×2,340 pixels of resolution, 19.5:9 aspect ratio and 395ppi pixel density. It has an Always-On Display that will display notifications on screen as and when they come. Streaming videos on it is such a treat to your eyes as the display is sharp while the colours are vibrant. So you get an impressive nice-looking and a slim LCD panel with a standard refresh rate of 60Hz and support for DCI-P3 colours.

Motorola One Fusion+ has arrived with a Qualcomm Snapdragon 730 processor together with Adreno 618 GPU for graphics. This smartphone is only sold in a single 6GB of RAM and 128GB of internal storage model, which can be expanded up to 1TB using a hybrid microSD card.

To find out how fast the latest offering from Motorola is we ran a few benchmarking apps on it. The results below are very decent.

On the software front, you get a stock Android experience on this smartphone, which is clutter-free. Users will not find any unnecessary apps on the Motorola One Fusion+. You get a smooth performance even while multitasking. Though there are a few uninstallable apps on it, you can disable the rest if they are of no use to you. Also, you can personalise the layout of your home screen, fonts and more. This is the best part about the phone as you do not need to install a third-party app to personalise your device to change the shapes of the icons, customise UI colour and more. During the testing, it did not hang at all, which is impressive. Also, not to forget this device has the gesture shortcuts for fast access to the camera, flashlight and more. And yes there you also have nice looking live wallpapers. 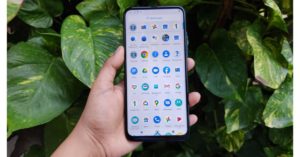 On the gaming front, Motorola One Fusion+ also did well. We ran Call of Duty Mobile and PUBG Mobile with ease. Though there is a single speaker on the phone, there is an amazing sound experience that we missed in some of the smartphones in the segment. It is loud and very clear. 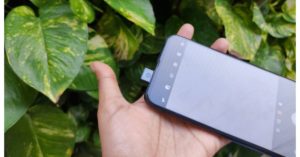 Personally speaking, Motorola devices offer the best camera performance in any price segment. Motorola One Fusion+ has various camera modes to capture the most beautiful shots. The device performed its best even in darkness; surprisingly, the pictures turned out to be soft and less noisy. It comes with a dedicated Night Vision feature which enhanced the pictures more. While the HDR Mode delivered pulsating images. 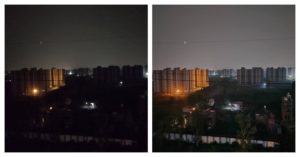 Shooting the images from the wide-angle camera also delivered good shots. Some of the images seemed to be less sharp when compared to the primary camera, but that is the case with most smartphones these days. On the other hand, the macro images on the phone captured were always impressive and sharp. We must add, the macro images produced were well detailed and came out with natural colours close to life. The portrait shots were impressive too, the edge detection on it is also on point, and you can also set the level of blur before you take one. 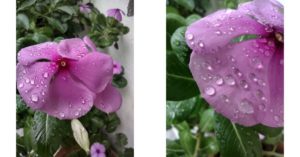 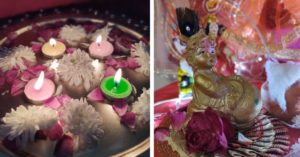 The Motorola One Fusion+ comes with a pop-up selfie camera that pops up when you switch from rear to front. The images captured here were perfect and had the right amount of details with perfect edge detection. And, the night mode comes to the rescue in low light situations. Overall the camera setup did impress us.

After all the testing, the device’s battery lasted for more than a day when used excessively. This included watching videos, movies, capturing images, gaming and browsing Facebook and checking our Instagram feed. If you are a moderate user, then it would last for 1.5 days, while for light users it can last for more than that on the Motorola One Fusion+.

On the whole, we would say the Motorola One Fusion+ has good battery life as there is a 5,000mAh battery bundled with an 18W TurboCharger in the box for faster charging. The cameras were great, and they also performed well. The rear-mounted fingerprint sensor is also quick. Motorola One Fusion+ can handle PUBG Mobile and Call of Duty well at high settings too. During the review, we did not come across any lag or heating issues. All in all, it is a whole package and gives a tough competition to other brands who are offering smartphones in this price segment.

Not happy with the design

- Advertisment -
Lenovo owned company, Motorola, launched One Fusion+ in India, which is the company's first handset that comes with a pop-up selfie camera. Also, it offers a resolution of 16-megapixels. For the unknown, this device is not the first smartphone to have a motorised front...Motorola One Fusion+ review: The complete package in a budget