Motorola teased the India launch of Moto E40 on Twitter

The specifications and pricing surfaced online ahead of the official announcements. 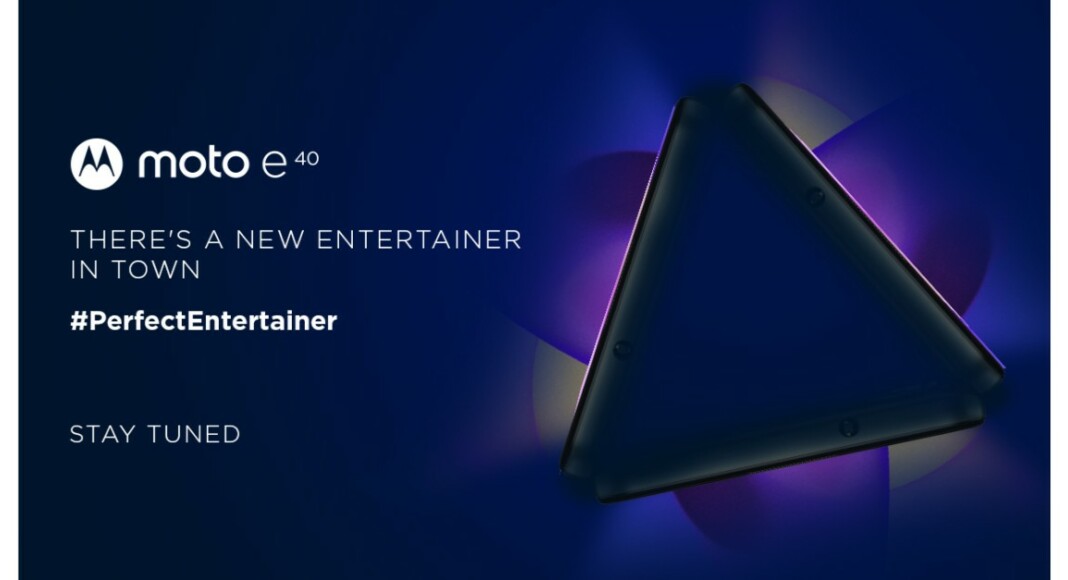 The Chinese mobile manufacturer Motorola is all set to expand its E-series of the lineup in the Indian market. The company has begun teasing the Moto E40 India launch on its social media platforms. The teaser of the upcoming smartphone does not reveal any specific launch day nor it has opened up about the key specs of the Moto E40 smartphone. Although the device’s pricing has already been tipped and the phone also got listed on a Romanian e-commerce website which revealed its key specifications.

Motorola has posted a teaser on Twitter to announce the arrival of the Moto E40 in India. The released teaser of the Moto E40 contains the tagline “The Perfect Entertainer.” The company has not yet revealed any information but ahead of the official announcement the pricing, as well as the key details of the upcoming smartphone, got revealed via a Romanian listing.

A tipster Roland Quandt (@rquandt) spotted the Moto E40 got listed on a Romanian e-commerce website. According to the eMag listing the price of the Moto E40 is set at RON 779 that is roughly around Rs 13,600.

In terms of specifications, Moto E40 is listed to come with a dual-sim functionality. The device is said to feature a 6.5 – inch HD+ IPS LCD display with a resolution of 1,600×720. There is a punch hole on the screen to house the selfies camera and the display comes with 90Hz refresh rate support.

The forthcoming Motorola smartphone is listed to be powered by a Unisoc T700 SoC, paired with 4GB of RAM and 64GB of internal storage. It will operate on Android 11 ( Go edition ).

The leaked listing suggests that Moto E40 will be highlighted with a triple rear camera set up that consists of a 48MP primary sensor. In addition to this, there will be a 2MP macro sensor and another 2MP depth sensor. In terms of selfies, the device is suggested to have an 8MP selfie camera on the front.

The eMag listing suggests that Moto E40 will include Bluetooth, Wi-Fi, GPS, 3.5mm and USB Type – C port for connectivity. While the sensors on the phone include an accelerometer, fingerprint proximity sensor, and light sensor.

Komila Singhhttp://www.gadgetbridge.com
Komila is one of the most spirited tech writers at Gadget Bridge. Always up for a new challenge, she is an expert at dissecting technology and getting to its core. She loves to tinker with new mobile phones, tablets and headphones.
Facebook
Twitter
WhatsApp
Linkedin
ReddIt
Email
Previous article
Nokia G20 Review: A battery that lasts forever
Next article
WhatsApp caught testing a custom privacy setting for profile photo on Android yet again