WhatsApp has evolved from an everyday instant messaging app to a business enabler.

National Institution for Transforming India, or NITI Aayog has today announced its partnership with instant-messaging platform WhatsApp. The deal falls under its Women Entrepreneurship Platform (WEP) and it eyes to support the growth of a robust ecosystem to promote women entrepreneurs in India. As a part of the partnership, WhatsApp will be announcing an annual calendar of events that will be aimed at building the capacity of women entrepreneurs. The two will also be developing programs to address the challenges that are faced by women entrepreneurs. We should mention that under the new initiative, the register users of WEP will be targeted.

WhatsApp will also be partnering with Women Transforming India (WTI) Awards 2019, which is the flagship initiative of NITI Aayog. The company has also decided to provide support of $1,00,000 to the winners of WTI. The WTI Awards are organised by NITI Aayog in partnership with the United Nations. The awards aim at recognising the “exceptional achievements by women who are breaking the glass ceiling and challenging stereotypes through businesses, enterprises, and initiatives aimed at solving key societal challenges.”

WhatsApp has evolved from an everyday instant messaging app to a business enabler and is now helping to bring about digital empowerment to India’s entrepreneurs. According to the press note shared by the two companies, the “entrepreneurs contribute significantly to the growing digital economy in India, though women make up less than 14% of total 58.5 million entrepreneurs in India due to various challenges including access to digital tools, and limited funding options. Partnerships between private companies and public sector help accelerate digital inclusion and give much needed access to funding so more women can achieve their business potential.”

The numbers that the two organisations have mentioned are from #startupindia women entrepreneurs study. 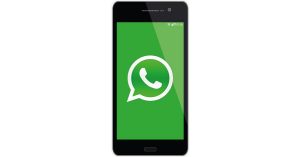 Speaking on the partnership, Will Cathcart, Global Head of WhatsApp said, “It’s our honor to partner with NITI Aayog to help support the future women business leaders of India. Small businesses are the backbone of a strong economy and I am proud of the role WhatsApp can play in helping build the next generation of India’s women entrepreneurs.”

Mr. Amitabh Kant, CEO of NITI Aayog, also spoke about the initiative saying, “India has one of the most vibrant startup ecosystems, and the next big disruptions will be driven by women-led enterprises, with digital medium being the biggest enabler. This partnership with WhatsApp underlines our mutual commitment to support the aspirations of women entrepreneurs in India.”