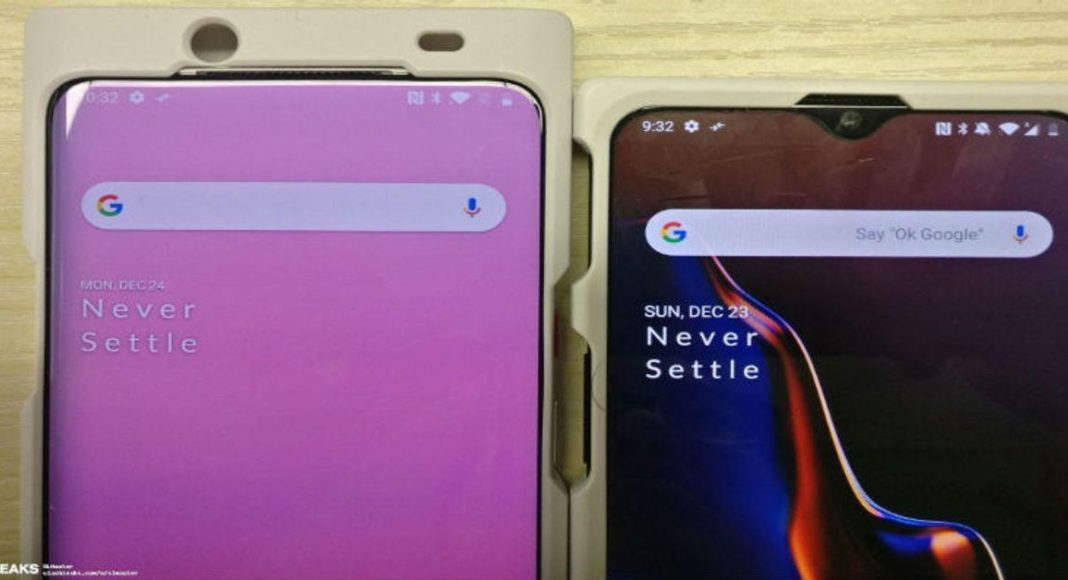 OnePlus 7 is definitely among the most awaited smartphones of the year. And reports about the upcoming device have already started surfacing online. A report has emerged that claims that OnePlus 7 will come with a camera slider and will have no bezels, much like Oppo Find X, Xiaomi Mi Mix 3 and Honor Magic 2. The first leaked image of OnePlus 7 surfaced on SlashLeaks and it shows a completely revamped design of the smartphone as compared to its predecessor, OnePlus 6T.

We should mention that although OnePlus devices don’t lack originality, there have been times when they have taken some inspiration from its sister brands, Oppo and Vivo. For those unaware, Oppo, Vivo and OnePlus have the same parent company, BBK Electronics. An example of the inspiration is the in-display fingerprint scanner that we saw in OnePlus 6T. Like Vivo NEX and Oppo Find X, OnePlus 6T also used an optical fingerprint sensor and not an ultrasonic one.

Coming back to OnePlus 7, the reason why the leak seems credible is that the company seems to be moving towards an all-screen experience with every smartphone. To recall, OnePlus 5T came with thin bezels, OnePlus 6 incorporated the iPhone X-like notch and the latest device by the company, OnePlus 6T came with a waterdop-shaped notch providing users with even more screen space. So it is very likely that the smartphone maker would try to provide users with even more screen space in the upcoming OnePlus 7 by removing the notch altogether. Oppo and Vivo have already gone notchless with Find X and NEX smartphones. While Oppo opted for a camera slider, Vivo opted for a pop-up selfie camera. And the OnePlus 7 image that has surfaced online shows that it will be somewhat like Oppo’s design.

Speaking further about the image, it shows OnePlus 7 kept next to OnePlus 6T, probably to draw a comparison between two mobile phones. As per the picture that has been shared, OnePlus 7 neither has a forehead, nor a chin. The image does not show a selfie camera of the device and it does not even come with a punch-hole display to house the front-facing snapper. However, the speaker grille is placed on the top of the smartphone. So all of this does point towards the possibility of OnePlus 7 being a slider phone. Another significant change is the coloured alert slider, which is very different from the one we saw on OnePlus 6T. It is more like the coloured power button that we saw on Huawei Mate 20 Pro.

Although as of now there is no word on the specifications of the mobile phone, it is expected to be powered by Qualcomm Snapdragon 855 processor, and is likely to come with up to 8GB of RAM. It is also being said that the device will come with the company’s warp charging technology that we first saw on OnePlus 6T McLaren edition.

Avani Baggahttp://www.gadgetbridge.com
Avani has an immense love for reading, travelling and food, but not necessarily in the same order. Avani almost started pursuing law, but life had other (better) plans for her and she chose to be a writer instead (luckily!) She previously covered technology at Times Internet and wrote about smartphones, mobile apps and tech startups. When she’s not writing, you’ll be able to find her in book stores or catching up on her social life.
Facebook
Twitter
WhatsApp
Linkedin
ReddIt
Email
Previous articleSamsung Galaxy S10+ to house a 4,000mAh battery: Report
Next articleApple leak accidentally reveals cool new iPhone, it looks too awesome for words