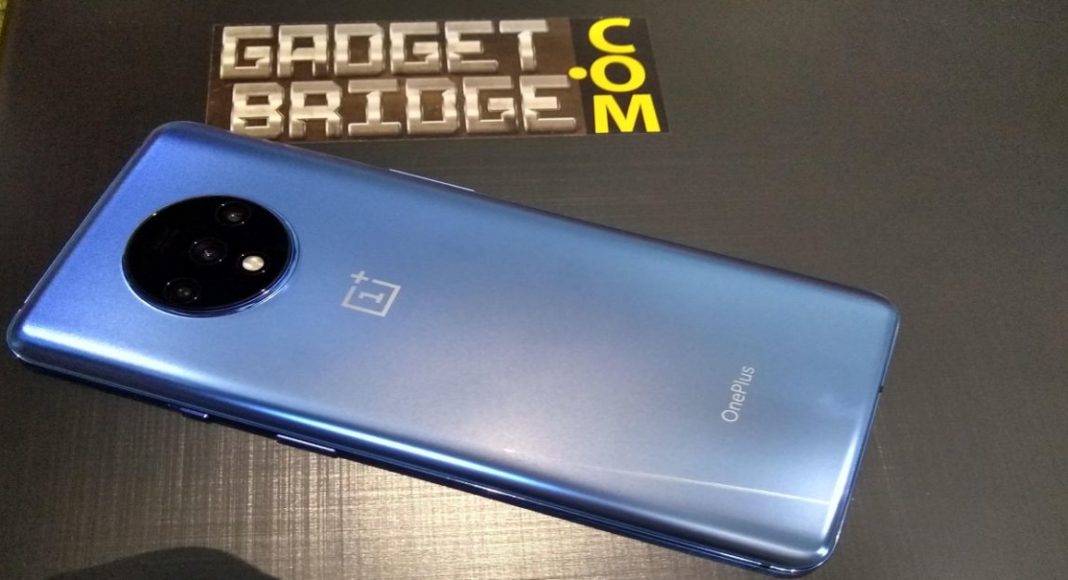 OnePlus has now been the most loved brand when it comes to premium smartphones other than Apple. Its smartphones are best preferred for its design, features and especially for its pricing. Last year we saw the company arrive with 6 smartphones and the latest in the lineup is the OnePlus 7T. The Chinese company launched the phone a few months back in 2019 that comes with all the premium looks and features.

Here we would like to mention that it has now been over three months since OnePlus released the OnePlus 7T and it has been our go-to phone. Well, it has disappointed us on a couple of occasions when I found the features I needed are missing but I am happy to say that most of the time I have been more than satisfied with the device and it has my solid thumbs up. So what’s so great about it and what are the issues you will bump into let’s jump right into it.

So first we would talk about the size of the OnePlus 7T. It comes with slim bezels that are not too wide that make it comfortable to operate. The device is thin as well as lighter and there is no hassle to carry in the pocket. The best part is that the company provides a solid back cover along with the phone that protects it when it accidentally falls from a height and is also durable. Moreover, you get three ways mute switch on the right-side panel of the smartphone, which is again a very innovative feature. You can swipe it up for silent mode, keep in the middle to vibrate and down for ring mode. On the left, there is a volume button. 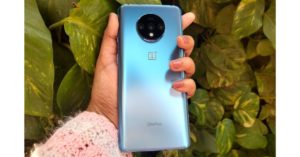 On the back of the phone, the first thing to notice is the huge camera bump. There is nothing new about the camera setup, which looks similar to Motorola G series smartphones. The setup consists of three camera sensors placed horizontally and below you get a flashlight. Also, there is a possibility that the camera bump might get scratches if we put it either on a table or any flat surface. Below the camera setup, you get the OnePlus logo. If we talk about the colour variant for the review we received Glacier Blue and the back panel is also made of glass. 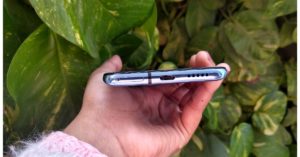 This time the company has gone for Corning Gorilla Glass 5 rather than Glass 6 but during our test nothing major happened to it, so yes it is pretty durable. This may be because of the case that comes with it. Yes, the OnePlus smartphone misses the IP rating so you better keep it safe from water splash or carry the phone in a plastic pouch while travelling when it’s raining. The company has up the game by adding an awesome pair of stereo speakers that are really good. Overall the design is pretty standard there is nothing extraordinary, but one thing we are glad about is that 7T has inherited the 90HZ panel and the HDR 10+ screen. The screen measures 6.55- inches diagonally with a 20:9 aspect ratio and 1,800×2,400 resolution. While every other smartphone company is providing a pop-up selfie camera. This time OnePlus skipped the motorized camera mechanism and provided the device with a waterdrop notch on the top of the screen. 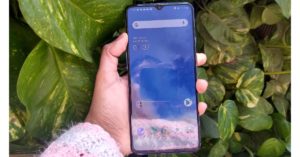 In the past couple of years, OnePlus devices have become to be known for their performance that is super fast. Basically, until now it is the fastest phone in the market. In order to deliver this, Oneplus 7T is powered by a Qualcomm Snapdragon 855+ processor clocked at 2.96 GHz and it comes with UFS 3.0 storage with 8GB of RAM and 128GB/256GB storage options. Sadly the phone does not support MicroSD cards. So far the overall experience of using 7T was good.

Moving on the night mode, in the settings it comes with a colour temperature slider and a light slider with which you can choose from cool to warm colour temperature. This feature is really a bliss for the people who love reading or watching videos at night. The in-display fingerprint scanner works great and is blazing fast compared to other smartphones in the market. Over that, the face unlock feature is fast as well. With the brightness that peaks at 525 nits, the display is very bright. This is the reason we have been able to enjoy watching videos, checking our Instagram feed, browsing the internet while basking in the sun this winter. 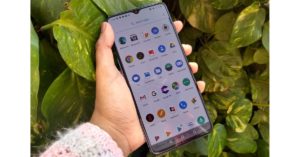 Now moving on to the software part OxygenOS has been one of the smoothest skin among the other smartphones. The handset comes with Android 10 out of the box. Yes, the operating system is skinned with OnePlus’s OxygenOS. Paired with Snapdragon 855+ with OxygenOS and 90Hz screen the smartphone becomes one of the best gaming phones now especially at this price. We played our favourite games like at the highest of settings and we are glad that the company has improved haptic feedback, which makes the games even more fun. It delivers an absolutely no-nonsense experience. You get an almost stock Android feel. But you will find some pre-installed apps such as Amazon Shopping, Amazon Kindle, Prime Video and Netflix, which can also be uninstalled.

About the battery life, it has been good. You get a 3,800mAh battery and it comes with Warp Charge 30T that is claimed to provide 23% faster charging than the Warp charge. On days when we did not game a lot or watched videos the battery lasted for a pretty good amount of time. At the end of the day, we were left with about 25 per cent of charge. So even if you are out of the juice in the middle of the day you can take it from zero to 60%  in half an hour, which is amazing. 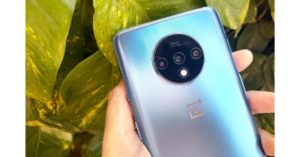 Now moving on to the camera capabilities, if we have to summarise the phone in three words those would be camera, camera and camera. Instead of a vertical rear camera set up the company has adopted a new circular rear camera module similar to Moto G series. The setup consists of three camera sensors. Firstly there is a 48-megapixel Sony IMX586 sensor with f/1.6 aperture offering and Hybrid Image Stabilisation. Then there is a 16-megapixel wide-angle camera lens with a 117-degree field of view and lastly a 12-megapixel telephoto lens. At this price range, we realised that the OnePlus offers the best camera phone in the market.

The most loved feature for us is the macro mode. As the spring season has arrived in the country we love clicking the macro images of beautiful flowers all around. The mode allowed us to get closer to the flowers and we were fascinated with the results it delivered. Below we have attached a few results also. 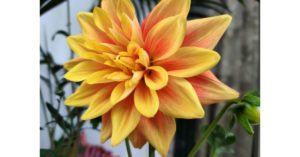 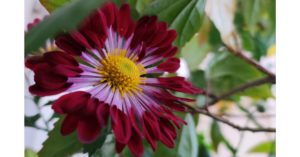 Now coming to the nightscape mode the camera delivered sharp and detailed pictures. Even during low light situations, even the colour reproduction was accurate. During the daytime, the camera managed to click picturesque images. The images were bright and jazzy and we loved the details it represented. Even the zoomed results were surprisingly good. Now coming to the portrait mode, which is again the important part of our camera review process. The depth effect was absolutely natural and delivered profound results. 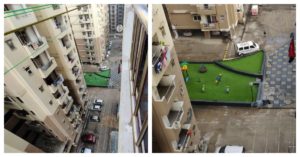 Personally speaking, we loved taking selfies, the device comes with a 16-megapixel front sensor. The selfies came out pretty good in daylight, but we were not impressed with the low light selfies. The low light selfies were not as detailed as we expected, but we managed to click sharp and brighter selfies when the ambient light was good.

Now we are well aware of why the OnePlus smartphone has become the consumer’s first choice in the mid-segment. Firstly, they get a better option as the price is much cheaper than its rivals and secondly it offers high-end features and capabilities at this pricing. And thirdly versatile cameras. 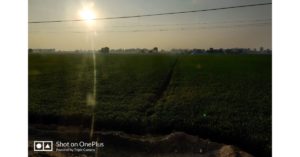 The company offers OnePlus 7T in two variants 8GB of RAM and 128GB of internal storage and its higher-end model has the same RAM clubbed with 256GB of internal storage. The former is priced at Rs 37,999 and the latter is available at a cost of Rs 39,999. To conclude, if you are planning to buy a flagship phone from other brands like Samsung, Apple or Google then you have a worthy competitor in the form of OnePlus 7T, at a lesser price.

Komila Singhhttp://www.gadgetbridge.com
Komila is one of the most spirited tech writers at Gadget Bridge. Always up for a new challenge, she is an expert at dissecting technology and getting to its core. She loves to tinker with new mobile phones, tablets and headphones.
Facebook
Twitter
WhatsApp
Linkedin
ReddIt
Email
Previous article
Sony India launched HT-S20R soundbar in India at Rs 14,990
Next article
Samsung Galaxy A51 review: Good start to the year for Samsung

- Advertisement -
- Advertisement -
OnePlus has now been the most loved brand when it comes to premium smartphones other than Apple. Its smartphones are best preferred for its design, features and especially for its pricing. Last year we saw the company arrive with 6 smartphones and the latest...OnePlus 7T Review (long term): An inexpensive Flagship Killer