the company will also introduce a spatial computing AR app

The Chinese smartphone company Oppo is hosting its Oppo Inno Day 2020 event in China. So, on November 12 that is tomorrow, the company is all geared up to unveil its new concept phone as well as AR applications along with a pair of augmented reality (AR) glasses. The company revealed this through an official post on Weibo. Both the company’s latest innovation will be released via the company’s yearly conference.

For those who are unaware, the Oppo Inno Day 2020 event is a yearly conference that is being held in Shenzhen, China. There will be 3 conceptual products and 2 sets of technical systems.

The recent poster did not reveal much information about the Oppo concept device with a rollable display. But it is expected to roll or retract like LG Wing. However, the company says, “Big screen? Small screen? Infinite screen? In the future, your phone may be able to retract freely”. The official poster only reveals a corner of the phone which is quite distinctive and has curved edges. 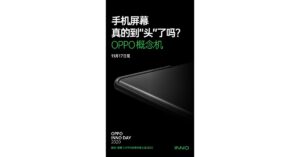 According to a tipster @DigitalChatStation, the new concept phone will have a cloud scroll screen that can be stretched horizontally.

In addition to this, the company will also introduce Oppo AR Glasses on the same day as the Future Technology Conference 2020 (OPPO INNO DAY 2020). This has been revealed by a teaser poster which shows that the AR glasses look similar to regular sunglasses. It has a metal framing as well as a black curtain around the frame to block distractions. The Weibo post says, “Sit 3 metres away and enjoy the immersive experience of a 90-inch large screen.” It will be offering a comfortable experience for its users with two lenses at the corners of which one will be delivering power to the AR system. Also, it is said to include voice or physical buttons and a spatial mic array with 3D surround audio and gesture controls.

Apart from this, the company will also reveal a spatial computing AR app more details on the application will be revealed at the time of the launch. Other than this the company is likely to unveil the Watch RX with a round dial. The Oppo’s own laptops and tablets are also set to make an appearance at this November 17, 2020 show

Komila Singhhttp://www.gadgetbridge.com
Komila is one of the most spirited tech writers at Gadget Bridge. Always up for a new challenge, she is an expert at dissecting technology and getting to its core. She loves to tinker with new mobile phones, tablets and headphones.
Facebook
Twitter
WhatsApp
Linkedin
ReddIt
Email
Previous article
Samsung flagships list of 2021 to include Galaxy Z Fold FE, to terminate Galaxy Note series
Next article
SpaceX’s Starlink reportedly provides 175Mbps Internet speed in adverse weather conditions