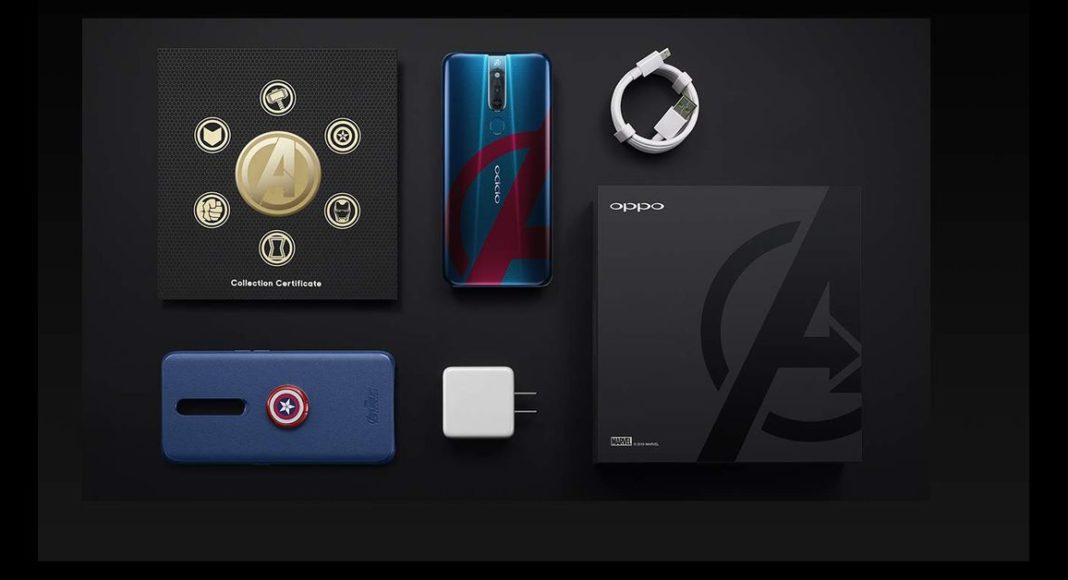 Although most of the specifications, if not all, of the special edition smartphone, are expected to be the same as the vanilla variant of the device, the Oppo F11 Pro Marvel’s Avengers Limited Edition will have a different pattern on its back panel and will come with a number of Avengers-themed accessories.

The company has pointed out that the key difference between the two smartphones is its design and onboard storage. While the vanilla variant of the device comes with 64GB of internal storage, the Avengers: Endgame-themed device houses 128GB of onboard storage.

Coming to the design, the Oppo F11 Pro Marvel’s Avengers Limited Edition comes with a gradient design and a glossy blue finish.

The back panel of the smartphone will come with symmetrical hexagonal patterns that look like a beehive. And besides this, there is a large red-coloured Avengers logo that is placed on the rear of the device. It is also worth mentioning that in the pictures of the device, it can also be seen that its power button comes with a red accent to complement the design of the handset.

Coming to accessories, the Oppo F11 Pro‘s Marvel’s Avengers Limited Edition will come with a Captain America inspired protective case in the box. The Blue coloured case will sport Captain America’s iconic shield, which will also act as a phone stand holder.

In addition to this, the retail package also has a stamped collector’s badge and a ‘Collection Certificate’ that comes with golden stickers of all major Marvel characters including Hulk, Iron Man, and Thor to name a few.

To recall, Oppo F11 Pro features a 6.53-inch full-HD+ (1080×2340 pixels) LCD display that has an aspect ratio of 19.5:9 and 90.90 percent screen ratio. Powered by octa-core MediaTek Helio P70 processor, the smartphone comes with 6GB of RAM, and 64GB of internal storage. Oppo F11 Pro is accompanied by 5GB of Oppo Cloud storage. Besides this, the company has also touted its HyperBoost technology for speeding up app launch times. The smartphone runs Android 9 Pie skinned with ColorOS 6.