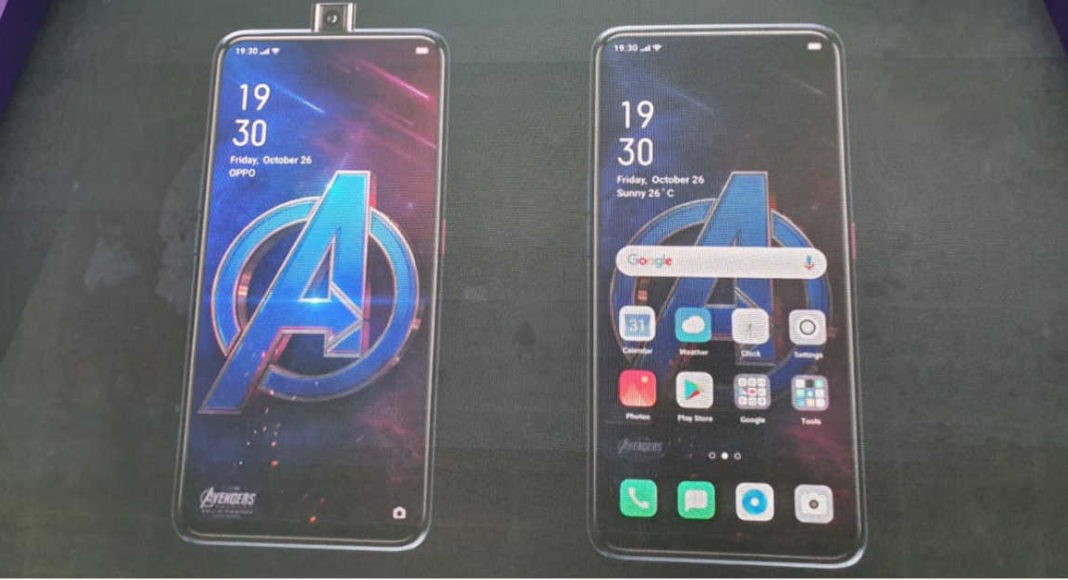 Although the device has a lot in common with the vanilla variant of the Oppo F11 Pro, the primary differences are in the design and the internal storage. Here’s a look at the details of the newly launched edition of the smartphone that you should know about:

Oppo F11 Pro Marvel’s Avengers Edition is available with 6GB of RAM and 128GB of internal storage in India. The special edition smartphone costs Rs 27,990 and will be going on sale via  Amazon India’s website. The pre-orders of the device begin today and the first sale will be on May 1. The sale will begin at online retailers on May 4.

As we mentioned earlier, there are two primary differences in the Marvel’s Avengers Edition smartphone as compared to the vanilla variant of the handset. One is the design of the new smartphone and the other is the internal storage.

Oppo F11 Pro Marvel’s Avengers Limited Edition smartphone’s back panel has a glossy Blue finish and a gradient design. It sports a symmetrical hexagonal pattern on its rear panel that resembles a beehive. In addition to this, there is an Avengers logo that is Red in colour that is placed on the back panel of the Oppo F11 Pro’s special edition device. The power button is also coloured Red so that it complements the design of the handset.

Oppo F11 Pro Marvels’ Avengers Edition comes with a Captain America inspired protective case in its box. The case is Blue in colour and has Captain America’s iconic shield on it. This can also work as a phone stand holder for the smartphone.

The smartphone’s retail package has a stamped collector’s badge and a ‘Collection Certificate’. The latter is something that all Marvel fans would love to have as it has golden stickers of all the major characters like Hulk, Iron Man, and Thor to name a few.

While Oppo F11 Pro’s regular variant came with 64GB of internal storage, the Marvels’ Avengers Edition handset houses 128GB of onboard storage. Besides this, all the specifications of the special edition variant of the device are the same as the previously launched model.

To recall, Oppo F11 Pro has a 6.53-inch full-HD+ LCD display with a 19.5:9 aspect ratio and is powered by an octa-core MediaTek Helio P70 processor clubbed with 6GB of RAM. The handset runs Android 9 Pie skinned with ColorOS 6 and houses a 4,000mAh battery.

For imaging duties, Oppo F11 Pro sports a dual rear camera setup that comprises of a 48MP and 5MP sensors. The device is touted to come with an Ultra Night Mode and a Dazzle Color Mode that enhances low-light photography. The handset has a 16MP pop-up selfie camera that comes with support for Face ID technology.

Avani Baggahttp://www.gadgetbridge.com
Avani has an immense love for reading, travelling and food, but not necessarily in the same order. Avani almost started pursuing law, but life had other (better) plans for her and she chose to be a writer instead (luckily!) She previously covered technology at Times Internet and wrote about smartphones, mobile apps and tech startups. When she’s not writing, you’ll be able to find her in book stores or catching up on her social life.
Facebook
Twitter
WhatsApp
Linkedin
ReddIt
Email
Previous articleTo avoid crunch and extreme overtime, Respawn will slow down Apex Legends’ updates
Next articleFacebook bans the famous ‘Personality Quiz apps’ to avoid a second Cambridge Analytica data leak