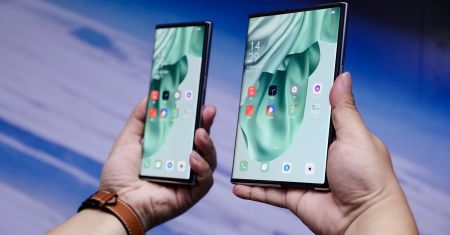 Though we saw that with the second-generation Galaxy Z Fold 2 and the LG Wing that carries a bulkiness of an extra screen At the Inno Day 2020 yearly conference Oppo Unveiled Oppo X 2021 rollable phone display seems to resolve the bulkiness issue. As it offers a bigger display, basically a tablet-sized when you need a big sized screen and retracts back to a normal-sized phone when you need a compact one. Therefore the 6.7-inch phone can expand up to a 7.4-inches screen as easily as you slide a window. It has an OLED panel that extends with the help of its 6.8mm Roll Motor. For this concept, the company has filled 122 patents of which 12 have been done for the scrolling machinery.

The rollable phone is made of a special 2 in 1 plate that supports its when the display is extended or contracted for durability and support structure. As per the company the support panel has two parts out of which one is sliding out while giving rigid support to the display for a flat surface.

At the event, Oppo Chief 5G scientist Henry Tang said, “Compared with foldable technologies, rollable displays are a lot more adaptable as they are adjustable between the minimum and maximum sizes for different use case scenarios.”

For additional protection, the company has also added a customised Warp Track is a 0.1mm laminate to protect the screen. However, the company did not reveal more about the internal and actual release of its concept phone Oppo X 2021 but it hopes to bring this technology at the right time. 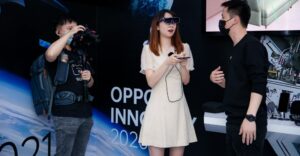 Oppo’s augmented reality glasses is the next device which the company unveiled during the event. The Oppo AR Glasses are confirmed to arrive next year in the market. It has time-of-flight (ToF) sensors that use simultaneous localization and mapping (SLAM) algorithms to gauze the area around the user. The glasses are claimed to offer a view as if you are sitting and enjoying watching videos from a distance of 90 meters.

The AR glasses can be easily connected to the Oppo Find X2 smartphone via USB-C cable which boosts the performance as well as touch and swipe controls during navigation. Also, it is touted to map 21 points on a hand to interact with virtual objects and buttons.

Komila Singhhttp://www.gadgetbridge.com
Komila is one of the most spirited tech writers at Gadget Bridge. Always up for a new challenge, she is an expert at dissecting technology and getting to its core. She loves to tinker with new mobile phones, tablets and headphones.
Facebook
Twitter
WhatsApp
Linkedin
ReddIt
Email
Previous articleTwitter introduces Fleets for sharing momentary thoughts
Next articleNokia 2.4 confirmed to launch in India on November 26