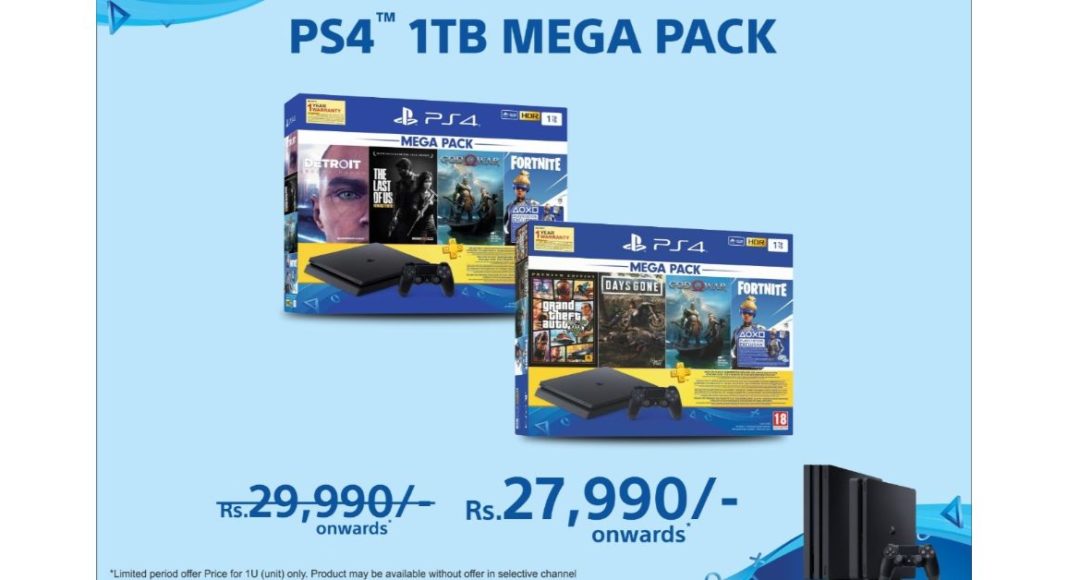 The Japanese electronics major recently increased the price of both the variants of PS4 gaming consoles in India. Amid coronavirus when people as well as children are taking the support of gaming devices to reduce their boredom staying at home to maintain social distancing, the company said that the older price was intended for promotional purpose only. Now the company has announced a limited period special offer on PS4 consoles.

According to the company all PS4 1TB mega pack, which also includes the recently launched 1TB GTA V, God of War, Days Gone, Fortnite DLC Voucher along with code for 3 months of Playstation plus subscription bundle will now be available at Rs 2,000 cheaper than before. The company has reduced the price from Rs 29,990 to Rs 27,990 in the country. The company says that this offer is available only until stock lasts.

Sony PlayStation 4 slim price hiked by up to Rs 2000 and Pro model was upped by Rs 1,720 in the country. After the price revision the consoles have gotten more expensive in India and it cost Rs 38,710 for Pro 1TB model whereas the Slim 1TB came with a new price tag of Rs 29,990. The company had also listed both the products with their updated prices on Sony India website as well as on the e-commerce website Flipkart and Amazon.

The news is rife that as the sales of PS4 hits 110 million Sony has also confirmed the release date for its upcoming gaming console PS5. The gamers and the whole industry has been waiting in anticipation for the company to announce its next release. According to the company, PlayStation 5 will be out in time for Christmas. As per the previous rumours, PS5 was expected to arrive in mid-November.

But according to a new report the company has not released a concrete date for the launch, but it’s not coming anytime sooner than holiday 2020.

“Regarding the launch of PlayStation 5, although factors such as employees working from home and restrictions on international travel have presented some challenges in regards to part of the testing process and the qualification of production lines, development is progressing with the launch of the console scheduled for the 2020 holiday season,” Sony said.

Komila Singhhttp://www.gadgetbridge.com
Komila is one of the most spirited tech writers at Gadget Bridge. Always up for a new challenge, she is an expert at dissecting technology and getting to its core. She loves to tinker with new mobile phones, tablets and headphones.
Facebook
Twitter
WhatsApp
Linkedin
ReddIt
Email
Previous articleSony HT-G700 soundbar supported by Dolby Atmos, DTS:X launched
Next articleCOVID-19 lockdown: 7 Mobile games that will help Android users fight boredom while staying at home