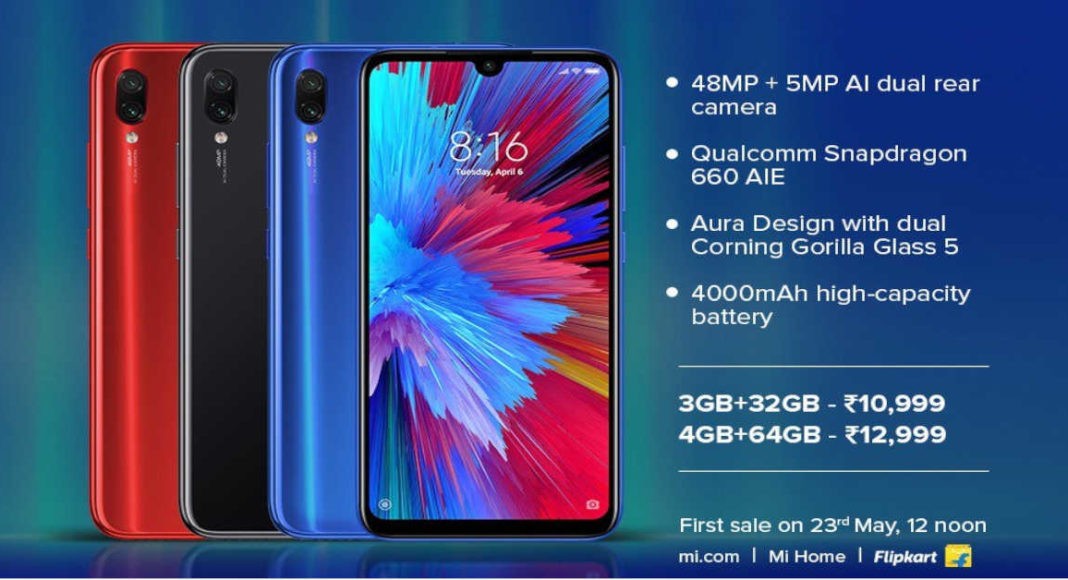 Xiaomi’s recently launched smartphone – Redmi Note 7S – has gone on open sale in India today. The smartphone comes with a 48MP camera and was unveiled by the Chinese handset maker last week.

The Redmi Note 7S smartphone is available in two storage variants in India – one with 3GB RAM and 32GB storage, and the other with 4GB RAM and 64GB storage. The handset is now available via open sale on Flipkart, Mi.com and Mi Home Stores. The company announced about the device going on open sale in India via a tweet yesterday.

As we mentioned earlier, the new smartphone from Redmi has already gone on sale twice in India. Its first sale was on May 23 and the second one was on May 29.

The smartphone lies in between the Redmi Note 7 Pro and Note 7 in terms of price and specifications. However, the company announced soon after the launch of the smartphone that it will be discontinuing the Redmo Note 7 in India.

The Redmi Note 7S smartphone has support for dual SIM cards and it runs Android 9.0 Pie skinned with MIUI 10. The handset features a 6.3-inch full-HD+ (1080×2340 pixels) Dot Notch display that has an aspect ratio of 19.5:9. Powered by an octa-core Qualcomm Snapdragon 660 SoC, the Redmi Note 7S smartphone comes with up to 4GB of RAM and has up to 64GB of internal storage.

For imaging duties, the Redmi Note 7S sports a dual rear camera setup that comprises of a 48MP primary sensor that has an f/1.8 aperture clubbed with a 5MP secondary sensor. The handset even has a 13MP sensor on its front panel that has support for AI Portrait mode and AI Face unlock.

The smartphone can hold a microSD card of up to 256GB and for connectivity, it comes with 4G VoLTE, Wi-Fi, Bluetooth v5.0, GPS, USB Type-C port, and a 3.5mm headphone jack. Sensors on the Redmi Note 7S include an accelerometer, electronic compass, ambient light sensor, distance sensor, fingerprint sensor, and an infrared sensor. The smartphone houses a 4,000mAh battery that has support for Quick Charge 4 fast-charging technology.

Avani Baggahttp://www.gadgetbridge.com
Avani has an immense love for reading, travelling and food, but not necessarily in the same order. Avani almost started pursuing law, but life had other (better) plans for her and she chose to be a writer instead (luckily!) She previously covered technology at Times Internet and wrote about smartphones, mobile apps and tech startups. When she’s not writing, you’ll be able to find her in book stores or catching up on her social life.
Facebook
Twitter
WhatsApp
Linkedin
ReddIt
Email
Previous article
Samsung Galaxy Note 10 to go ‘buttonless’; will ditch the headphone jack: Report
Next article
Call of Duty: Modern Warfare trailer released, the game will release on October 25