Samsung Galaxy F62 set to launch in India on February 15 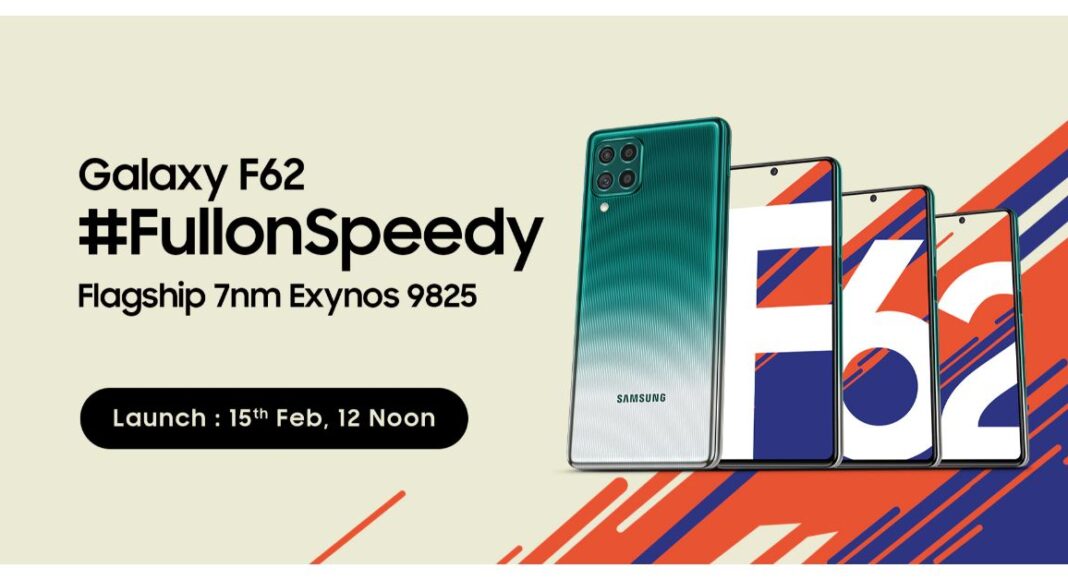 After appearing on Samsung’s official support page in India and several rumours and leaks Samsung has officially announced to launch Galaxy F62 in the country on February 15. The upcoming device is the second phone to launch after F41 which launched in the country back in October last year to its newest F-Series. As per the latest teasers, the smartphone will be powered by Exynos 9825 SoC based on the 7nm process.

Samsung Galaxy F62 is set to launch in India on February 15. The company has also created a dedicated Flipkart page which reveals that the phone will launch at 12 noon in the country. In addition to this, the front, as well as the back of the Galaxy F62, has also been revealed via Flipkart page. Although the company has not shared much about the device, it confirmed that the phone will be priced between Rs. 20,000 and Rs. 25,000. Earlier a tipster also tipped that the phone would be priced less than Rs 25,000.

Speaking of the design and specification Samsung Galaxy F62 has been revealed in a green variant. There is a square-shaped camera module consisting of four camera sensors and a centrally positioned hole punch on the front display to house a selfie camera. The company confirmed that the upcoming F-Series phone will be powered by 7nm octa-core Exynos 9825 SoC with an AnTuTu score of over 4,52,000 and a Geekbench 5 score of 2,400.

In the previous report Galaxy F62 is expected to have a 7,000mAh battery. Furthermore, there will be a 6.7-inch sAMOLED display and might also feature a quad rear camera setup that comprises a 64-megapixel primary sensor. It is speculated to pack a 32-megapixel front camera and the reports claimed that the smartphone will run Android 11-based One UI 3.1 out-of-the-box. Powered by an Exynos processor the device is likely to come with  6GB of RAM and 128GB of internal storage.

The Geekbenck results also suggest that the F62 will be offering a flagship-level experience with a  multi-core score of 2,401. On the other hand, the mobile also appeared on the Bluetooth SIG site with model number SM-E625F_DS in the past suggesting Bluetooth 5.0 support on the handset.  Some of the reports also shared that the production of the smartphone has begun at the Greater Noida Facility in the Delhi-NCR region.

Komila Singhhttp://www.gadgetbridge.com
Komila is one of the most spirited tech writers at Gadget Bridge. Always up for a new challenge, she is an expert at dissecting technology and getting to its core. She loves to tinker with new mobile phones, tablets and headphones.
Facebook
Twitter
WhatsApp
Linkedin
ReddIt
Email
Previous article
Poco sold over 150,000 units of Poco M3 on its first sale in India, next sale on February 16
Next article
Molekule Air Mini – Air Purifier with PECO Filtration Technology launched in India