The device is suggested to launch soon in India 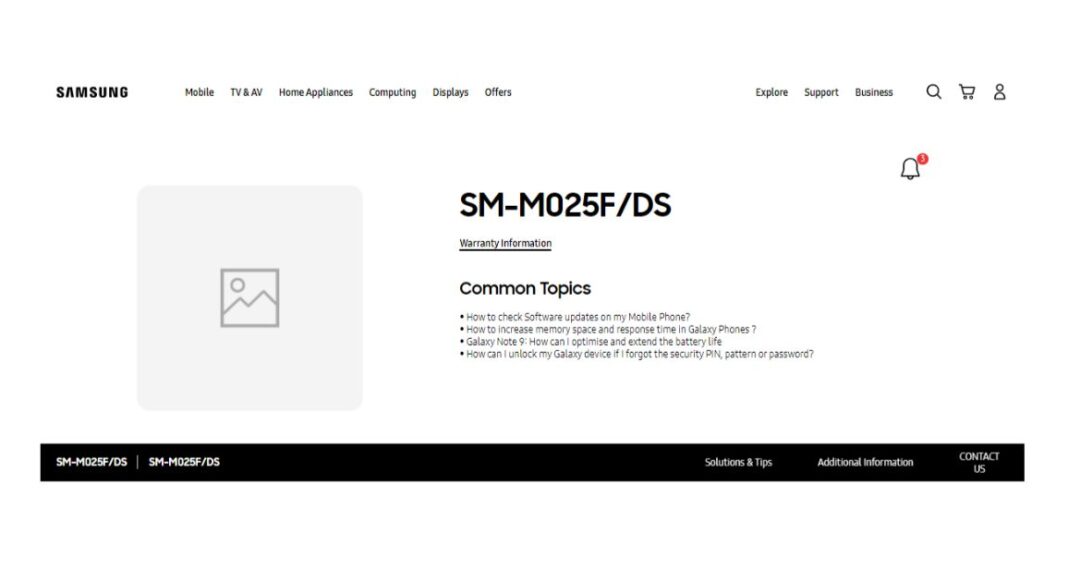 Recently Samsung Galaxy M02 was spotted on the Bureau of Indian Standards (BIS) certification website hinting at launch. In a new development, the company’s upcoming budget smartphone purportedly appeared on the Samsung India site suggesting the imminent launch of the device.

Samsung Galaxy M02 has reportedly been spotted on the company’s India website with a model number SM-M025F/DS. However there is no confirmation whether this is the same device but it goes in line with the recently spotted BIS listing, benchmark listing and Wi-Fi certification surfaced online.

However, the support page on the official website doesn’t reveal any information pertaining to Samsung Galaxy M02 but carries queries related to how to increase memory space and response time in Galaxy Phones. So the Galaxy M-series phone is speculated to be arriving in India soon.

The listing on the Bureau of Indian Standards (BIS) certification website reveals that the upcoming Samsung smartphone will have dual-SIM functionality. While the Geekbench listing with the same SM-025F model number suggests the device to ship Android 10 out-of-the-box. The phone’s single-core score is 128 and has achieved a multi-core score of 486. Furthermore, the device is expected to be powered by an octa-core Qualcomm Snapdragon 450 SoC, paired with 3GB of RAM.

On the other hand, the Bluetooth SIG certification reveals two phones with model numbers SM-M025F_DS and SM-A025F_DS with the name Galaxy A02s. The same name with a different model number, therefore, suggests that the Samsung Galaxy M02 is likely to be a rebadged variant of Galaxy A02s or Galaxy A02 for certain regions.

In addition to this, the device also appeared in the Wi-Fi Alliance listing with the same model number SM-M025F/DS. The listing reveals the phone will support 2.4GHz Wi-Fi.

Whereas the Nemko AS website has suggested multiple Samsung devices with SM-A025F/DS, SM-A025F, SM-M025F/DS, SM-A025M/DS, and SM-A025M. All the devices are assumed to be Samsung Galaxy A02 whereas SM-M025F/DS model number, therefore, supports the speculations that Galaxy M02 is likely to be rebranded Galaxy A02.

Some of the reports claim that Galaxy M02 is also going to be fuelled by a 5,000mAh battery. All the information associated with the Samsung Galaxy M02 is so far a part of the rumour mill and you can take it with a pinch of salt.

Komila Singhhttp://www.gadgetbridge.com
Komila is one of the most spirited tech writers at Gadget Bridge. Always up for a new challenge, she is an expert at dissecting technology and getting to its core. She loves to tinker with new mobile phones, tablets and headphones.
Facebook
Twitter
WhatsApp
Linkedin
ReddIt
Email
Previous articleTop 10 smartphones likely to get Android 11 0S update
Next articleFacebook News to be launched in UK in January 2021