Twitter just added a new feature to its live broadcast.

Microblogging website Twitter has just rolled out an update for its Android app. With the latest update, Twitter users who access the Android app of the platform will now be able to add up to three people to their live broadcast. The new feature is a part of update version 8.2.0-release.69 and is 17.38MB in size.

Twitter has been pushing the live-streaming feature on its platform for a very long time now. With the latest feature of the app, people would not only be able to live stream various events but will also have the option of adding others to their live broadcast.

With live streams, Twitter wants people to bring out all the sides of a story. So, you can use it for anything that you like. You can live broadcast events, shows, or just use it to show people something that is happening in real time. While until now, one could only give their own opinions in a live stream, by adding up to three people, more point of views about the same event can be shared.

Last year, the microblogging website announced via its own platform that it will now be putting live streams and broadcasts started by accounts that users follow at the top of their timeline. The company said that this would make it easier for people to see events happen in real time. Twitter further added that these would include breaking news, personalities and sports. 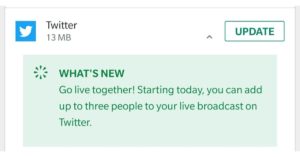 The feature was made available for Android as well as iOS. If you don’t know how to begin a live broadcast on Twitter, here are the steps that the company has mentioned on its website: