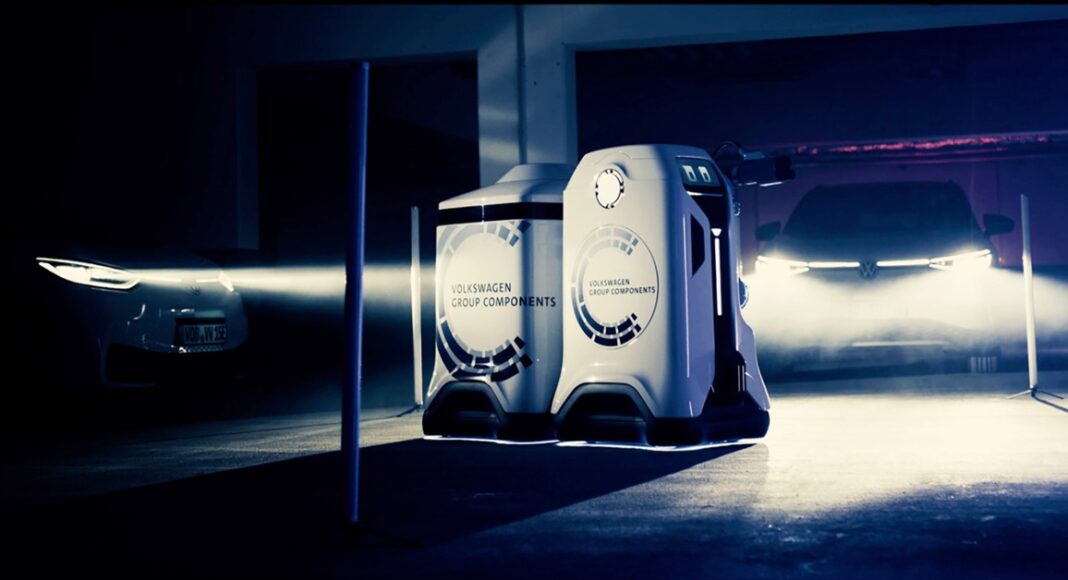 In what seems to be the visionary charging concepts that Volkswagen hopes will expand the charging infrastructure over the next few years, the company has now provided a first glimpse of the prototypes of its mobile charging robot. The robot provides fully autonomous charging of vehicles in restricted parking areas, like underground car parks.

“A ubiquitous charging infrastructure is and remains a key factor in the success of electric mobility. Our charging robot is just one of several approaches, but is undoubtedly one of the most visionary,” said Thomas Schmall, Volkswagen Group Components’ CEO.

Started via an app or Car-to-X communication, the charging robot operates totally autonomously. Volkswagen further stated that this wonder machine steers the vehicle to be charged and also communicates with it like opening the charging socket flap to connecting the plug and decoupling it.

“Setting up an efficient charging infrastructure for the future is a central task that challenges the entire sector. We are developing solutions to help avoid costly stand-alone measures. The mobile charging robot and our flexible quick-charging station are just two of these solutions,” said Thomas Schmall, CEO of Volkswagen Group Components.

The business unit is currently working on a complete DC charging family. The flexible quick-charging station will be launched onto the market in early 2021. For several weeks now, the DC wallbox has been trialled at different company’s German production sites. The mobile charging robot has successfully reached prototype status and will now be comprehensively further developed. One of the prerequisites for market maturity is Car-to-X communication to facilitate the autonomous charging process.

In future, Volkswagen Group Components will be amongst other things responsible for all Volkswagen Group charging activities and charging systems. The intention is to integrate the charging robot into an overall concept that will focus on the long-term success of electric mobility, and thus the electrification of transport.

“Establishing a charging infrastructure is a fundamental prerequisite for this. But it needs to be demand-led and efficient. Our developments do not just focus on customers’ needs and the technical prerequisites of electric vehicles. They also consider the economical possibilities they offer potential partners,” said Schmall.

The LG further added that the developments also enable the operators of parking bays and underground car parks to quickly and simply “electrify” every parking space using the mobile charging robot. This reduces any construction work needed, at the same time reducing the potential cost.