Xiaomi’s POCO F2 with Android Pie gets listed on Geekbench

Rumours and reports about Xiaomi’s POCO F2 smartphone have started surfacing online. As the name suggests, the smartphone is the successor of the company’s POCO F1 smartphone, which garnered a lot of appreciation for offering high-end specifications at an affordable price. The upcoming Xiaomi POCO F2 has been spotted on Geekbench and the listing has given us an insight into its key specifications. 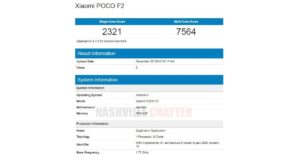 Xiaomi POCO F1 was launched in the Indian smartphone market in August this year to compete with Asus ZenFone 5Z and OnePlus 6 at a price of Rs 21,999. Recently, Xiaomi slashed the price of the smartphone by Rs 1,000.  In fact, when OnePlus 6T was launched, the company also started its ‘Do the maths’ campaign on social media to promote the fact that it is offering similar high-end specs at a much more affordable price. While some appreciated it, others believed that OnePlus 6T was indeed a much better smartphone.

Coming back to the Geekbench listing, it revealed that POCO F2 smartphone will be available in 6GB RAM and 8GB RAM variants. Xiaomi’s upcoming device has scored 2,321 and 7,564 in the single and multi-core scores of Geekbench. It is also worth mentioning that the Geekbench listing carries December 28 as the upload date.

The Geekbench listing of Xiaomi POCO F2 was first spotted by Nashville Chatter. Earlier this week, the Chinese smartphone brand launched the 6GB RAM/128GB storage model of its POCO F1 Armoured Edition smartphone. The has already gone on sale in India and is priced at Rs 23,999. If you are someone who is likely to use more storage in a smartphone, you can opt for the top-of-the-line variant of POCO F1 Armoured Edition that comes with 8GB of RAM and 256GB of onboard storage.

Gadget Bridge Bureauhttp://gadgetbridge.com
Facebook
Twitter
WhatsApp
Linkedin
ReddIt
Email
Previous article
WhatsApp will not work on these smartphones after December 31
Next article
Last few days to get your iPhone battery replaced by Apple at Rs 1,500: All that you should know